Focus on enforcement and training as liquefaction casualties continue

New training and testing facilities come with a commitment from Indonesia authorities to address the issue, but the application and enforcement of rules is a complex process riddled with commercial pressures and insufficient industry awareness at a quayside level.

The disappearance of the Indonesia-flagged Nur Allya bulk carrier last month with 25 seafarers on board was just the latest in a deadly list of casualties pinned on cargo liquefaction problems. And yet enforcement of rules and training has continued to be found wanting in the very places it is needed most. In this extended special report Lloyd’s List asks whether enough is being done to enforce safety standards and stop further liquefaction deaths 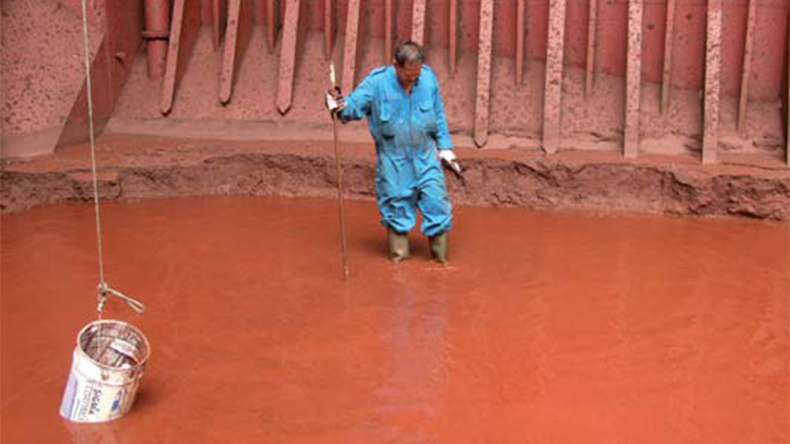 THE regulatory framework aimed at reversing the ‘liquefaction casualties’ that have claimed more than 100 seafarers’ lives over the past decade has suffered from poor enforcement, “unscrupulous practices” and commercial pressures squeezing out widely ignored safety standards. This is compounded by a general lack of training and awareness in the countries in which it is needed most.

But there are initial signs that the tide may finally be turning.

The Indonesian government has been gradually stepping up training and testing regimes, focusing on inspections at loading ports and working proactively with shippers to raise awareness of the dangers of moisture levels in cargoes suspectable to liquefaction.

New guidelines on handling hazardous materials have been adopted and the government opened a new laboratory testing facility in Jakarta in June. There is also a new training centre due to start operations next month with the help of the Australian Maritime Safety Agency.

While such steps may sound limited in the wake of nine very serious casualties linked to liquefaction issues that could have been avoided with the correct application of safety standards, the awareness programme represents a recognition that adopting standards is meaningless without robust enforcement and commitment to training.

The disappearance of the 52,378 dwt Indonesia-flagged Nur Allya bulk carrier last month with 25 seafarers on board, has once again prompted a resurgence of industry calls for extra vigilance when handling such cargoes, especially during monsoon season in southeast Asia.

The vessel, which was loaded with nickel ore on a domestic run in Indonesian waters from Weda island in North Maluku to Morosi in Southeast Sulawesi, issued a distress signal on August 20, according to Lloyd’s List Intelligence reports. The search and rescue effort, which was hampered by bad weather conditions, was called off after 18 days.

While an investigation by Indonesian authorities is yet to reveal the cause of the incident, experts in the dry bulk industry who spoke to Lloyd’s List suspect that liquefaction was responsible for the sinking of the vessel and the loss of its crew.

Calls and emails to the vessel’s owner Perusahaan Pelayaran Gurita Lintas Samudera requesting comment as to the nature of the incident were not answered.

Transport attache at the Indonesian embassy in London Lollan Panjaitan said that while the cause of the casualty was still unknown, he hoped to have clear answers “soon” so that further investigations could be carried out primarily by Indonesia’s National Transportation Safety Committee to enable further improvements.

Cargo failure and liquefaction has been responsible for claiming the lives of 101 seafarers in nine bulker casualties that took place over a 10-year period to 2018, by far the biggest cause of lives lost, according to Intercargo, the International Association of Dry Cargo Shipowners. Six of the incidents were related to nickel ore carriage from Indonesia.

Intercargo expressed deep concern for the missing seafarers and dismay about those who may have contributed to the tragedy. Once again, they called for a prompt investigation to establish the cause, but everyone involved is well aware that this is now a regular occurrence, where such calls appear to have limited impact on changes being made at government level.

The common factors in cases of liquefaction are well understood by industry officials and safety analysts. Cases continue to emanate from jurisdictions in which the national political environment may not be what one expert described to Lloyd’s List as “conducive to safety rigour, particularly where the economy is bolstered by cargoes that may liquefy”.

This inevitably results in pressure on many stakeholders. Appropriately competent testing facilities may not easily be available and even if they are, the testing itself requires significant rigour to ensure that appropriate representative samples are taken. That’s easier said than done, when these places are often susceptible to variations through actual mining processes or simple weather conditions for a product that is stored in the open prior to loading on board ships. It’s also important to note that initial testing is often reliant on the traditional ‘can’ test to gauge what is known as the Transportable Moisture Level.

That is fine if the test is carried out with sufficient understanding and any ‘failure’ is appropriately actioned, but inevitably, shippers prefer not to have the disruption caused by adherence to regulations or being told that their cargo might liquefy and endanger the ship.

There are instances in which shippers are ignorant of the International Maritime Solid Bulk Cargoes Code, although it is often in the chartering process that greatest education is required.

In both instances, the national maritime competent authority needs to ensure that knowledge from IMO is transferred to the landside and appropriately enforced.

All these issues are well understood by the technical officials from Indonesia who attend IMO meetings, but enforcement at a national level has been a persistent issue for the Indonesian government.

That is now, however, being addressed, according to Mr Panjaitan.

The country has taken “important steps so that the carriage of dangerous goods can be understood and implemented by all stakeholders,” Mr Panjaitan told Lloyd’s List in response to questions.

“I agree with the sustainable efforts to improve enforcement and implementation of procedures to avoid future accidents,” he said, adding that each party needs to know and carry out its respective duties with the supervision of the competent authority, and supported by cultural awareness that “safety is first”.

In early September, Norwegian insurance provider Skuld issued an alert on the dangers of nickel ore liquefaction in Indonesia and the Philippines after a near-miss in August during a tropical storm.

Gard, another Norwegian provider, urged vigilance after it received 35 geofencing alerts since December 2017. Although no signs of liquefaction were found by surveyors, the practice of misdeclaration of moisture content was still prevalent, it said.

“Masters and ships’ crew can experience significant pressure from shippers when they refuse to load the cargo and request independent testing,” it said in an advisory in June.

“While the mandatory notification requirement is in place for shipments originating in the Philippines and Indonesia, Gard encourages members to seek advice on any cargo subject to liquefaction if they have any doubts or questions relating to its carriage,” it added.

“Shipowners, charterers and Gard share a common goal to avoid another liquefaction tragedy through active loss prevention, communication and education.”

In May, the 56,098 dwt New Beginning bulker reported that part of its nickel ore cargo started to liquefy in inclement weather conditions, and was listing by up to 10 degrees, but the vessel managed to safely navigate back to New Caledonia, according to the Lloyd’s List Intelligence’s casualty report.

A ban on Indonesian nickel ore exports, which  was brought forward to January 2020 from 2022, while hitting supramax demand, should lead to a decline in liquefaction-related incidents for the international fleet, but domestic trades may rise, posing further risks, according to Braemar-ACM.

A side-effect of the loss of the Indonesian material “will be the reduction in international trade for what has been seen as one of the most hazardous cargoes in the market,” the brokerage said in a note.

“The change in trade flows may just represent a transference of physical and operational risk for shipping rather than wholesale removal. For though the risk of a liquifying cargo for the international fleet may decline, one assumes that domestic Indonesian nickel ore shipments are set to increase, focusing the risk on the vessels and crew participating in that trade instead,” it added.

An individual “schedule” or how to guide for nickel ore was adopted in 2013, two years after the code came into force (previously nickel ore was included in a generic “mineral concentrates” schedule for cargoes which may liquefy). There are requirements for safe handling and storage of the cargo, and to carry out testing for moisture content prior to loading as well as monitoring on voyage.

The IMSBC code has undergone several amendments to include what is known as individual schedules for other types of cargo such as bauxite and coal.

The IMO has launched a new course on the safe handling and transport of solid bulk cargoes to intensify its efforts towards training, implementation and compliance, in particular to tackle the dangers of liquefaction. The course was compiled by authorities in China, and reviewed by a group of member states co-ordinated by Japan.

The decision to develop the course, which includes case studies, multiple choice questions, and practical work, was made at the sub-committee on the Carriage of Cargoes and Containers last year, and was introduced in a workshop at the IMO during CCC this year, held between September 9-13.

“Along with the development of new provisions and amendments, it is equally important to ensure proper implementation and enforcement of the IMSBC code and other relevant IMO instruments,” said Jack Westwood-Booth, senior deputy-director for the IMO’s maritime safety division.

“This organisation has worked diligently for many years to improve the safety for ships transporting of solid bulk cargoes by sea,” he said, adding that over the years, the IMO has made every effort “to stay vigilant and proactive in this regard”.

But the course is not mandatory, an IMO spokesperson said, and it is up to member states to include the course in respective maritime training programmes.

“This specific training course will be freely available to all member states,” the spokesperson said, adding that if resources were limited, the IMO would be able to provide funding from the Technical Co-operation programme.

“Everyone has an interest as no-one wants to see the loss of people, ships or cargo.”

“A lot has been done in the research of iron ore fines and bauxite cargoes and even coal cargoes for liquefaction issues,” said BIMCO’s manager for maritime information Ai-Cheng Foo-Nielsen.

“While there are regulations, it is a matter of enforcement and implementation of procedures,” she said, adding that in her experience at the shipping association based in Denmark, shippers do not always fill out cargo declaration forms correctly, posing difficulties for owners.

The views were echoed by Intercargo, which welcomed the development of the course, as further training and subsequently greater understanding of the safe carriage of cargoes was ultimately beneficial.

“However, in our opinion, the effective implementation of the IMSBC Code by the member states is critical,” said the group’s technical manager Ed Wroe.

“The code, mandatory under the Safety Of Life At Sea convention, requires the shipper to provide the appropriate information to the vessel that enables a cargo to be carried safely. It is Intercargo’s strong belief that accurate cargo information, provided by the shipper, is the cornerstone for the safe carriage of bulk cargoes.”

Indonesian nickel ore-carrying supramax feared lost with 25 on board

Intercargo says most loss of life due to liquefaction