Greek owners maintain a remarkable share of the world crude tanker business, but is the rapidly growing position in liquefied natural gas shipping their greatest achievement?

Years of experience in tanker ownership and operation are common credentials of today’s liquefied natural gas carrier owners, and this certainly applies to Greece-based owners 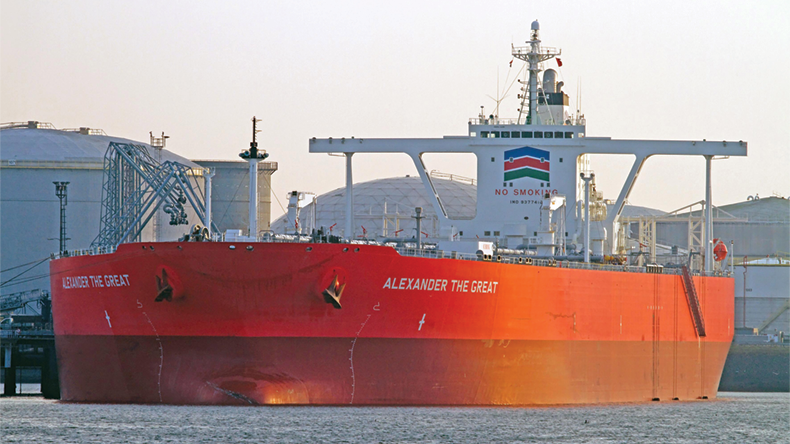 In recent years, Greeks have collectively controlled about a quarter of world oil tanker capacity.

At the same time, it appeared to be one of the first occasions when a Greece-based company’s experience with LNG has fed back into the tanker business.

The owner has developed the pioneering project under discussions with Shell and talks are also believed to have taken place with Total — although at the time of writing, none of the ships, if the order is confirmed, have yet been chartered.

The speculative approach would replicate other Capital newbuilding programmes for tankers — and, in particular, its debut series of LNG carriers still under construction at HHI. The group is known to have assembled a highly knowledgeable LNG team for its entry in that sector and has drawn on it for the envisaged series of 320,000 dwt tankers.

The first hint that freighter-owning Greeks might make a splash in the tanker market came immediately prior to the Second World War, when Aristotle Onassis envisaged the world’s then-largest tanker newbuildings.

For the three decades after the war, Onassis, fellow Golden Greek Stavros Niarchos and the Goulandris family originating from Andros seemed to vie among themselves to build ever-larger tankers.

In recent years, Greeks collectively have controlled about a quarter of world oil tanker capacity. The Union of Greek Shipowners has recently cited statistics showing that this has risen to almost 32% for crude tankers, while about 15% of the world chemical and products carrier fleet is also under Greek ownership.

“Greeks historically are mostly island people and their essence is in trading,’ says Basil Mavroleon of WeberSeas, a veteran tanker broker. “It’s all about instinct. The big Greek owners have always gone for the big ships, and the glory and glamour has been in the crude tankers. That’s where they make the most money.

“From a practical investment standpoint, if you can afford the bigger payload, you stand to make a higher return.

“With products, you can secure a few years’ employment. You make marginal returns, but the bank likes you and you can get finance. You can’t do that with a very large crude carrier, but they have the stamina to weather the markets until once in a while they make big money.”

According to Mr Mavroleon, it was the dry cargo fleet that pre- and post-Second World War were the “donkeys” that earned the steady returns that allowed owners to go into tankers.

During the 1990s, many Greek owners committed to investment in double-hulled tankers but did not earn a return until after 2000.

“Starting then, they piled in,” Mr Mavroleon recalls. “They saw the fleet had to be replaced and that they could build and buy cheaper than ever — and they jumped on while no one else did.

“Greeks are very good at operating ships and willing to do it in accordance with regulations. I think they are the best at it.

“Oil majors are very comfortable with Greek owners,” he says. “They have proven over time their operating expertise and they have shown themselves willing to be flexible to some degree. They work for the relationship and deliver a service.”

As a result, more Greek owners than ever are on majors’ internal approval lists.

“They are betting on the tanker market again now,” he says. “You can see it.”

No matter how impressive the achievement of Greek tanker companies in remaining at the top of the sector for many years, it is surely rivalled by how they have leveraged their tanker experience to become a leading force in the liquefied natural gas shipping sector in a 15-year span.

Years of experience in tanker ownership and operation are the common credentials of today’s LNG carrier owners and this certainly applies to all Greece-based owners that have diversified into the sector. 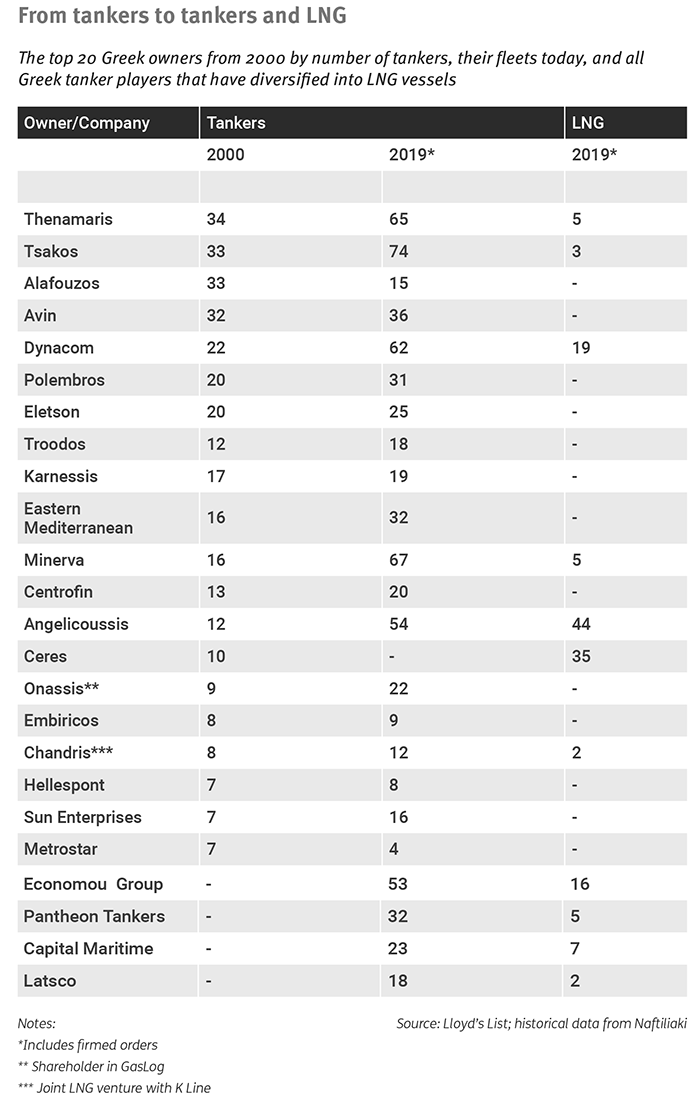 Looking at the top 20 Greek tanker owners at the millennium, by number of tankers, more than a third have gone on to enter the LNG space.

The massive Greek investment in LNG carriers, which now runs to something like $25bn, will undoubtedly have had an impact on the amount of spending by those groups on tankers. However, it is hard to detect from the trend seen over the past two decades.

As much as the charge into LNG may be impressive, it is rivalled by the expansion in tankers. Few of the leading Greek tanker companies in 2000 have failed to increase their fleets and some have done so exponentially while also managing to launch themselves as LNG carrier owners.

The most remarkable of these double-headed expansions have been those of Angelicoussis, George Prokopiou’s Dynacom Tankers and Dynagas, and the Martinos brothers’ companies, Thenamaris and Minerva Marine.

Special mentions among the class of 2000 should go to the Tsakos Group, which has more than doubled its tanker fleet and is cautiously expanding its footprint in LNG; and the Onassis Group, which has dynamically rebuilt its presence in big tankers during the past few years and, at the same time, has become a strategic investor in GasLog, founded by fellow Greek giant Peter G. Livanos.

Mr Livanos is an outlier among the major Greek tanker owners of two decades ago, having now quit the tanker sector altogether.

He merged the Ceres tanker fleet of 16 suezmaxes and two aframaxes with Euronav back in 2005 and subsequently served as Euronav’s chairman at the time of its stocklisting in New York.

However, in the past few years, his shipping interests have focused primarily on building up GasLog in the premier division of LNG carrier owners.

Probably thanks to Ceres’ historic participation in the company, Euronav — while not a Greek shipowner — today manages virtually its entire fleet of VLCCs and suezmaxes from Athens.

Shipowners that, at 2000, either had a fledgling presence in tankers or were yet to burst upon the world include George Economou, whose group now spans DryShips, Ship Ventures Holdings and TMS Cardiff Gas.

A more recent player of note is Evangelos Marinakis-led Capital Maritime, which established itself in crude and product tankers prior to the recent launch of Capital Gas.

Another shipowner that had yet to register as a leading tanker operator in 2000 was the Anna Angelicoussi-led group, which now includes wet arm Pantheon Tankers, as well as Alpha Gas.

Over time, the upper echelons of the Greek tanker league table have evolved, with the entry of important new players.

These include the Navios Group, which was taken over by Angeliki Frangou in 2005 and subsequently transformed. The group’s dynamic growth included the launch of Navios Maritime Acquisition in 2008 as the focus for its expansion in tankers.

Two decades ago, Diamantis Diamantidis-led Marmaras Navigation was already a force in the dry bulk sector, but the launch of sibling company Delta Tankers, now highly active in the suezmax and VLCC sectors, would not come until 2006.

The dry bulk to tankers path has also been notably trodden by Andreas Hadjiyiannis of Cyprus Sea Lines, who launched Hellenic Tankers in 2011.

It has become one of the most prolific buyers of older tanker tonnage, including five VLCCs in the past two years. The most recent was the Mitsubishi-built Oriental Jade, purchased for a bargain $25m this summer.

However, it is the continuing surge of investment by Greeks in the LNG space, putting them on course soon to rival Japanese owners as the dominant nationality in the sector, that really catches the eye.

With debut orders last year by Capital, Minerva and Latsco, there are now 11 Greece-based owners involved in the LNG market.

According to Richard Gilmore, an LNG shipping expert who joined Angelicoussis gas shipping arm Maran Gas Maritime in 2004, the development of the Greek-owned LNG fleet has been “remarkable”.

He says: “On the technical level, the two areas are dealing with hydrocarbons. Carrying dangerous cargoes gives added importance to following industry guidelines to ensure the ships are properly operated.

“Technically, the LNG ships are more sophisticated, more automated, with more instrumentation and that requires a certain level of sophistication — more than you see on the tankers, perhaps.”

Currently 57 LNG carriers, including the first Greek-owned floating storage regasification units — about half the world’s orderbook — are on order for Greek companies.

Mr Gilmore observes that market trends may favour Greek shipowners more than some of the traditional players in the sector.

“It is moving towards a more dynamic market, towards portfolio players, with more cargo sources and a more diversified customer base rather than the monolithic projects that were the norm in the past,” he says.

“There are more ports, shorter contracts. I would say that the guys who have been in the tanker space are probably more mentally accustomed to that world and they may find it easier to adapt to the changed landscape on the commercial side.”