The UK Ship Register has launched a bold new strategy to become the best performing international flag in the world, focused on quality metrics and a long-term vision committed to customer service. 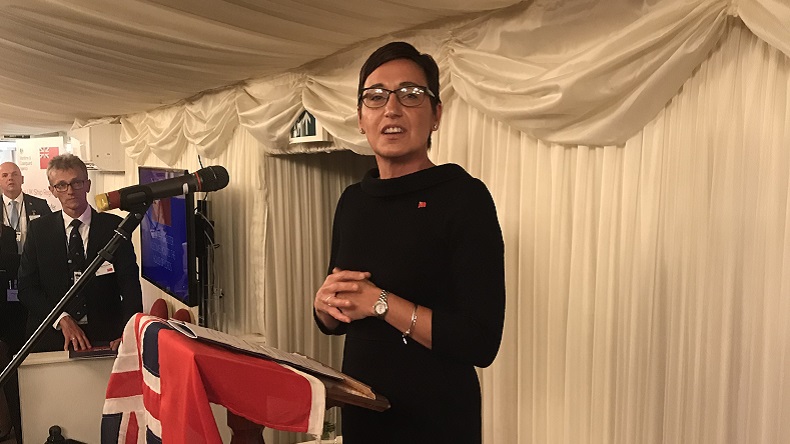 Katy Ware during a discussion at London International Shipping Week.

THE UK Ship Register has come out fighting in the wake of its pre-Brexit volume slump with a new vision to become “the world’s best performing international flag”.

The strategy, which focuses on quality metrics and a significantly reduced growth target, was launched amid a slew of new government targets and supports for UK shipping throughout London International Shipping Week.

The political uncertainties of the UK’s exit from the European Union has seen over 30% of vessels flagged to the UK leave in the past 12 months, including heavy hitters such as CMA CGM, which pulled 49 of its ships from the UK “in light of Brexit and to avoid any uncertainty in the period with our fleet status and regulations”. That in turn resulted in a government U-turn on the UK policy that had previously targeted a doubling of the flag size to 30m gt.

However, flag officials are confident that the Brexit impact has now stabilised and, having conducted a root and branch review of the flag and its remaining customer base, are confident that underlying quality of operations will support a recalibrated growth strategy of 12.5% over the next 12 months.

“We’ve listened and we’ve identified what we need to do to build a truly excellent UK Flag,” said Katy Ware, director of maritime safety and standards at the UKSR as she addressed a London International Shipping Week reception at the House of Lords on Wednesday evening.

Behind the scenes Ms Ware and her team have been interviewing customers, potential customers and those who have left citing commercial Brexit pressures, amid what she describes as a “period of inward reflection. The feedback offered specific areas for development which have been addressed or are underway, however the quality of flag operations was never questioned.

By focusing on a series of internal metrics around consistency of delivery and external benchmarks including QualShip21 and positioning on the Paris and Tokyo Memorandum of Understanding port state control league tables, Ms Ware is confident that the new vision to become the world’s best-performing flag can be measured and delivered.

In terms of tangible changes to flag operations, a new digitalisation strategy is already underway with an online registration portal currently being tested. Surveyor training programmes are being reviewed.

The real focus, however, according to Ms Ware is on the customer focus that the UKSR’s strategy will deliver.

“Customer focus has to date been tactical and in some cases short sighted… my goal is long-term strategic partnerships,” she told Lloyd’s List.

In terms of what that means for the recalibrated growth targets, UKSR officials are casting their net wider than ever in search of owners to flag in the UK.

The UK is the ninth-largest shipowning nation by value, according to VesselsValue, which puts the flag’s current fleet value $30.7bn. By way of comparison, the top two nations, Japan and Greece, boast values of $107.3bn and $105.6bn respectively.

However, the ratio of that ownership does not necessarily translate into flag value. The UK is currently the 20th-largest flag state by value, with a total value of just $5.34bn, compared to the top two flag states, Panama and Marshall Islands, with values of £117.3bn and $99.73bn respectively.