The new 2050 energy forecast by DNV GL suggests that in almost any scenario LNG will be the single most important in the fuel market. Ammonia comes next but hydrogen is almost irrelevant. Gas prices and new global regulations will significantly affect the uptake of alternative fuels by 2050.

LNG as a fuel could take up over 40% and ammonia 25% of marine fuel market in 2050, according to new forecast 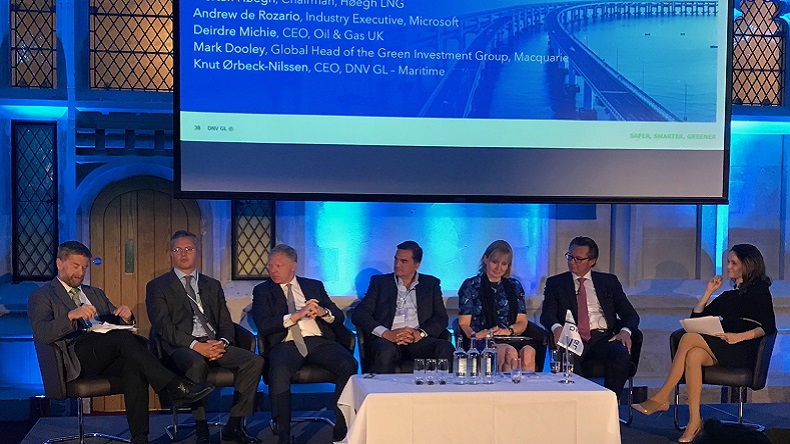 Panel discussion at a DNV GL during LISW.

THE world’s largest classification society has downgraded the prospects of hydrogen playing an important role in decarbonising global shipping, as its expects liquefied natural gas and ammonia will play a starring role over the 30 years.

DNV GL released its annual forecast with projections about the global energy market until 2050, estimating that global energy demand will peak in 2033, as energy efficiency ramps up.

The forecast includes projections for the maritime industry, which has pledged to at least halve its emissions by mid-century, a task that will require alternative fuels.

Asked during a panel discussion during London International Shipping Week whether it is crazy to think that hydrogen could fuel large vessels in the near future, DNV GL maritime chief executive Knut Ørbeck-Nilssen said that was “nearly crazy”.

Mr Ørbeck-Nilssen said hydrogen should not be ruled out as an alternative fuel overall, but it was important to target the right segment, which for him was the shortsea shipping segment, to pilot it as a solution.

“To me this is a little bit like we are jumping way too far into the future. We should still research it. It is still an interesting option that should be tested, piloted. For deepsea shipping, I don’t see it as a viable alternative,” he said.

Hydrogen often comes up in discussions around zero emissions vessels and on the best chances the industry has to meet its decarbonisation commitments. Notable shipping companies such as CMB have thrown considerable public weight behind it. But in DNV GL’s forecast it is barely visible in the maritime sector.

Maritime energy demand will peak in 2027, according to DNV GL. New regulatory policies and fuel prices will drive the marine fuel market over the next 30 years.

Maritime will rely heavily on liquefied natural gas, a fossil fuel that can offer some reductions in GHG emissions, under DNV GL’s scenarios to meet global climate change targets.

The IMO has committed to reducing the shipping’s total annual GHG emissions by 50% by 2050 compared to 2008 and aim towards zero as soon as possible.

LNG alone will not be sufficient to achieve this, as it reduces emissions by around 20% compared to heavy fuel oil.

In one of DNV GL’s scenarios, future regulation will focus heavily on the design requirements of newbuildings to meet the targets.

“This projection assumes that current ships and those built in the next 20 years will not make a major shift to alternative, carbon-neutral fuels. This will require a complete fuel shift on newbuildings from 2040 to reach the IMO targets,” DNV GL said in the report.

LNG is the single biggest marine fuel, claiming 41% of the market by mid-century under this scenario. But with this complete fuel switch arriving in 2040, ammonia will emerge forcefully and claim up to 25% of the market by 2050. Overall, around 60% will be fossil fuels.

Hydrogen claims just 1% of the marine fuel market by 2050.

“The preference for NH3 (ammonia)  is due to the lower cost of the converter and storage compared with H2 (hydrogen), and the lower price compared with other bio- or electrofuels. Uptake of H2 is limited to a small number of smaller ships; this is due to high investment costs and technical constraints,” DNV GL said in a statement.

It emphasised, however, that alternative fuels would face the same chicken and egg dilemma that LNG as a fuel has faced.

“Without any infrastructure and distribution, it is difficult for shipowners to commit to a new fuel, but suppliers will not develop the infrastructure before they are certain of demand,” it said.

In the other scenario, the focus is on operational requirements of vessels and alternative fuels are gradually introduced in the market.

Under this policy approach, LNG would reign dominant with 70% of the market, 13% carbon-neutral methane and the remaining 17% other carbon-neutral fuels.

If there are no further policies undertaken to reduce emissions and all the industry has is the IMO’s commitment, 93% of the market will comprise fossil fuels in 2050, with LNG claiming 50%.

The dominance of LNG in all cases is largely driven by projected declines of gas fuel prices towards 2050, DNV GL explained. Fuel price increases could significantly distort this anticipated makeup of the marine fuel market.

Gas carriers and tankers brace for opposite fates

The more efficient use of energy globally will have direct ramifications for the shipping sector. DNV GL forecast that between 2030 and 2050 the average annual percentage growth in tonne-mileage of seaborne trade will be just 0.3% compared with 3.7% between 2010 and 2018.

For some segments, however, the decline will be acutely more painful than for others.

Demand for oil is expected to peak in the mid-2020s and oil, along with coal, will face a rapid decline from 2030 onwards. Gas is expected to be the single biggest energy source in 2026.

Under this reality, DNV GL expects the crude oil tanker to have the smallest average annual growth rate in tonne-mileage than any other segment between 2018 and 2030 at just 1.5% and suffer a 2.1% average annual decline between 2030 and 2050.

Meanwhile, natural gas trade will have the highest growth rates during these two periods at 7.2% 3.2% and respectively. Bulker trades will fall by 0.1% annually on average between 2030 and 2050.