With containerships now reaching the 24,000 teu mark, fighting fires on board has become an almost impossible task. The onus now needs to be on preventing misdeclared cargoes getting on board in the first place

Containership fires are hard to contain, so focus needs to be on prevention, not firefighting 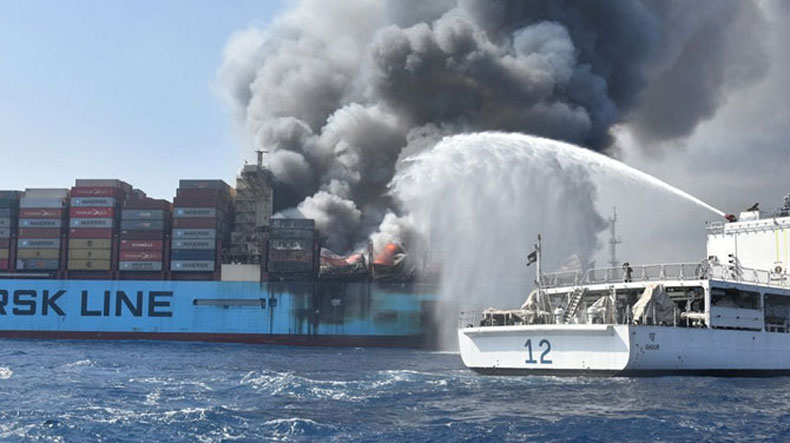 Containership fires have become more difficult to fight as ships get larger.

THE ever increasing size of containerships and the frequency of fires on board has again raised the issue of protecting vessels from misdeclared dangerous goods shipments.

A seminar hosted by shipping consultants LOC and Clyde & Co during London International Shipping Week heard that fire-fighting equipment on modern containerships was not fit for purpose, and that the design of the ships made it nearly impossible to fight a fire once it had taken hold in a container stack.

Vessels were only required to have two seawater pumps for on deck fires, and CO2-based prevention systems could only work in enclosed holds, and even then were a “single-shot” solution that had to work the first time.

With stacks on deck getting higher and wider, it was difficult and dangerous for crew to even attempt to fight on-deck fires.

With controlling fires being so difficult, effort should instead be put into avoiding the cause of fires, which was usually the incorrect stowage of exothermic dangerous goods such as calcium hypochlorite, one of the most frequently misdeclared hazardous cargoes.

“It seems to me that prevention should be given some more thought,” said Clyde & Co head of cargo casualty Jai Sharma.

“You have increased risks when you have these greater numbers of containers on board.”

The risk of carrying a misdeclared container might be around 0.01%, he said.

“On a small ship you can live with that as it is very unlikely you’re ever going to get one misdeclared container. But if you have 20,000 teu it is quite likely there is going to be misdeclared cargo on every single voyage. No one will know unless something goes wrong.”

Even if misdeclarations were excluded from the reckoning, the carrier still had to identify each container properly and put it in the right place to comply with its safe stowage obligations.

“The more containers you have the more likely someone is going to press the wrong button on the computer,” Mr Sharma said.

“There is a significant risk that is expanded greatly by the large size of containerships.”

He suggested a traffic light risk assessment system that would give a green light to known shippers with a consistent record of accurate cargo declarations, and a red light going to those known to ship hazardous cargoes.

“You need a proper risk assessment,” Mr Sharma said “The carrier has to exercise due diligence to ensure the vessel is seaworthy but his often looks only at the physical state of the vessel. It seems to me this isn’t enough, when we have information and experience, to then just take the cargo on trust.”

Additional steps that carriers should consider were effective firebreaks and firefighting equipment on board.

“If you have a deck fire, there is no division except for the accommodation block to stop the fire spreading,” Mr Sharma said.

But a senior figure at a major container shipping line, speaking under Chatham House rules, argued against the suggestion that the onus needed to be on box carriers.

“The key point in my mind is prevention,” he said. “Misdeclaration is a very big issue. We can add to the firefighting systems, but when most of the cargo is in the open air the only thing we can add is water.”

He added that there was still room for discussion over the responsibility for prevention and for verification.

“I’ve heard that it should be the carrier that should make the checks on the type of cargo, but this moves the responsibility from those responsible to the carrier,” he said.