British banks were ‘no good at shipping’ even prior to their withdrawal from the sector, but can bounce back by financing green shipping and digitalisation initiatives, one of the world’s leading shipping financiers argues

‘Frankly, British banks were no good at shipping. They lost a lot of money and it wasn’t very important to them,’ says Citigroup shipping and logistics chair 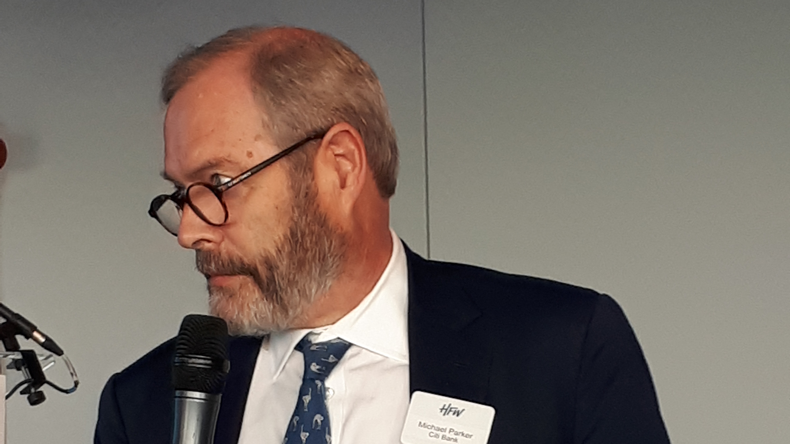 Parker: ‘London, as a financial market, should have some form of rated liquid market available for small and medium-sized companies.’

BRITISH banks were “no good at shipping” even prior to their withdrawal from the sector but can bounce back by financing green shipping and digitalisation initiatives in the future, one of the world’s leading shipping financiers has argued.

Attendees also heard Scottish shipowner John Denholm insist that socialist governments can be good for shipping companies if not for shipowners, while Clarksons chief executive Andi Case warned that millennials want the industry to adopt the environmentalist agenda.

Mr Parker — a Briton who has long-worked for an American bank — commended the PricewaterhouseCoopers study on London’s maritime cluster, commissioned by Maritime London and published on Monday to mark the start of LISW.

The report, titled Catching the Wave, clearly identified finance as a major weakness of the UK capital as a shipping centre. But Mr Parker did not pull his punches, claimed that no British bank is now lending to shipping following the withdrawals of RBS and Lloyds from the niche sector.

“Frankly, British banks were no good at shipping. They lost a lot of money and it wasn’t very important to them,” he said.

Mr Parker also highlighted the Oslo bond market, which offers quick and pain-free access to capital, as something London could profitably emulate.

“London as a financial market should have some form of rated liquid market available for small and medium-sized companies,” he added.

The way forward is to concentrate on digitalisation, innovation and technology, perhaps with government support, he averred. This should be possible outside the European Union.

The second surprise claim of the event came from John Denholm, chief executive of J & J Denholm, the Glasgow-based family company that is one of Britain’s last substantial shipowners.

While he expressed concern about the current heated state of British politics, which he said could lead to a more left-wing government prone to raise taxes, he was sanguine at the prospect.

“Socialist governments have been good for shipping companies, if not for owners,” he remarked.

He broadly commended Britain’s current taxation arrangements, even though he pays 45% tax on his earnings above £150,000.

“Who can complain about paying top rate tax, given all the services and support that the British taxpayer provides to you? It’s not a bad deal.”

Foreigners can elect for non-dom status, only paying tax on UK earnings.

Company shares can be passed on to children without inheritance tax, a position more favourable than in many competitor countries.

“I am a great supporter of the British flag,” added Mr Denholm. “It has served us well over the years. It is backed up by the Royal Navy to protect British shipping, and that is a great advantage.”

Mr Case said Clarksons was proud to be an important part of the UK maritime cluster, and is completely committed to Britain, seeing no contradiction between that and being a global company.

Given the funding gap for more environmentally friendly ships types, Mr Case backed Mr Parker’s assertion that this represents an opportunity for the London maritime cluster.