Alternative fuels are a big piece of the puzzle for shipping’s sustainability requirements during the next 30 years. But their use may have to be encouraged by making carbon consumption more expensive 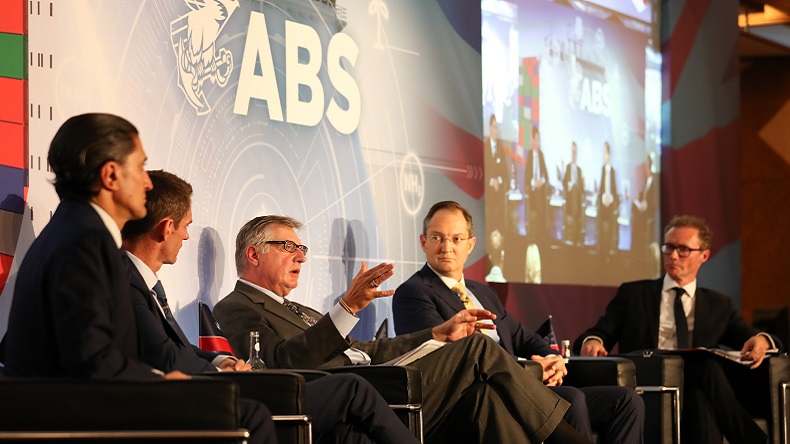 Panel discussion at an event hosted by ABS during London International Shipping Week.

IMPOSING speeding tickets and charging shipowners a premium on hydrocarbons have been described as realistic and acceptable measures to cut maritime’s greenhouse gas emissions.

An international agreement to reduce shipping’s total annual GHG emissions by at least 50% by 2050, combined with unilateral commitments by some states to achieve zero carbon emissions, have put pressure on the industry to conjure up ideas on how to achieve these goals.

While most agree that alternative fuels and propulsion technologies will be necessary, putting a direct price on carbon emissions to dissuade from consuming fossil fuels is also an option.

The measure is contentious and members of the shipowning, investor and classification side have somewhat different views on the matter, according to the view expressed during London International Shipping Week.

John Michael Radziwill, chief executive of dry bulk owner Goodbulk and vessel manager C Transport Maritime, said he would have no problem with paying a premium for using hydrocarbons.

He supported by Rasmus Bach Nielsen, global head of wet freight at Trafigura, who said there should be a premium on the use of hydrocarbons, using a benchmark based on today’s prices.

Others, however, were more cautious.

JP Morgan head of global transportation Andy Dacy said that the key question around carbon pricing is what the tax is used for, arguing that carbon trading system in Europe, which was revised last year, failed.

“That is an example of how blanket taxation without refining is not the right sort of approach,” he said

The head of the world’s third-largest classification society argued that a combination of liquefied natural gas propulsion, vessel speed and operation optimisation could allow the industry to meet the International Maritime Organization’s 2030 target for a 40% reduction in relative carbon consumption of the industry compared with 2008.

Both Mr Bach Nielsen and Mr Radziwill advocated the introduction of regulated speed limits to immediately curb emissions from the global fleet.

Mandatory speed limits have received criticism on several accounts but a crucial one is enforcement.

A simple answer to that could be issuing speeding tickets for vessels violating rules, according to Mr Bach Nielsen, arguing that implementing a system that tracks and penalises those vessels that speed should not be difficult.

Trafigura is already working on a policy that requires shipowners to disclose the level of carbon emissions when moving its cargo, information that should be valuable if speed limits are enforced.

“If you steam a very large crude carrier from Houston to South Korea it is not difficult to figure out at what speed it is sailing. It is very easy,” said Mr Bach Nielsen.

Mr Dacy suggested fines could be linked to components like finance, insurance and even classification for owners.

Violators would be taxed on their emissions and the payments could go into a carbon fund, said Mr Bach Nielsen.

“I think it is possible, but you do need somebody to police it,” he added.

“We need the IMO and we need political leadership,” he said.

GoodBulk and Trafigura are two of the 120 companies that openly called on the IMO to regulate speed on ships earlier this year.

The IMO’s last high-level environmental meeting failed to decide on the measure, as many countries fuelled by concerns about the potential rise in the cost of transportation. That same committee reconvenes in April 2020 where it is expected to discuss the matter again.

Political and broader financial implications aside, critics of the policy argue that it stifles innovation by incentivising older ships and that if implemented for some time could cause more ships to hit the water, ultimately offsetting or even exacerbating the level of emissions.

But Mr Radziwill appeared convinced it is the right approach and denied some of these accusations. He reiterated that the industry should avoid overcapacity driven by incentives to deploy marginally more efficient tonnage.

Instead, owners and operators should try using their existing ships more efficiently while deploying measures like speed limits and using latest technology.

Another criticism against speed limits is that it is primarily motivated by financial considerations as it raises the freight costs and therefore revenues from chartering.

Mr Radziwill acknowledged that as a positive side effect to speed limits but further argued that with a general lack of available financing, owners will have to squeeze money out of charterers.

“If we want new capital to come into our industry we should be getting it from our charterers,” he said.

As a major charterer, Trafigura would have no issue paying higher freight rates, provided there is a level playing field with its competitors, Mr Bach Nielsen said.

The Lloyd’s List Podcast: Red flags in a sea of transparency