It is now clear that scrutiny from multiple government agencies globally is increasing, but anecdotal evidence from security analysts and industry experts suggests that risk mitigation measures from shipping companies is not keeping pace with the enhanced scrutiny and technological advances that allow contraventions to be exposed

The saga of the Adrian Darya 1, now expected to deliver its cargo of 2m barrels of Iranian crude to Syria in direct contravention of its release agreement, is an embarrassing political episode, but it should not be written off by shipping as an anomalous example of deceptive political posturing — there is a risk to the wider industry that must be addressed

WHEN Gibraltar released the oil tanker Grace 1 last month, it did so with the explicit written assurance from Iran that its cargo of 2.1m barrels of Iranian crude would not end up in Syria.

Fabian Picardo, Gibraltar’s chief minister, even went so far as to hail the detention and subsequent release “a success” on the basis that Gibraltar’s actions had “deprived the Assad regime of circa $140m”.

The fact that Adrian Darya 1, as it is now renamed, is currently skirting the Syrian coast with its AIS offline, awaiting what the US intelligence services expect to be an imminent ship-to-ship transfer, which will ultimately see its cargo end up in Syria, is politically embarrassing for almost everyone except Iran.

Our reliable and uncompromised vessel intelligence tool is designed to deliver the connections needed to navigate the complex global shipping landscape with ease and elevate your business to new heights. Gain access to:

It is not, however, an anomalous trade limited to Iranian crude seeking a buyer amid tightened US sanctions. Nor is it an episode that can be written off by the wider shipping industry as an issue for the intelligence services to worry about.

When US Secretary of State Mike Pompeo made clear on Friday that the US authorities were tracking Adrian Darya 1’s intention to deliver crude to Syria, the US Treasury simultaneously reiterated a warning to the wider shipping industry that any companies found to be assisting the ship, knowingly or otherwise, would find themselves targeted by US sanctions.

While few legitimate shipping businesses would knowingly test such cautions, the reality is that very few companies have the resources to perform due diligence robustly enough to unravel the highly complex networks of operations that support such trades.

Such is the concern from shipping companies wishing to avoid inadvertently falling foul of US scrutiny via unverified third-party providers, that several security companies approached by Lloyd’s List have confirmed that clients are now regularly asking for satellite verification of potential charterers and suppliers to verify trade details and voyage history before contracts are signed.

Such costly due diligence that often requires funding satellite time and geospatial analysis may not yet be commonplace, but it is growing and it is indicative of the risk mitigation priorities now being employed by companies that would be crippled by the consequences of US sanctions should they be caught off-guard. 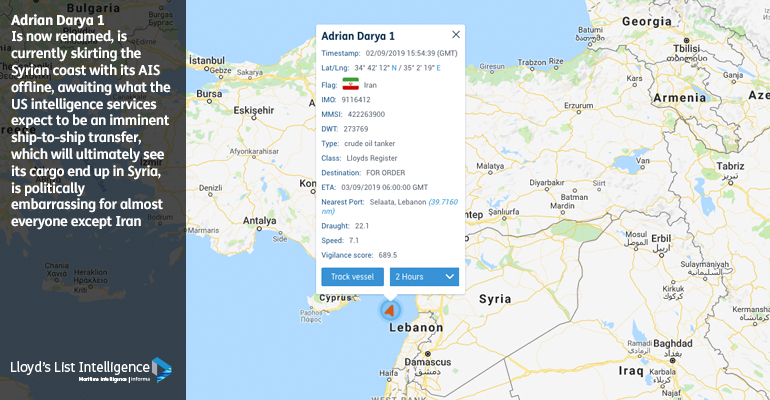 While the Grace 1/Adrian Darya 1 saga is currently the highest-profile case of opaque shipping practices, it is only one example of what the US Treasury has described as “deceptive practices by shipping companies obfuscating the destination and recipient of oil shipments”.

As of Monday evening, Adrian Darya 1 was heading north up the Syrian coast, however its precise location was made more difficult to track after it switched off its AIS signal at around 16:00GMT. It is awaiting what analysts predict will be a ship-to-ship transfer via one of a handful of Iranian-linked tankers thought to be in the region, also currently with no Automatic Identification System signals active. Silvia 1, a 159,711dwt, Iran-flagged tanker, disappeared from AIS view on August 29 having entered the Mediterranean via the Suez Canal, expected to deliver its cargo to Syria’s Banyas refinery. Stark I, a 159,681 dwt, Iran-flagged crude tanker, took a similar route, also dropping off AIS late on August 30. Another Iranian tanker, the 159,981 dwt Sarak, exited the Suez on Monday and if the pattern repeats, it will shortly ‘go dark’.

Meanwhile, the Comoros-flagged suezmax Savior looks like it may be currently discharging Iranian crude to Banyas. Its AIS was switched off on August 28 as it approached Banyas after a period of active storage off Turkey, having originally loaded at Khor al Zubair via a ship-to-ship transfer. 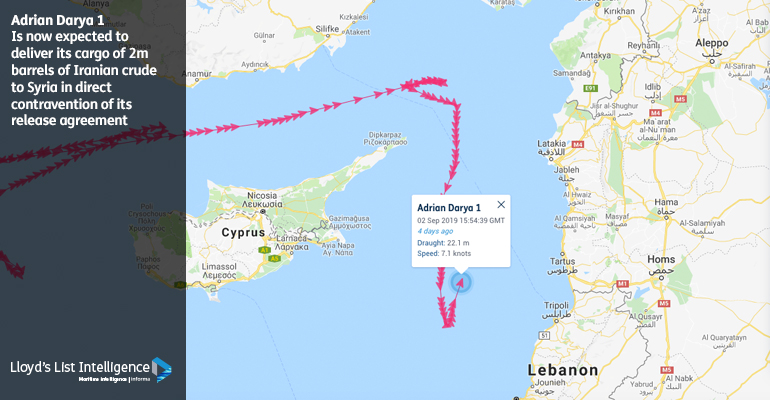 Any one of these tankers may ultimately offer the route to Syria and the pattern of behaviour is becoming increasingly familiar to analysts now tracking the gap between stated AIS voyages and the clandestine network of trades that supports sanctioned oil delivery.

The US Treasury’s Office of Foreign Assets Control has issued repeated advisory notes to shipping companies flagging behaviour to be aware of. In addition to the ship-to-ship transfers, vessel name changes and deliberate disabling of AIS systems, they have tracked numerous examples of falsified cargo and vessel documents.

And this is not a pattern limited to the Iran-Syria trade route. As all eyes were on Adrian Darya 1 on Friday, the US Treasury issued another advisory, this time focused on North Korea.

The Treasury Department said in a statement on Friday that North Korea has continued to use ship-to-ship transfers at sea to evade UN restrictions on its oil imports. The Treasury also alleged that North Korea has received deliveries of refined petroleum directly from ships flagged under other countries, and said those countries had not reported the deliveries to the UN. 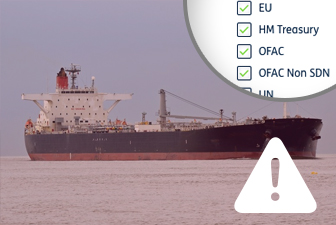 In January two Tanzanian-flagged liquefied petroleum gas carriers caught fire in the Kerch Strait during a ship-to-ship transfer operation, but the subsequent investigation revealed those vessels to be part of regular trades that mysteriously disappeared off AIS having passed Northern Cyprus headed towards the Syrian coast.

The list of such examples goes on and on.

It is now clear that scrutiny from multiple government agencies globally is increasing, but anecdotal evidence from security analysts and industry experts suggests that risk mitigation measures from shipping companies is not keeping pace with the enhanced scrutiny and technological advances that allow contraventions to be exposed.

For the legitimate end of shipping looking on as the Adrian Darya 1 saga plays out, the question is clear. How robust does a company have to be in its due diligence to categorically prove no links to third parties in risk of breaching sanctions?

Lloyd’s List is hosting a transparency forum on September 9 in London with speakers from the legal, insurance, technology and supply chain side where we will answer such questions and many more besides.

You can sign up to attend to the Lloyd’s List Transparency in Shipping Forum here. Attendance is free but space is limited so please register in advance to ensure you get a space.