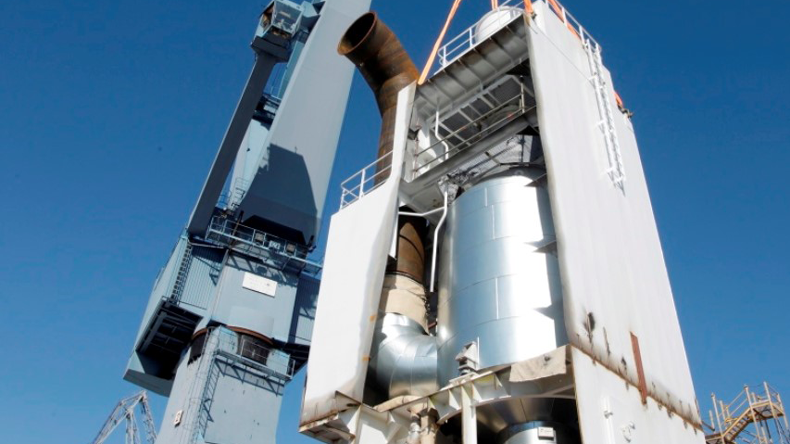 
Scrubber pipework is having to be replaced less than six months after installation due to corrosion problems that experts have told Lloyd’s List is almost impossible to predict and not widely understood by either shipowners or installation teams.

The UK Ship Register has launched a bold new strategy to become the best performing international flag in the world, focused on quality metrics and a long-term vision committed to customer service.

The Lloyd’s List Podcast: LISW Day 4 — How to change the shipping industry. We reflect on the major themes of the week’s debate, including: political backing for shipping, financing the fourth industrial revolution and the benefit of robust debate, along with a little hirsute finance leadership. Joining Lloyd’s List Editor Richard Meade from the LISW conference are Harry Theochari, global head of transport at law firm Norton Rose Fulbright and chair of Maritime UK, and Michael Parker, chairman of Citi’s shipping and logistics business.

A lack of preparedness for a no-deal Brexit and the potential implications have been laid out by the government with the release of the Operation Yellowhammer documents. But for the UK’s regional ports and shortsea operators, there could be a silver lining.


The International Union of Marine Insurance convenes in Toronto on Sunday for its annual conference, and while times are still tough, some even see tentative grounds for optimism this year.

Shipping’s digital pioneers will reap the rewards while laggards could pay the ultimate price. While for freight forwarders its bad news as technology increasingly cuts out the need for the middleman, says a leading futurist.

The US is being far too draconian in the way it imposes sanctions on Iran, writes Michael Grey. Seafarers of any rank are unlikely to know or even be able to track down the precise details of for whom they are working. For the US to put marine workers’ names on a blacklist — even in the absence of fault or criminal intent — is misguided and unjust.


Jakarta’s ban on nickel ore exports will have a negative impact on dry bulk shipping markets in the medium and long term, especially for the supramax and handysize sector, although its short-term effect could be positive.

Shipping’s path to decarbonisation has been discussed at length at London International Shipping Week, but for one of the industry’s most forthright thinkers, the journey starts with liquefied natural gas.

The Baltic Exchange has launched a new index to track the cost of operating vessels.

Shell’s vice-president of shipping and maritime Grahaeme Henderson has a vision for a zero-incident future for the sector. He also championed seafarers’ mental health and wellbeing at a London International Shipping Week event.

The pressure is building for negligent shipowners as Australian authorities moved to detain a second vessel in a week at a Queensland port, after crew members reported being owed more than $100,000 in unpaid wages.

US Coast Guard officials allowed two ships to depart Georgia’s port of Brunswick in an effort to obtain information useful to their work on the capsized ro-ro vessel, the 20,995 dwt Golden Ray.

The International Chamber of Shipping has appointed Hill Dickinson’s counsel and legal director at its Hong Kong marine team as the principal representative of the ICS (China) Liaison Office.