Legal and insurance experts agree that the volume and the enforcement of sanctions that affect shipping has escalated over the past few years. That has put a newfound pressure on the sector and the consequences of falling foul of sanctions can be irreversible. Can technology and internal compliance regimes help prevent inadvertent violations

Uncertainty over origin of cargo and ownership of business remains, despite support from third party operators

SANCTIONS monitoring can be “extremely challenging” for companies in the shipping industry, but the technology available that makes operations more transparent and proactive measures can minimise potential damage, experts are warning.

North P&I Club director Mark Church told Lloyd’s List that the increase in the number of sanctions and the marked escalation in enforcement primarily targeting the shipping sector over the past few years has increased the workload for P&I clubs, financial institutions and club members who must ensure they are not inadvertently breaching sanctions.

Arguably the most known and feared sanctions body is the US Treasury Department’s Office of Foreign Assets Control, responsible for enforcing sanctions, particularly as sanctions against Iran and Venezuela have ramped up.

“Today, there is more sanctions enforcement. And more sanctions. Starting with the Obama administration, the type of sanctions and complexity of sanctions by the US exponentially increased,” said a senior US-based lawyer knowledgeable in US sanctions on the shipping industry.

The lawyer admitted that one of the things that characterises Ofac regulations is that they are opaque as far as definitions are concerned.

But the way that warnings are handed out is slightly more nuanced than simple definitions. The US Treasury Department is good at putting out information and facts it expects industry to take into account.

“Industry is definitely expected to be aware of all facts that government and [non-governmental organisations] have published about actors in the industry,” they said.

The lawyer stressed that despite the challenges, inadvertent sanctions violations would not get a company off the hook.

But the greatest challenge, Mr Church argued, is monitoring activity to understand whether some kind of sanctioned cargo is being moved for example.

“The role of the P&I club traditionally has not been to police what our members are doing. We are not an enforcement agency. We are insurers,” he said.

P&I will advise members about how to best do ship-to-ship transfers, which are often used to move sanctioned cargo, and advises them to look at irregularities in Automated Identification System signals, which can indicate an attempt to conceal some kind of activity.

But despite the best due diligence efforts, companies may still fall foul of sanctions.

Lloyd’s List recently revealed that European, UK and US P&I clubs were offering cover to vessels that were moving Iranian cargo, in violation of US sanctions.

Mr Church explained that North has a compliance committee dedicated to ensuring the group is compliant with all sanctions and the kind of training employees should have and the measures the group should take.

He admitted that this is a costly endeavour but warned that a sanctions violation and the potential inability to trade in dollars and lose access to financing as a result would be disastrous.

“That is why everyone is aware that it is resource heavy, but it is important that there are resources there, as it is one of the few risks that is existential in the sense that if we get it wrong the impact would be catastrophic,” he said.

PB Tankers, an Italian shipping company that controlled seven vessels, went bankrupt earlier this year when Ofac sanctioned six of its vessels for violating US sanctions against Venezuela and Cuba.

The US-based lawyer admitted that under today’s circumstances in the shipping industry, where the true ownership or interests behind a company are often far from clear, companies can never be fully certain that they are not dealing with sanctioned cargo or even businesses.

“What protects companies in the shipping industry from the fact that you may never get down to the actual source point of ownership, is their compliance regime,” they said.

This includes the measures in place to ensure compliance, how those are carried out and developed within the company’s policy.

“In the United States, if you get it wrong, no matter how much you tried, there is a very strong chance you will have to pay some money. But it would be far less than if you did not try,” they said.

They further argued that the availability of tools to access and analyse data has upped expectations that companies will be able to meet their legal obligations with regard to sanctions.

Mr Church does not believe this increased scrutiny will usher in a change in the opaque levels of ownership and structures of different firms.

What is changing however, is that vessels can be tracked a lot more easily using satellite technology, making illicit behaviour a lot more easy to detect, from the government, press and other stakeholders.

Five years ago, he argued, some owners perhaps may have thought they could get away with it.

“The real change is that if shipowners are not sure about the legality of what they are doing, somebody will be sure because someone is looking,” he said. 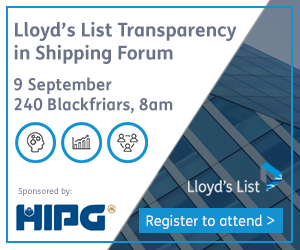 Interested in hearing more about increased transparency in the shipping sector and its implications for the industry? Lloyd’s List is hosting a transparency forum on September 9 in London with speakers from the legal, insurance, technology and supply chain side.

Tariffs on US crude imports will shake up VLCC market