Several P&I clubs say cover for any tanker found to be involved in sanctions-busting activity will be automatically invalidated, although they decline to comment on individual cases

MARINE insurers in Europe, the US and UK are providing cover for a group of 21 tankers and gas carriers tracked shipping Iranian cargoes to China, Syria, Singapore and other destinations in past months, in breach of unilateral US sanctions.

There is no suggestion the protection and indemnity clubs have engaged in any illegal activity. Iran’s growing subterfuge fleet is disguising the cargo origin and destination, as well as the ultimate owners of tankers, raising alarm bells as the US Treasury and Department of Justice further scrutinises Iranian energy commodities flows.

The 21 vessels from the International Group of P&I Clubs include eight very large crude carriers, four liquefied petroleum gas carriers, as well as a number of aframax and suezmax tankers, mostly flagged with Panama.

They form part of a fleet of 91 tankers tracked using Lloyd’s List Intelligence data that have engaged in evasive patterns of behaviour consistent with under-the-radar shipments or storage of Iranian crude or gas. These include 48 National Iranian Tanker Co-owned tankers already sanctioned by the US Treasury, as well as Grace 1, the VLCC detained in Gibraltar for six weeks for violating EU sanctions on Syria. NITC vessels are thought to be insured with Iran’s own P&I insurer, Kish.

The US Treasury, along with banks and marine insurers are among those closely monitoring these ships, London-based maritime lawyer Daniel Martin, a partner with HFW, told Lloyd’s List. Clubs and other insurers are very aware of the issue and regularly seek advice about voyages or vessels. He was speaking generally about the issue, not specifically about any vessels or clubs named by Lloyd’s List.

“It’s relatively easy to identify vessels that are engaged in calls to sanctioned countries but for the moment there has been less of a focus on insurers,” Mr Martin said. “But I think that this will come.”

The language of the Office of Foreign Assets Control, which administers and monitors economic and trade sanctions “is broad enough to put pressure on the industry” he added.

“Is there a need for more vigilance — the answer is yes. And what we are increasingly seeing is the use of vessel-tracking as a way to highlight high risk and also focus on other risk factors such as AIS transponders being turned off.” 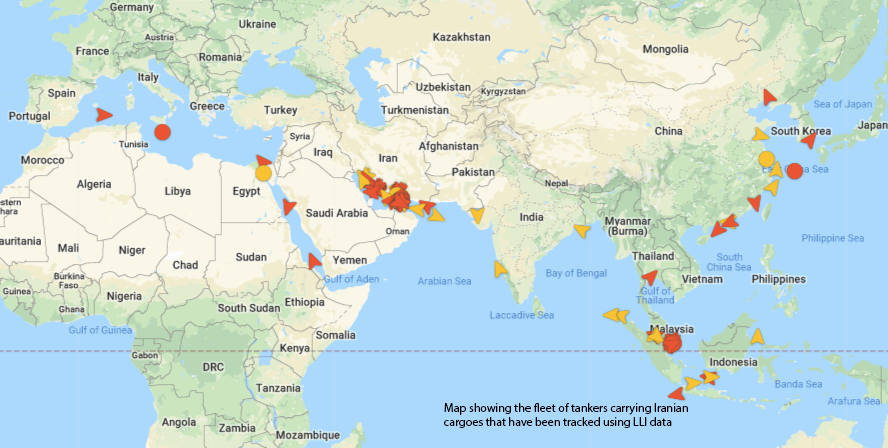 Reimposed US sanctions on Iran’s shipping and petrochemical industry came into effect last November and were stepped up in May as part of the Trump administration’s “maximum pressure” policy to cut crude exports to zero.

That has crippled Iranian shipments, which were more than 2m barrels per day a little over 18 months ago, and now seen at ‘official’ levels of just 300,000 bpd. Exports are largely under-the-radar, with destinations including China or Syria via circuitous routes involving a number of ship-to-ship transfers in waters off Singapore, Fujairah and Malta, vessel-tracking data shows. At least one cargo has been tracked to Indonesia.

Several P&I clubs with vessels entered emphasised to Lloyd’s List that the cover for any tanker involved in sanctions-busting activity would be automatically invalidated, although they declined to comment on individual cases.

One insurer said additional checks were done on a vessel that Lloyd’s List identified as loading Iranian crude as recently this month and tracked to Fujairah for STS transfers. This did not indicate it had lifted any cargoes after “rigorous screen protocols”, the chief executive said.

Lloyd’s List then provided geospatial analysis and patterns of behaviour showing that the tanker had been in the vicinity of a National Iranian Oil Co floating production tanker in early August and then disabled its AIS for three days before departing fully laden. “We will certainly be making further investigations of our own,” was the response.

The last two tankers changed ownership as recently as June and July. All have opaque ownership structures linked to other sanctions-busting ships. West of England told Lloyd’s List it was investigating and had no further comment.

“Trading to Iran is not of itself unlawful as a matter of either EU or US law,” said Mike Salthouse, chair of the International Group sanctions committee, in an emailed response to questions. “Such trades are also subject to the differing legal frameworks of the either the EU and the US towards Iran.”

Mr Salthouse is also the deputy global director of claims for the North of England P&I Association.

Marine insurers have not followed the path taken by flag registries, which have cancelled vessels once publicly identified as shipping Iranian crude. St Kitts-Nevis, Liberia and Panama have taken this action over the past six weeks.

The most recent incident involved the 1995-built aframax Bonita Queen, flagged with St Kitts-Nevis. The flag was removed this week. The vessel’s shipmanager was the same as Grace 1, Singapore-based Iships Management. The ship’s insurers were unknown.

Lawyers with whom Lloyd’s List spoke reminded the shipping community that Ofac has ‘form’ when targeting marine insurers. Enforcement action was taken against the American Club back in 2013 after it provided cover for ships linked to Sudan, Iran and Cuba.

A spokesman for Oslo-based Skuld, which had three of the 21 vessels tracked entered, said rigorous measures were in place to detect sanctions breaches.

“In accordance with our internal procedures [we] have been in a dialogue with [the] members but have no comment beyond that while our investigations are ongoing; communication with all of our members is confidential,” he said in an emailed response to questions.

Once the Iranian-controlled tanker Grace 1/Adrian Darya 1 departed Gibraltar on August 18, ending a six-week detention, US Secretary of State Mike Pompeo lobbied European countries not to let the vessel call in its waters, nor offer support or supplies. Doing so would be “facilitating terrorism” he said.

Such provocation signals the Iran-US conflict will continue to play out in international tanker markets, and this will intensify scrutiny on all marine service providers. Geopolitics is already shaping decisions about where tankers will call and which flag they will fly. This may extend to who can insure them.