All cities, maritime-focused or otherwise, will undergo times of stress. A better way to assess their contribution to the industry’s growth would be to strengthen their connections, as clusters have done

Hong Kong is in the throes of political turmoil, however most maritime hubs have concerns. One way to mitigate disruption is to think of a maritime city as a node in a connected network: part of a cluster 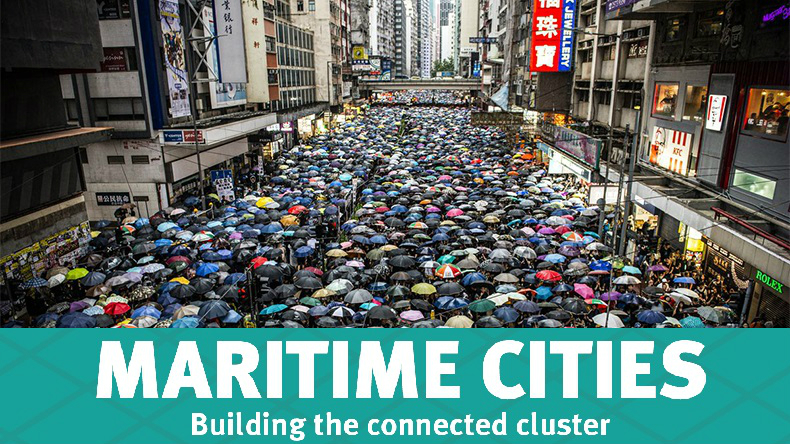 Source: Getty Maritime clusters have much more to offer than geographically defined cities such as Hong Kong, which experienced thousands of anti-government protesters taking to the streets on August 18, 2019 at it witnessed the sort of upheaval historically associated with such cities.

AN estimated 23% of Hong Kong’s population was on the streets this week protesting against the government. It has not been pretty, but unrest is rarely pretty. Some 17.4m voters placed their cross in the box marked ‘Leave’ for the UK’s referendum to withdraw from the European Union in 2016. It has not been pretty, but disruption is rarely pretty. Almost 40% of Greek voters backed a Harvard-educated former banker last month, thereby ejecting a prime minister who was elected to represent the people against the elite. The social experiment was hardly pretty.

In Dubai, the manoeuvring against Iran and Qatar has been discouraging for outside investment; meanwhile the container line set up to bring three Japanese carriers together based their head office not in Tokyo but in Singapore; and in Singapore itself, the prime minister is warning that the ongoing trade dispute between the United States and China will drag down Singapore’s economy.

All maritime hub cities go through periods of political unrest, realignment, and economic disruption Some just fall out of favour. According to the United Nations, India will overtake China to become the world’s most populous country in 2027; Mumbai is India’s maritime beating heart. However, Mumbai’s congestion and bureaucracy keep its ranking low in popularity tables. Sydney, Durban, St Petersburg, and Stockholm are all too distant from the main trade lanes, or predominantly serve local markets.

It’s likely that Singapore will always be the city to beat for political stability, targeted growth, transport connectivity, and highly skilled labour. But Singapore has acknowledged it faces a real dilemma: its population is ageing. Young people are leaving it late to have children, discouraged by digital disruption, global financial uncertainty, and climate change. However, the influx of senior managers from all over the world wishing to run their Asia Pacific operations from Raffles Place or Fusionopolis will ensure Singapore rides high. Whether the government steps in to safeguard its own population against the multinational elite has yet to be tested.

The real question is whether maritime cities matter in the way they once did. Oslo ranks seventh in the Menon listing of maritime cities, however when combined with Copenhagen, Bergen, Stockholm, and Helsinki, “Greater Oslo” is a world-class hub. Similarly, Vancouver doesn’t make the top 15 in Menon, but a west coast linear hub linking Prince Rupert to Panama City via Seattle, Oakland, Los Angeles, and Long Beach has technology, infrastructure, and talent in abundance.

Maritime clusters have much more to offer than geographically defined cities. The key determinant should be connections — air, rail, road, as well as sea — rather than proximity. To list Rotterdam and Antwerp separately misses the point; they are nodes in a Northwest Europe network of maritime skills. And that network continues to function while one of the nodes is undergoing a brief period of ugly disruption.

One too many variables in maritime sustainability reporting