Oil traders and charterers are said to be reassessing the short and medium-term use of tonnage connected with the Isle of Man, UK, Cayman Islands, Gibraltar or British Virgin Islands group of British registries as the diplomatic crisis with Iran escalates

OWNERS and operators of UK-flagged ships are understood to be considering a change in flag registration amid heightened security and safety risks.

Eight trading vessels remain stranded in the Middle East Gulf as others divert from Strait of Hormuz transits. As many as 350 tankers and 65 gas carriers could be sidelined from the world’s biggest energy commodities region

Oil traders and charterers are said to be reassessing the short and medium-term use of tonnage connected with the Isle of Man, UK, Cayman Islands, Gibraltar or British Virgin Islands group of British registries as the diplomatic crisis with Iran escalates.

The UK government today raised the security threat level for all UK-flagged vessels to the highest level for the entire strait.

Any flag switching will further imperil the UK ship registry, which has already lost 30% of its tonnage so far in 2019 because of uncertainty over Brexit.

Two chemical tankers and a liquefied petroleum gas carrier are at anchor off Jubail, Saudi Arabia, while a further three containerships and a general cargo vessel are off the western coast off the United Arab Emirates.

A naval auxiliary tanker is also within the area and, like the seven other vessels, is unable to transit the Strait of Hormuz, where the Islamic Revolutionary Guard Corps seized UK-flagged product tanker Stena Impero.

The UK Chamber of Shipping, which represents the interests of owners of UK-flagged tonnage, was locked in talks with the government on Monday as a diplomatic solution to the impasse was sought and details of the European-led maritime protection mission were teased out.

“We are working closely with Her Majesty’s government on restoring confidence and security among the shipping community so that trade can continue to flow freely through the region over the coming days,” said the chamber’s chief executive Bob Sanguinetti.

The July 19 seizure of the Swedish-owned UK-flagged Stena Impero as it transited through international waters in the Strait of Hormuz on its way to Jubail followed an unsuccessful interdiction attempt of the Isle of Man-flagged suezmax British Heritage days earlier.

Some owners and operators of the 4,569 ships registered with the UK group of five registries have indicated that switching flags is under consideration, shipping sources told Lloyd’s List. 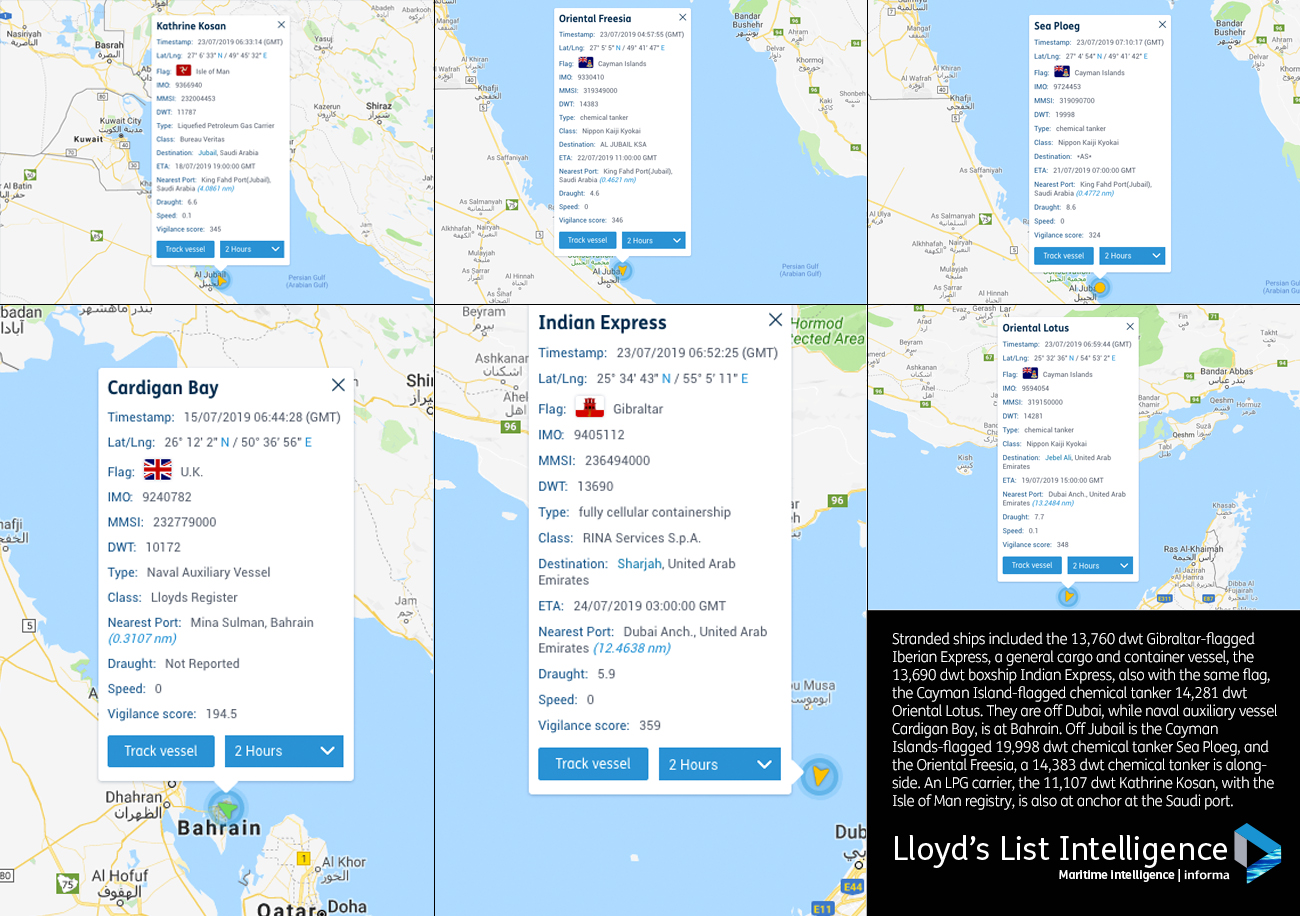 Some 16.8m barrels per day of crude sails through the Strait of Hormuz, according to Lloyd’s List Intelligence data, with refined products including diesel, jet fuel, gasoil and gasoline adding a further 4m bpd to the tally. About a quarter of the world’s liquefied petroleum gas and liquefied natural gas also is shipped through the strait.

One maritime risk consultancy is already advising its clients to switch flags.

“In the interests of business continuity, charterers and technical managers are advised to consider the chartering of non-UK connected vessels in the medium to long term,” said Chichester, UK-based Dryad Global in a note.

“Chinese-flagged vessels currently represent the lowest risk of interruption within the Strait of Hormuz, and are highly unlikely to experience any form of disruption by way of detention. All UK vessel owners are advised to consider the relocation of all UK interest vessels from the Middle East Gulf when safe to do so, and to remain mindful of the limitations of naval protection.”

There are 65 liquefied natural gas carriers and LPG carriers with UK registries, as well as a further 351 tankers above 10,000 dwt, Lloyd’s List Intelligence data shows. BP Shipping is the third-party operator for 29 UK-flagged ships out of its fleet of 56, the data shows, while Trafigura operates two Isle of Man-flagged tankers and charters more for spot voyages.

Shipowners have already been switching from the UK Shipping register amid rising uncertainty concerning Brexit.

French container line CMA CGM was the highest-profile exit when earlier this year it reflagged some 30 vessels to Malta. Owners of significant tonnage trading in the Persian Gulf include the BW Group, with 19 LPG carriers, as well as Japan’s MOL Lines, Nordic American Tankers, NYK and Stolt Tankers, Greece Restis Group and Stolt-Nielsen Rederi.

Stranded ships included the 13,760 dwt Gibraltar-flagged Iberian Express, a general cargo and container vessel, the 13,690 dwt boxship Indian Express, also with the same flag, the Cayman Island-flagged chemical tanker 14,281 dwt Oriental Lotus. They are off Dubai, while naval auxiliary vessel Cardigan Bay, is at Bahrain. Off Jubail is the Cayman Islands-flagged 19,998 dwt chemical tanker Sea Ploeg, and the Oriental Freesia, a 14,383 dwt chemical tanker is alongside. An LPG carrier, the 11,107 dwt Kathrine Kosan, with the Isle of Man registry, is also at anchor at the Saudi port.