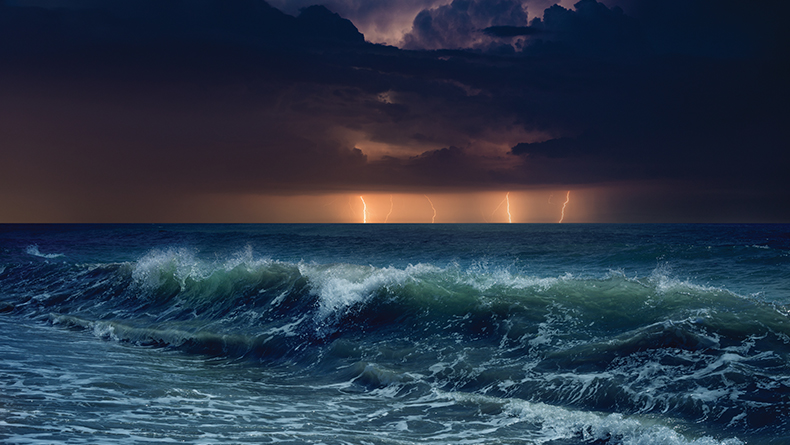 Source: IgorZh/Shutterstock.com Storm clouds on the horizon: full-year forecasts have been downgraded as uncertainty mounts.

CONTAINER port throughput growth is expected to continue its softening trend in 2019, as the industry comes to grips with numerous headwinds.

Whether trade wars and other forms of geopolitical tension, regionalisation or environmental concerns, the combination of these factors has prompted analysts to downgrade full-year forecasts as uncertainty mounts.

London-based global shipping consultancy Drewry published its latest ‘Container Forecaster’ report at the start of July, which stated that for these reasons, it had lowered its expectation for global port throughput in 2019 from its previous level of 3.9% to a more conservative 3%.

Nevertheless, Simon Heaney, senior manager for container research at Drewry and editor of the Container Forecaster, said there is a confidence that world trade will rebound in 2020. However, he warned how this will hinge on developments outside of container shipping’s control.

Beyond Brexit and sanctions, whether on Russia or Iran, there is the potential for the escalation of tension in the Middle East, on the Korean Peninsula and volatile places elsewhere, which all adds a layer of uncertainty over the short- to mid-term prospects for the container market.

The further spreading of protectionist policies, though, will be a grave concern that could stunt growth, particularly if the US aims its tariff target at other trading partners, explained Mr Heaney.

“However, there could be some upside for trade if more manufacturing production is relocated outside of China,” he said.

“The Asian export powerhouse has progressively reduced its requirement for foreign inputs, choking off demand for intermediate goods, so any shift to less self-reliant economies should give trade a bit of a kick-start.”

Although the US-Sino trade war has taken a pause for the time being, the impact in 2019 has been telling.

Figures published by the US Census Bureau showed that US imports from China through the first five months of the year had slumped 12%, representing the biggest decline since the financial crisis a decade ago.

Interestingly, it would appear that other Asian countries are picking up the slack.

In Long Beach, for example, trade with China up until May was down nearly 26% on last year, while trade with Vietnam, on the other hand, surged by more than 34%.

The pattern was repeated at the largest port in the US, Los Angeles, where Chinese trade fell 11%, as trade with its four largest Asian trade partners, Japan, Vietnam, South Korea and Taiwan, all increased.

Whether alternative sourcing will address the shortfall of Chinese trade long term is uncertain. Not only could the US extend its trade feud beyond China, but there is the lingering and existential threat of trade regionalisation.

Protectionism could hasten this trend in the US and other countries with similar ideologies, but the regionalisation of trade is one being played out globally that poses a major issue for ports handling international — and, indeed, intercontinental — trade.

There are already signs that manufacturers are moving closer to the point of consumption, as the economics behind cheap labour sourcing dwindles. Technology, too, will accelerate trade regionalisation, with 3D printing and automation playing their part.

A further external threat to longhaul seaborne trade is the “growing momentum behind a low-carbon, environment-first campaign that has the potential to fundamentally change global consumption habits”, said Mr Heaney.

Speaking at a Lloyd’s List forum in June, one prominent shipowner even went as far as stating that the carbon footprint will be included on the packaging of certain products as it becomes an increasing factor behind consumers’ purchasing decisions.

Given container shipping’s environmental record, this can only spell bad news.

Looking beyond 2020, the consensus is that moderate growth will become the standard for the container port sector, as the market gradually reaches maturity.

As port investors and terminal operators alike face up to this new norm, the appetite for expansion has waned and greenfield projects have taken a back seat.

The focus for those with ambitions to grow has switched to acquisition — which has seen a number of smaller operators snapped up by the major players, such as Cosco’s high-profile takeover of Noatum Ports — but also on how best to utilise existing facilities.

This is easier said than done. A shrinking customer base, born as a consequence of incessant merger and acquisition activity among carriers — which has also led to just three liner alliances plying the principal trades — makes this feat increasingly problematic.

For carrier-affiliated terminals, the answer is to push through as much business as they can via their respective lines, where possible.

However, for standalone operators and independent ports, there are two options: join the club and either sell up or offer equity stakes to guarantee traffic; or create value for the customer to ensure services continue to call.

DP World, for example, made a smart move last year with its Unifeeder acquisition, in a bid to enhance its European proposition.

In 2018, there was also a distinct trend among operators looking to expand their landside offering to get closer to the cargo owner and enhance their presence in the supply chain.

Whether others will follow a similar path is unclear, but it is a sign of a change of tack away from the activities of a traditional port operator.

Amid an increasingly competitive port operator pool, others may also look to think outside the box to add to their value proposition.

Technology is another area that breeds opportunity, such as automation, blockchain or even hyperloop.

However, the biggest challenge in exploring the minefield of options will be finding what will work best for a particular operator or location — and whether this will bring in enough customers to justify the investment.

Although it has not reached the stage of ‘diversify or die’ just yet, standing still is not an option. Some stand to lose.