The tanker that Iran said it towed into the country’s waters after technical problems made no port calls over the past one year, had 27 days of dark activities and met 55 times with another vessel, trading patterns characteristic of clandestine ship-to-ship transfers

Iranian forces towed the tanker Riah into Iran's waters after receiving a request for help, Foreign Ministry spokesman Abbas Mousavi was cited by the semi-official ISNA news agency as saying 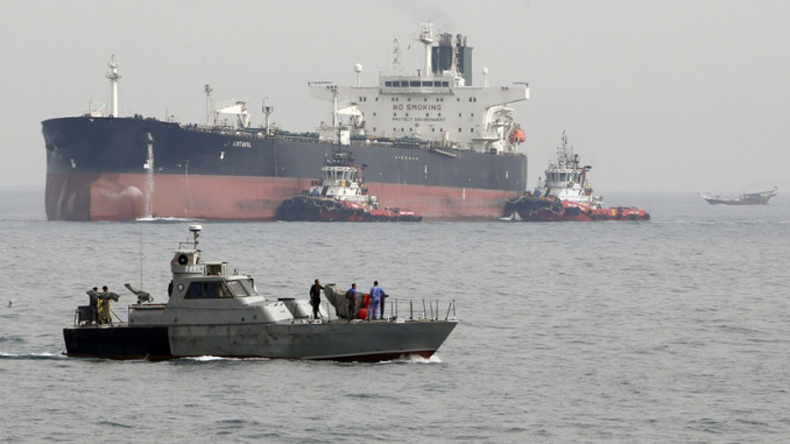 Speculation that the 1988-built Riah had been hijacked was stoked after reports the vessel diverted to Iran on July 14 and switched off its Automatic Identification System transponder.

THE “foreign oil tanker” that Iran said it towed into the country’s waters after technical problems had been involved in dark ship-to-ship transfer activities over the past year, data analysis shows.

The Panama-flagged Riah, a 1,899 dwt tanker, made no port calls over the past one year, had 27 days of dark activities and met 55 times with another vessel, trading patterns characteristic of clandestine ship-to-ship transfers, data analysis showed.

Speculation that the 1988-built vessel, worth about $650,000, had been hijacked was stoked after reports the vessel diverted to Iran on July 14 and switched off its Automatic Identification System transponder after passing through the Strait of Hormuz.

Analysis from Tel Aviv-based maritime risk intelligence provider Windward showed the vessel had been regularly shuttling between the Gulf of Oman and the United Arab Emirates for months, and frequently turned off its automatic identification system, which transmits its location.

The practice, known as ‘going dark’, is frequently used by tankers loaded with Iranian crude, condensate, fuel oil, liquefied petroleum gas and other refined products to avoid detection and evade US sanctions.

So too are ship-to-ship transfers, which alongside going dark, obfuscate the origin, destination and loading of cargoes.

“It was receiving fuel from an unknown source offshore Fujairah via dark ship-to-ship (STS) transfers, and then transhipped it to other tankers which usually carried it to Somalia and Yemen,” Windward said in a note.

Iranian forces approached the vessel and towed it to its waters after receiving its request for help in Gulf waters, Foreign Ministry spokesman Abbas Mousavi was cited by the semi-official ISNA news agency as saying. He added that further details would be announced later.

The vessel’s latest position was received on July 7 when it was nearing Iran, according to Lloyd’s List Intelligence.

The AIS transponder, which should be on at all times in line with international safety and security regulations, has been switched off since.

UAE-based Prime Tankers LLC, which is listed as the beneficial owner and commercial operator of the ship, told Lloyd’s List that it had sold the ship to a company called Mouj Al Bahar, also based in the UAE, in 2018. A UAE official earlier said the ship was “neither UAE owned nor operated”. and “did not emit a distress call”.

Mouj Al Bahar could not be immediately reached for comment.

According to Panamanian registration documents Riah is registered to an entity called Riah Shipping & Trading Incorporated.

While few details of that company are available, the Panama registry reveals that company is also the owner of a similar tanker, the 1988-built, 1,900 dwt tanker Hayla. That vessel has not signalled its position since April 4, and has been noted sailing in the same area and vicinity as the sister vessel.

Adding to the complex nature of the ownership, Riah Shipping & Trading is registered as a corporation in the Marshall Islands and in Dubai.

While the Panama Registry confirmed the vessel’s registration, a spokesperson in Panama City added the tanker will be referred to its legal department for further investigation, given the unusual activity.

Against the backdrop of the Riah diversion are inflamed tensions in the Middle East Gulf between Iran, the US and its Middle Eastern allies over the crippling sanctions on Iran’s petrochemical and shipping sector.

Iranian clerical, government and military leaders have also threatened retaliatory action against British ships after the July 4 seizure of an Iranian-controlled very large crude carrier in the waters off Gibraltar.

Grace 1 was detained not because it was carrying 2m barrels of Iranian crude, but because it was destined for a Syrian refinery in breach of European Union sanctions, Gibraltar’s chief minister Fabian Picardo said.

Mr Picardo was due to hold talks with UK prime minister Teresa May in which the Grace 1 seizure was said to be on the agenda. The UK has said the vessel can be released if Iran can guarantee it will not discharge at Syria

Britain is sending a third warship to the region amid repeated threats made by Iran. The US is reported to be trying to create a coalition to mount an international maritime security operation across the Gulf.

Britain to send third warship to protect shipping in Gulf

US ‘shooting from hip’ on Iran sanctions, says IG head