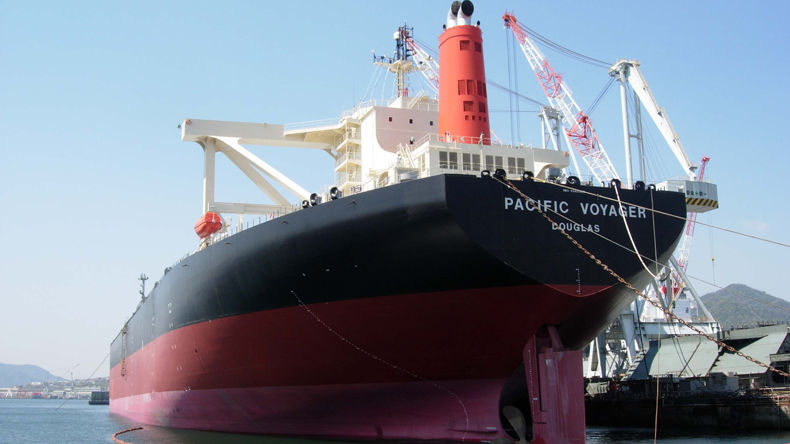 Pacific Voyager was accompanied by at least two military vessels for part of its journey through the Strait of Hormuz.

THE safety and security of British-flagged ships sailing in the Middle East Gulf is uncertain after senior Iranian figures repeated threatened retaliatory action for the Grace 1 seizure and a British warship escorted at least one UK tanker through the Strait of Hormuz.

The Isle of Man-flagged Pacific Voyager was accompanied by at least two military vessels for part of its journey through the Strait of Hormuz after sailing from Ras Tanura, Saudi Arabia on July 7.

The very large crude carrier had loaded a 2m barrel cargo there, based on vessel tracking data.

The Ministry of Defence declined to confirm the escort.

Another Isle of Man-flagged tanker, British Heritage, diverted and failed to load its 140,000 tonne cargo of crude at Basrah, Iraq, as planned on July 4 – the day Grace 1 was intercepted off Gibraltar. 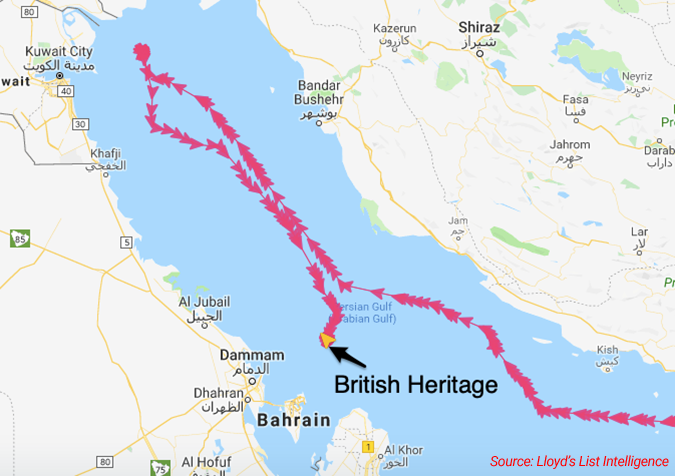 Instead, the vessel headed to Saudi waters where it has remained for the past 48 hours. Shell had chartered the ship. Operators BP Shipping did not respond to a request for comment.

The escorts and diversions are seen amid hardening Iranian rhetoric following the interception and impounding of an Iranian-controlled very large crude carrier Grace 1.

Iran’s foreign minister, the chief of staff for Iran’s armed forces, and a senior cleric have all publicly condemned the action and demanded the vessel’s release.

The chief of staff for Iran’s armed forces has said a British ship would be taken in retaliation.

Twenty British-flagged vessels of 15,000 dwt or above have sailed through the Strait of Hormuz into Middle East Gulf waters since July 2, according to Lloyd’s List Intelligence data.

This includes a naval auxiliary tanker Wave Ruler, which arrived early on July 8, as well as commercially-owned liquefied petroleum gas carriers, liquefied natural gas carriers, product tankers, containerships and crude carriers, data show. No other vessels appeared to be bound for Basra, which is closest to the Iranian border 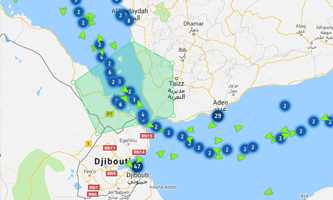 The UK Chamber of Shipping said it was working with the UK government and relevant departments in light of the threats made by Iran.

Maritime security for Iranian waters had already been raised by the Department for Transport to the highest level (three), signifying exceptional risk, said Gavin Simmonds, policy director at the Chamber.

“It is highly unusual for level three to be declared so we are assessing the implications of level three being set to the adjoining waters, and what this means in terms of increased threats,” he told Lloyd’s List.

“Our interest is not just in UK-flagged ships, this is very much an international problem though we recognise the exchange of words at the moment with Iran is directed at UK interests and specifically that means UK flags and shipping.”

Iranian exports of crude have been paralysed since May, when unilateral US sanctions on its oil and petrochemical industry began to bite. The administration did not renew 180-day waivers granted to eight countries to import limited volumes of Iranian crude on May 1, forcing Iran to sell its sanctioned crude at a steep discount, with China and Syria the only buyers.

The DfT declined to comment on what advice was being provided to UK-flagged vessels, nor whether security advice had been upgraded in recent days.

“The Department for Transport, as competent authority, regularly provides security advice to UK and Red Ensign Group Shipping on how they should operate in areas of high risk,” the department said in an emailed statement to Lloyd’s List.

As well as the UK flag, this covers ships with the Isle of Man, Gibraltar, British Virgin Islands and Cayman Islands.

Inquiries to the Combined Group of War Risks Clubs about the implications for UK flagged vessels were not answered. Additional premiums have risen 10-fold for vessels entering the Strait of Hormuz and other areas in the Middle East Gulf after listed areas were expanded after four tankers were attacked last May off Fujairah.

Instex — a short-term fix for a long-term problem?