Not a subscriber?
Find out about tailored subscription packages:
T: +44 (0) 20 3377 3792
E: subscription.enquiry@lloydslist.com
Sign In
New to Lloyd's List? Register for our free email digests:
Register
Tags: 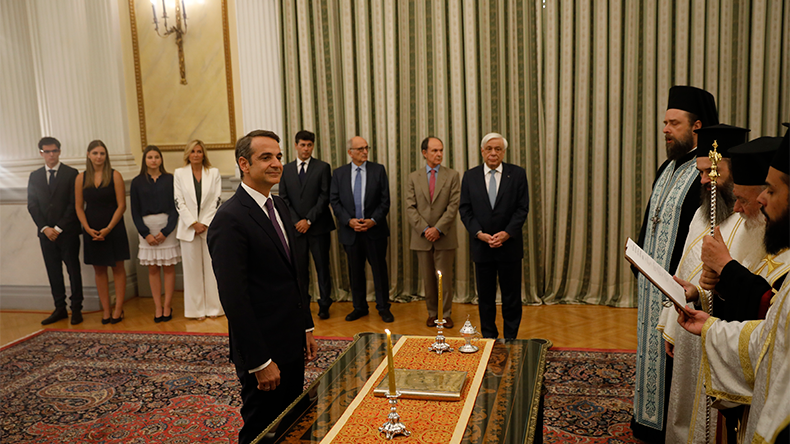 KYRIAKOS Mitsotakis was sworn in as Greece’s new prime minister on Monday after his New Democracy party swept to power on pledges of changing the country’s entrenched government culture, boosting investment and jobs, and cutting taxes.

Fulfilling many of those promises will present stern challenges in a country trying to throw off a decade of austerity and recover lost capacity and jobs, while still coping with a fiscally fragile backdrop.

Although a new administration will always contain an element of the unknown, the country’s powerful shipping industry will feel very few jitters compared with four-and-a-half years ago when Alexis Tsipras first became prime minister.

His left-wing Syriza party’s sabre-rattling towards the industry, coupled with a then-ongoing Brussels probe into whether the country’s tax system for shipping complied with EU state aid guidelines, were enough to set nerves jangling throughout the shipping community. Scores of shipowners, albeit with a heavy heart, actively explored alternative locations.

But things settled down under Mr Tsipras. The erstwhile left-wing firebrand surprised many by adapting to the politics of austerity that he had lambasted in opposition. His pragmatic streak was also evident, far less controversially, in the government’s increasing understanding of the shipping industry’s centrality to Greece and its economy.

The Tsipras government ultimately proved amenable to a compromise deal with Greek shipowners that appears to have been sufficient for the European Commission to quietly drop its eight year-long investigation.

Key elements of the new tax deal for the industry include an acceptance by shipowners of a 10% dividend tax on repatriated profits, while a temporary austerity tax and double-tonnage taxes, which had been levied as a voluntary measure since 2013, have been phased out.

With the framework for Greece’s oceangoing shipping community appearing more settled than it has been for a while, few expect much friction between the incoming administration and shipowners.

With the overwhelming strength of Greek shipping facing outwards towards global tankers, dry bulk, container and gas trades, the industry usually seeks nothing more from an incoming government than to be left alone to go about its international business as usual.

Greece is one of the few countries in which the industry’s importance is reflected in a stand-alone shipping ministry. Over the years, it has been a concern within the sector that a change of administration should not herald any dilution of its status or lead to an ill-advised rupture between the political brief and the coast guard that provides it with technical and operational credibility.

The Union of Greek Shipowners has grown more proactive in recent times, though, and only recently its president, Theodore Veniamis, doubled down on industry calls for the government — whichever emerged from Sunday’s elections — to prioritise the seafaring profession.

The Greek-owned fleet continues to grow in capacity, unlike that of most European nations, and is facing an increasing shortage of officers unless the country’s maritime academies are expanded and equipped to churn out more qualified seafarers. According to the industry, it is also a winner for the economy at a time when unemployment is still at about 18%, even after more than 400,000 people left Greece to seek jobs abroad.

A look at Greece’s wider maritime sector, however, shows there is plenty for the incoming Mitsotakis administration to grapple with.

The new prime minister has already said that one of the very first moves of the new government would be smoothing the approval process for Cosco’s €600m ($673m) extended investment programme for the port of Piraeus, which under the previous administration was left up in the air due to local opposition to some of the plans.

According to Hellenic Chamber of Shipping president George Pateras, “robust” new legislation is required to shred red tape in the commercial yachting sector and enable Greek-flag yachts to compete on a level playing field with foreign flag yachts sailing the Aegean.

Action is also needed from the new government to enable the coastal ferry sector, now aging after nearly a decade of recession, to renew itself as well as meet the challenge of new environmental requirements.

“There are many issues still outstanding,” Mr Pateras told Lloyd’s List. “We need to have a very active ministry with people who have the knowledge to interface with the EU and the International Maritime Organization, to protect Greek shipping’s interests and ensure that the Greek ship can remain competitive.

“The end-goal of all of us is to have all Greek-owned vessels under the Greek flag and not make the same mistake as some other European nations and minimise the need for national crew to just a master.”

There is optimism within the maritime industries that Mr Mitsotakis will not be a prime minister that needs extensive briefing in order to grasp the importance of the sector to Greece.

“I think he understands shipping very well,” said George Xiradakis, president of the Piraeus branch of the Propeller Club and a candidate for New Democracy in this year’s European elections.

“He has spent a lot of time with people all across the maritime sector, not necessarily only with shipowners.

“There is a lot of potential for investment and jobs not only from the shipping companies, but also in short-sea, ports, logistics and even shipyards.