Container lines had another year to forget in 2018. Increasing uncertainty over fuel regulations and trade barriers added to a less-than stellar year 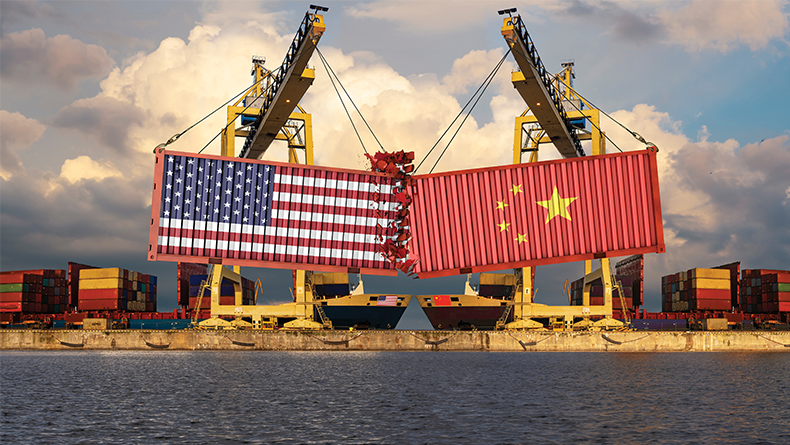 Source: Mike Mareen/Shutterstock.com Trade wars: rates were badly affected as the sabre-rattling over trade between China and the US started to get serious.

AFTER early hopes of a solid recovery, 2018 turned out to be something of a mixed bag for container lines.

The year started well, with year-end results from 2017 showing positive figures. However, rates began to stumble in the new year and the recovery — such as it was — began to splutter.

Two factors sat behind this. Fuel prices rose significantly during 2018, pushing up costs; then the sabre-rattling over trade between China and the US started to get serious.

The proposed introduction of a 25% tariff on $20bn worth of Chinese exports to the US — mostly containerised consumer goods — initially confused carriers. Sensing a slowdown, they pulled tonnage from the transpacific trade in an effort to stabilise rates.

However, what they failed to foresee was a massive surge from importers. Given the lead time between the announcement of new tariffs and their proposed implementation on January 1, beneficial cargo owners rushed to get stock in ahead of time.

The peak season, when it came, turned out to be stronger and longer than expected.

All three alliances had removed or merged loops on the transpacific ahead of the third quarter, citing increased bunker costs and lower demand, but within a month they were adding extra loaders.

The impact on spot rates was almost instantaneous. By the end of the second quarter, US west coast rates had slumped to $1,250 per feu, barely above the BCO contract levels.

As soon as the carriers announced service suspensions, spot rates began to climb. By the first week of September, they had surged to $2,350 per feu and continued to rise.

For ports on the US west coast, there was an import bonanza that threatened to overwhelm. Los Angeles port officials said frontloading by shippers created problems at certain of their terminals and TraPac was forced to warn Los Angeles area truck drivers of a shortage of trailer chassis.

In the US intermodal space, hauliers and warehouses were hard to come by, as retailers stocked up on pre-tariff goods while they could.

The January 1 deadline turned out to be a false start, as tariff impositions were delayed, only to be finally introduced in May.

However, the frontloading and congestion showed just how dramatic an effect trade policy can have on the container shipping sector — and that uncertainty is set to remain for some time to come.

Maersk Line has joined fellow European carrier Mediterranean Shipping Co in announcing an emergency bunker surcharge due to what it called “the unsustainable nature of the situation”.

The extent of the impact of the increasing price of bunker fuel was more than evident upon the release of carriers' first-quarter financials. Red ink was reported across the board.

Industry analysts SeaIntel estimate combined cashflow losses among the major liner operators in the first half of 2018 in the region of $580m, trending towards a $1.3bn cashflow loss for the full year.

Maersk highlighted how bunker prices in 2018 were “significantly higher” than expected and, at $440 per tonne in Europe, were at their highest level since 2014.

The impact of the upcoming introduction of low-sulphur rules on January 1, 2020 also began to be felt during 2018. Whether carriers choose to use low-sulphur fuel, scrubbers or liquefied natural gas, the cost of meeting the 0.5% sulphur emissions limitation will be high.

Carriers and their shipper and beneficial cargo owner customers have been arguing over who should pay for that cost.

The starting gun was fired by Maersk in September, when the world’s largest container line pointed out that the requirement to use 0.5% sulphur bunkers would increase its fuel bill by $2bn a year.

To compensate for this, it announced it would apply a new bunker recovery surcharge that would replace its standard bunker adjustment factor surcharge, with effect from January 2019.

Maersk was quickly followed by CMA CGM, MSC, Hapag-Lloyd and Ocean Network Express, all of whom have come up with variations on a theme; the message is that the customer must pay.

To date, carriers have been positive that customers will foot the bill, but the cost of IMO 2020 is not just in the price of fuel. For those opting for scrubbers, ships need to be taken out of service and new vessels chartered in to cover those being upgraded.

Poor schedule reliability continues to dog both carriers and their customers.

According to figures from SeaIntelligence, last year was the worst on record in terms of schedule reliability since it started collecting data eight years ago, with 75% of services offered by the top 15 carriers arriving more than a day later than their scheduled arrival time.

In an effort to make amends, carriers have been trying to reorder their networks to include fewer port calls and more direct port-to-port calls.

By December, the 2M Alliance of Maersk and Mediterranean Shipping Co followed other lines in announcing it would slow ships and reduce the number of port calls in order to improve schedule performance.

However, the lines laid the blame for delays largely at the feet of terminal operators.

“The problem is the huge congestion in the terminals,” MSC's head of Asia network Caroline Becquart told Lloyd’s List.

“One day of port closure can lead to three days of bringing the terminal back on track, especially in a port like Shanghai.”

“We can avoid weather issues, but on the land side, the utilisation of terminals and ports has increased considerably in the past six to seven years,” he said.

“When we get delays in ports due to weather, strikes or operating system problems, the knock-on impact is significant.”

A failure to improve turnaround times at some terminals could lead to very bad outcomes for box port operators.