The use of synthetic aperture radar technology means ships can be detected even if they turn off Automatic Identification System transponders. Satellites can see through clouds to detect vessels using microwave pulses 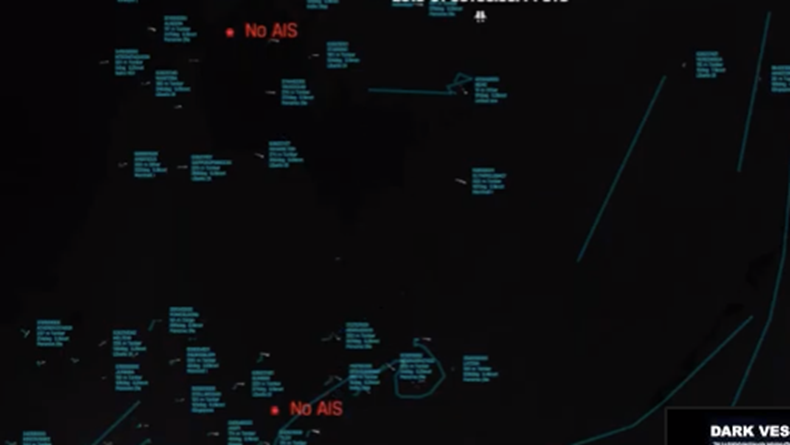 Source: Copyright: Spire Maritime/ICEYE Along with Spire Maritime, Iceye’s dark ship detection is developing the first, broad picture about the prevalence of vessels without AIS.

VESSELS failing to comply with international sanctions will not be able to avoid being tracked in real time as technology used to detect illegal fishing is fully adapted for commercial shipping.

Iran’s fleet of 36 very large crude carriers and eight suezmax tankers have finessed and expanded the so-called practice of ‘going dark’ by establishing complicated logistics chains to avoid detection and thus disguise the origin and destination of oil cargoes.

At the centre of this strategy is the practice of turning off Automatic Identification System (AIS) transponders which signal a vessel’s position and depth in the water, along with other identifying information.

A record 33 of the National Iranian Tanker Co’s VLCCs did not transmit signals via AIS data this month, data from London-based shipbroker Gibson showed. That compare with 12 VLCCs in May, and 22 in January.

During these so-called dark periods, NITC tankers have been observed sailing to Syrian ports to discharge cargoes of Iranian crude and conducting ship-to-ship transfers to other tankers to obfuscate cargoes and their origin from waters off Iran, the United Arab Emirates and Malaysia.

Similar practices are seen with North Korean, Syrian and lately Venezuelan cargoes, with shipowners and operators using copy-cat techniques to hide deliveries and transfers of sanctioned crude and other cargoes.

Shining light on these operations has been the use of synthetic aperture radar (SAR) technology. Satellites can see through clouds to detect vessels via microwave pulses to produce two-dimensional images with a resolution of two metres, according to Pekka Laurila, co-founder of Iceye, the leader in the commercial application of this technology.

The Finland-based company claims to have the world’s largest and fastest radar satellite constellation.

It currently has one satellite providing SAR images, and this year expanded its application from monitoring illegal fishing activity to tracking commercial vessels going dark.

Within two years, Iceye expects to have a further five satellites launched that will allow hour-by-hour images of vessels.

When married with AIS tracking, this can provide a complete overview of any voyage. Currently images are only available every 24 hours.

Grainy photos can identify dark tankers alongside those transmitting AIS signals in areas off Iran, Fujairah and elsewhere in the Middle East Gulf.

“There are a lot of lot of oil companies who are extremely interested in this,” Mr Laurila told Lloyd’s List. “Or there are companies who want to make sure that links to their operations are not breaking sanctions and that ship-to-ship transfers are not linked to (sanctioned) companies.”

The use of AIS technology is mandatory under SOLAS regulations unless the safety and security of the ship is compromised. Vessels transiting the Gulf of Aden and other piracy hotspots in the South China Sea often turn off their AIS for this reason. But the prevalence of what Iceye describes as “uncollaborative vessels” has risen sharply with the application of US sanctions on Iran and Venezuela.

Gard, the marine insurer, said in a client note last month that ‘going dark’ was a red flag. Breaches of the SOLAS convention heightened the risks of collision and could be grounds to deny P&I insurance coverage, it said.

“‘Going dark’ in areas of heightened surveillance is a red flag to authorities and legitimate reasons may need to be evidenced to dispel suspicion of intentional avoidance of sanctions compliance,” the Gard note said.

Iceye forecasts that within two years application of SAR will be widespread throughout commercial shipping and allow 24-hour tracking regardless of AIS signal.

Currently the nascent technology is expensive and limited. The company recently combined with AIS provider Spire Maritime to offer fixed-area monitoring over 10 weeks for 50,000 euros ($56,000).

The appetite by port states and flag registries to monitor dark vessels is varied and patchy.

The Liberian registry recently deflagged a Chinese-owned VLCC that was shipping sanctioned Iranian crude, loaded while its AIS was not transmitting.

However, port authorities in Iran and the UAE declined to fully answer Lloyd’s List questions about the practice.

It took Nader Pasandeh, Iran’s director of Maritime Affairs and International Maritime Organization representative, 12 days to respond to questions about the prevalence of Iranian-owned flagged ships going dark both off the coast of Iran and during international voyages.

“I am the manager of maritime affairs which is a fully operational directorate and I am not talking with any media,” Mr Pasandeh said in an email. “Please check our website and try to contact PMO general communication directorate.” The directorate did not respond.

The United Arab Emirates IMO representative Mohamed Al Kaabi said he was not authorised to discuss the matter.

Iceye technology has detected vessels at Fujairah anchorage not using their AIS and conducting ship-to-ship transfers involving Iranian crude as recently as January.

“My country works with the friendly and neighbour countries in that area,” said Essam Al Ammari in an email, without providing further detail.

Along with Spire Maritime, Iceye’s dark ship detection is developing the first, broad picture about the prevalence of vessels without AIS and hotspots where potential illegal activity is happening.

“The bad guys turn it off when it is convenient for them,” the companies said in a recent joint presentation to clients.

Eye in the sky to give shipping complete ocean visibility