The US is adamant that Iran is behind Thursday’s attacks, but as security sources assess the evidence the shipping industry has once again found itself caught in the middle of a geo-political conflict over which it has no control. 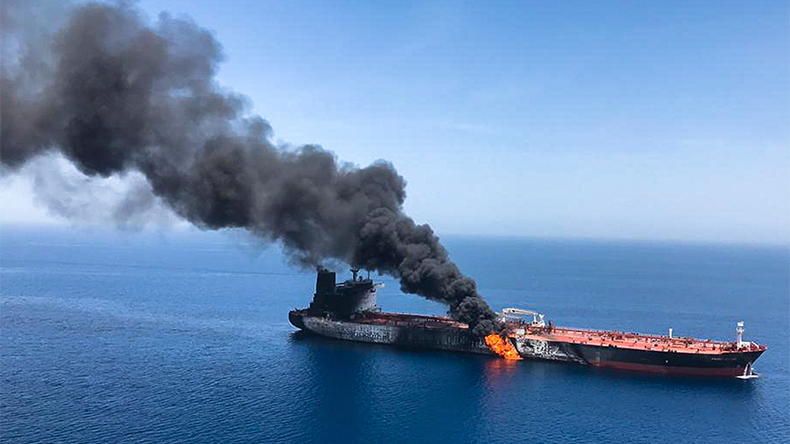 Source: © 2019 ISNA/AP Photo Front Altair burning: The shipping industry has once again found itself “caught in the middle of a geopolitical conflict over which it has no control”, says Intertanko chair Paolo d’Amico.

THE risk and cost of commercial shipping in a crucial Middle East trade lane dramatically escalated on Thursday after attacks on another two tankers in the Gulf Oman triggered the most significant maritime security alert since 2003.

Marine insurers are set to raise premiums to transit the Strait of Hormuz, through which 16.8m barrels per day of oil transits, as shipowners reassess the safety of calling at ports in Gulf countries.

Thursday’s attacks come just over four weeks after four tankers at anchor off Fujairah were targeted in similar circumstances.

The May 12 tanker attacks had the hallmarks of a “sophisticated and co-ordinated operation” requiring professional divers equipped with limpet mines and fast boats. The three countries investigating that attack, Norway, the United Arab Emirates and Saudi Arabia, concluded that operation was most likely carried out by “a state actor”, with the US firmly pointing the finger of blame in Iran’s direction.

One month on, and only hours after Thursday’s “well-planned and co-ordinated attack” attack took place, US officials have already confidently claimed Iran was responsible for these latest attacks on the laden tankers, which left both vessels ablaze and forced crew to abandon ship.

“It is the assessment of the United States government that the Islamic Republic of Iran is responsible for the attacks that occurred in the Gulf of Oman today,” US Secretary of State Mike Pompeo told reporters.

“This assessment is based on intelligence, the weapons used, the level of expertise needed to execute the operation, recent similar Iranian attacks on shipping, and the fact that no proxy group operating in the area has the resources and proficiency to act with such a high degree of sophistication,” Mr Pompeo said.

The attack’s timing, amid bellicose rhetoric and deteriorating relations between Iran, the US and its Middle East allies, is particularly sensitive. On Wednesday Iran-sponsored Houthi rebels fired missiles at an airport in southwestern Saudi Arabia, injuring 26 people.

Examining the attack on the Marshall Islands-flagged Front Altair, Dryad noted certain aspects were indeed “consistent with what would be expected of Iranian involvement”.

However, it added: “States such as Iran are rational actors, and will not conduct attacks in the Strait of Hormuz merely to ‘disrupt’ global shipping, without there being a clear national interest in doing so.

“At a time where the Iranian economy is struggling and sanctions are biting, it seems surprising that Iran would endeavour to conduct such a bellicose strategy.”

The incidents came as Shinzo Abe, Japan’s prime minister, was visiting Iran in a bid to reduce friction between Tehran and Washington.

It would be “remarkable” for Iran to knowingly target vessels that were cargoes for Japanese-operated ships at the same time that Japan’s prime minister was visiting Iran, according to Dryad.

“These inconsistencies in terms of interest and motive do not rule out Iranian involvement, but they do suggest that a wider regional narrative may be at play, and that the responsible party could in fact not be Iranian once a further investigation is completed,” the assessment said.

While the question of who carried out the attacks is now a matter for the international security actors, the shipping industry has, in the words of Intertanko chair Paolo d’Amico, once again found itself “caught in the middle of a geopolitical conflict over which it has no control”.

Stephen Askins, a London-based maritime lawyer specialising in piracy and terrorism, said: “It is obviously a significant escalation and appears to be a surface attack [unmanned drone or craft] exploding against the shell plating.

“Again it suggests a state actor, although why those ships is not clear.”

Mr Askins said the second attack on commercial shipping in four weeks raised questions about whether certain ports or areas were unsafe or dangerous, allowing shipowners to refuse to accept orders to proceed.

“It will certainly give owners pause for thought as they work out risk allocation under the contracts and their insurance position,” he said. “What constitutes danger is a difficult concept.

“Here it may be that the risk is still low but the consequences are significant.”

Shipbrokers in London said owners have yet to make any clear call on whether or not they will continue to ply the waters of the Middle East Gulf. Ships transit through there to load crude, and refined products including middle and light distillates, making it a crucial global energy artery. About 30 to 40 very large crude carriers transit every 10 days, with more than double that number of product tankers also making voyages east to Asia and west of the Suez Canal.

VLCC shipping rates have yet to be tested, said one shipbroker, adding one cargo was being worked today and that it had received “a few offers”, with owners asking higher prices.

Jonathan Moss, head of shipping at law firm DWF, noted in a statement on Thursday: “Determining the level of risk in the region is difficult as long periods of calm are followed by a spate of notifications to marine insurers of large claims caused by acts of aggression.

“Given the risk of hostility in the Gulf, underwriters will be closely scrutinising voyages on a case-by-case basis with premium increases covering vessels in the region a near certainty.”

Since May 24, London’s War Risk Committee has extended the listed areas off Oman, the UAE and Saudi Arabia, which requires owners to notify marine insurers when they enter these areas and may see additional premiums levied.

There was not an automatic uplift in premium but “there is a chance that may change and that there will be an increase in rates across the board” said Mr Askins, a partner at Tatham & Co.

“It’s down to underwriters to react as they think fit based on the specifics,” Neil Roberts, head of marine underwriting from the Lloyd’s Market Association, told Lloyd’s List.

Risk management software provider Russell Group said that its computer model indicated that that cargo insurers face exposure values of $40m for the goods on Panama-flagged product tanker Kokuka Courageous, and $25m for the naphtha on Front Altair.

The crew from Kokuka Courageous are now on the USS Bainbridge after being picked up from a Netherlands-flagged workship. Another 23 crew from Front Altair are now said to be at the Iranian port of Jask, after they were transferred to an Iranian rescue boat from the cargoship Hyundai Dubai, which took them from the tanker. Their repatriation being worked through via diplomatic channels.

Oil prices rebounded from a five-month low on the news, with Brent crude as much as 4% higher during morning trading than at yesterday’s close. The August contract was at $61.55 per barrel at 1755 hrs London time. Yesterday prices hovered at around $60 per barrel, after briefly dipping lower.

Shipping freight costs are a fraction of the oil cost, comprising about $7.30 per tonne on VLCCs from the Middle East to Asia. That is about 0.002% of the overall cost of shipping a 270,000-tonne cargo, suggesting that perceived risk, rather than higher rates and marine insurance premiums, will affect the overall oil cost.