LNG will be transitional fuel for 2030, Nor-Shipping hears

A DNV GL Nor-Shipping conference panel agreed that LNG will act as a bridging fuel up to 2030, but there was little consensus as to how 2050 targets would be achieved

Shipping leaders have little idea about how the IMO’s 2050 emissions reduction targets will be achieved, a Nor-Shipping conference panel agreed 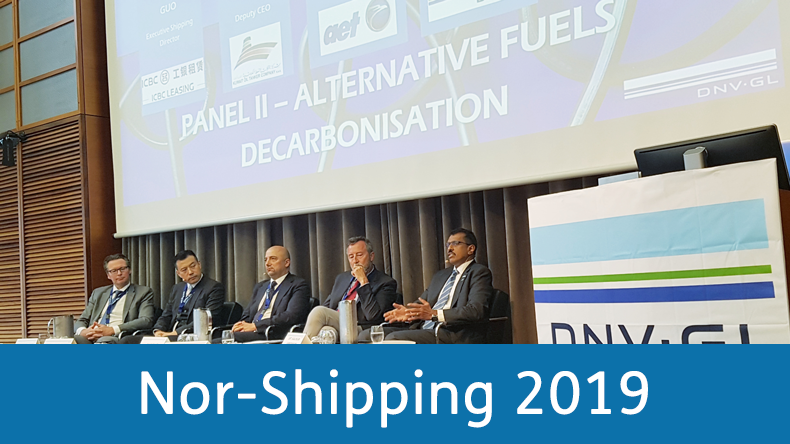 LNG is likely to be the transitional fuel to move the shipping industry towards its 2030 goals, according to the views of a panel on the opening day of DNV GL’s Nor-Shipping conference.

“I believe we can reach 2030 targets through efficiency measures, slow steaming, and alternative fuels including LNG,” said Knut Ørbeck Nilssen, chief executive of DNV GL Maritime. “The challenge is what lies beyond that.”

This was supported by Capt Rajalingam Subramaniam, head of AET.

“We are still confident about LNG as a bridging solution,” he said, adding that LNG would still play a significant role in the energy mix by 2050.

But he was certain that LNG would not be able to achieve the International Maritime Organization’s 2050 targets on its own.

While other panellists concurred with Capt Subramaniam’s assessment, there was agreement that operational efficiency measures would make inroads into the emissions reduction requirement.

“Gas is a hydrocarbon,'' said Francesco Bellusci, managing director of Scorpio Group. “Increasing efficiency is fundamental: only this will help to move toward 2050.”

An even more draconian solution was proposed by Bill Guo, head of shipping at ICBC Leasing.

“The best thing to do is to stop financing ships until 2050,” said Mr Guo. “The LNG ships now under construction will last until 2050. However, we can’t do that because Chinese shipyards would go to the government.”

A more practical solution might be for financial institutions to stop financing ships that do not meet IMO regulations, although this presented another conundrum: what would happen to the almost 10,000 ships that are currently owned — fully or partly — by the banks themselves?

The conference, which was chaired by Lloyd’s List editor Richard Meade, concluded that the period from 2020 to 2022 would be dominated by the Global Sulphur Cap and its consequences, the period from 2022 to 2030 would see focus placed on hitting IMO targets for emissions reduction by that year. But there was little consensus for how to go further in the years between 2030 and 2050.

“We [the maritime industry] won’t be able to control worldwide trading, so we can only invest in short-term solutions,” said Mr Bellusci. “We need to work across supply chain: charterer, receiver, port operator: collaboration is key.”

Knut Ørbeck Nilssen agreed, and went further. He urged a closer engagement with academia and called on politicians to bring public money to help fund R&D into new solutions. “Class is an integrator in the industry but be warned: if you expect R&D to be carried out by class or ship owners, don’t be surprised if they are squeezed by accountants.”

ECA on the fjords

How to decarbonise shipping