Little known in shipping circles until he came to CMA CGM's rescue in 2011, Robert Yildirim has become a force to be reckoned with in the container terminals industry. A plain speaker who is not afraid to vent his anger in public, Mr Yildirim has made it clear he is very upset about the way the Long Beach Container Terminal sale was handled, and how unfairly he thinks he was treated 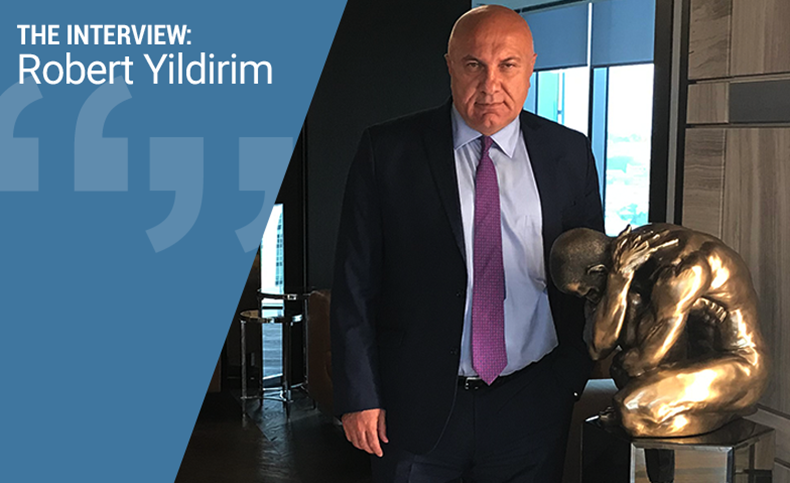 Robert Yildirim thinks the future of LBCT would have been better in his hands.

Little known in shipping circles until he came to CMA CGM's rescue in 2011, Robert Yildirim has become a force to be reckoned with in the container terminals industry. A plain speaker who is not afraid to vent his anger in public, Mr Yildirim has made it clear he is very upset about the way the Long Beach Container Terminal sale was handled, and how unfairly he thinks he was treated

ROBERT Yildirim is one of a rare breed in the world of shipping, someone who is not only prepared to speak his mind, but also let his feelings be known.

In an increasingly corporatised industry where chief executives choose their words with care and try not to stray far from the party line, Mr Yildirim is refreshingly frank and open about his business dealings.

It helps, of course, to be the boss of a private family-owned group, but even so, many others in a similar position to Mr Yildirim prefer to stay away from the limelight, and would certainly never dream of discussing a transaction that had gone wrong.

But the head of the Yildirim Group of Companies was so incensed about what happened during the final stages of the Long Beach Container Terminal sale last month that he decided to vent his anger in public.

“I was screwed,” he told Lloyd’s List as he detailed how he had been led to believe he had won the bid for the LBCT concession.

Having thought he was on the verge of clinching an acquisition that had the potential to transform Yildirim’s Yilport subsidiary, he ended up with zero, and at a considerable cost.

Mr Yildirim is not planning to seek compensation through legal action, but he certainly expects recompense in some other form from business partners who, he believes, let him down. He mentions as an example more volumes through Yilport terminals.

So what happened exactly?

Yilport submitted a bid for Long Beach Container Terminal fairly late in the process, offering $1.76bn for the automated facility and setting out ways in which the Turkish company thought it could make the terminal even more productive and efficient.

The sellers and others with a role in the disposal process were impressed by the offer, Lloyd’s List was told by those closely associated in the transaction, and the Yilport tender was shortlisted, along with four others. Seaspan subsequently dropped out, and eventually there were just two names left in the ring, Yilport and Australia’s Macquarie Infrastructure.

He met members of the powerful Committee for Foreign Investment in the US to convince them he was a committed long-term investor and that his Turkish nationality posed no risk, especially given his group’s existing US interests and strong family ties to the US. His children are American citizens.

By Anastassios Adamopoulos 17 May 2019

He also addressed Long Beach executive director Mario Cordero and port commissioners, who had asked for additional time to vet the two bids; was in direct contact with OOIL co-chief executive Andy Tung; and spoke to the JP Morgan team which was handling the sale. Finally, he talked to Macquarie since, at the time, Mr Yildirim was interested in buying three North Amercian port facilities that the Australian fund manager wanted to sell.

Piecing all the feedback together, Mr Yildirim was so certain he had won the LBCT concession that he pulled out of talks to buy the Macquarie terminals, as he could not afford both deals, which would have added up to $3bn.

“Everyone assured me, even JP Morgan, that my offer was similar to Macquarie’s, but that I was ahead,” says Mr Yildirim.

“Robert, you can get this,” he was told by those closely involved with the sales process.

It was Mr Tung who broke the news that OOIL’s new owner, Cosco Shipping, had decided at the last minute to accept the Macquarie offer.

Mr Yildirim suspects Macquarie lobbied the Australian government, which in turn urged China to accept the bank’s bid because of the two countries’ strategic bilateral interests in the bulk and commodities trades. At the same time, Chinese-Turkish relations are cool, to say the least, probably another negative for the Yilport offer.

Others have speculated that maybe Cosco preferred the Macquarie bid over one from a competitor.

For while Cosco and OOCL are customers, calling at Yilport terminals, Cosco Shipping Ports is also building up its own extensive network of ports around the world. That includes interests in two other terminals in the LA/Long Beach complex.

Either way, Mr Yildirim wants it known that he was shocked, upset and disappointed by the decision to choose the Macquarie offer rather than his.

He is keen to point out that, as a trade buyer, he would have been a long-term investor in LBCT, whereas Macquarie, as a financial institution, is likely to sell long before the end of the concession, which runs until 2051. He also felt Yilport could “tune up” the hardware and software to increase total LBCT capacity by another 20% on top of the targeted annual 3.3m teu for the facility when it is completed in 2022.

Another proposal Mr Yildirim put forward was the potential to expand the LBCT footprint into a nearby oil field that is likely to cease production in the coming decade.

As a shareholder in CMA CGM, which is a member of the Ocean Alliance, Mr Yildirim also reckons he could have brought additional business to LBCT over the medium term as transpacific volumes grow, and the French line runs out of space at its existing Los Angeles/Long Beach terminals.

“So it would have been a win-win situation,” he says.

Mr Yildirim was barely known in shipping industry circles until about eight years ago when he agreed to invest in French line CMA CGM, which was in urgent need of a capital injection.

Yet he is head of an industrial group that now has more than 10,000 employees in 21 countries, working in 11 different industries, ranging from mining, chemicals and construction, to shipping, shipbuilding and ports. Yilport’s portfolio consists of four terminals in Turkey, seven in Portugal, two in Spain and Sweden, and one in Peru, Malta, and Norway, with combined capacity of nearly 6m teu, as well as dry bulk and ro-ro traffic.

Mr Yildirim, who was number 61 in Lloyd’s List’s 2018 ranking of the 100 most powerful people in shipping, has set his sights on Yilport moving into the world’s top 10 container terminal operators. Hence his deep regret at not being awarded the LBCT concession, particularly after withdrawing from talks to buy the three North American port operations from Macquarie. A few years earlier, he had walked away from negotiations to buy Ports America because of what he regarded as an excessively high asking price.

The late Jacques Saadé accepted Mr Yildirim as a financial benefactor after rejecting some other potential investors, partly because of their shared family values.

Indeed, the Yildirim Group is very much a family business, but tragedy struck in 2017 when Mehmet Yildirim, the younger brother of Robert Yildirim and his older brother, died very suddenly of natural causes. Ownership had been split between three, and top management had to be restructured.

By David Osler 10 May 2019 The chief executive of International Group is about to quit one of the most high-profile jobs in marine insurance and spend the next five years sailing his yacht around the Mediterranean. Needless to say, he sounds a remarkably happy man Read the full article here

Mr Yildirim remains a sizeable shareholder in CMA CGM with a 24% stake, but it seems clear the Saadé family have sometimes found him hard to handle. Although a company that has generally good relations with the media, CMA CGM was not always happy with candid remarks Mr Yildirim made to the press about his investment and advice he had given on strategy, particularly in the early days of the relationship

These days, he appears to have a good rapport with CMA CGM chief executive Rodolphe Saadé, and has no plans to sell his shares, for now.

Mr Yildirim’s immediate focus remains expansion of Yilport’s activities into the US, despite the LBCT setback. He is close to signing a public private partnership agreement with Gulfport Mississippi to develop a 2.5m teu terminal there.

He also is considering some other US port investments, including a greenfield site, but LBCT was the big prize that would have catapulted Yilport in to the premier division of terminal operators.

And what really dismays Mr Yildirim is the fact that Yilport was apparently pipped at the post for reasons beyond its control, geopolitics.

“It hurts me to lose LBCT, the best terminal in the US,” he continues. “I never thought it would come to market, and it has a tremendous future.”

Now it is time to move on, but Mr Yildirim makes no secret of the fact that he thinks picking the Macquarie bid was the wrong decision, and that Yilport, with its expertise, could have made an already impressive facility even better.

“There will be other opportunities, but LBCT was the best available today, and I wanted to buy it. I love that terminal, but I lost it, not because of commercial reasons but because of political decisions.”

A plain speaker, indeed, and someone who is not going to forgive and forget what happened in April 2019 any time soon.

The Lloyd’s List Podcast: Looking beyond Brexit with the new head of the UK’s MCA