After nine days of negotiations, the MEPC 74 does not accept or reject any of the proposed measures to reduce greenhouse gas emissions. Instead it fleshes out the impact assessment procedure for suggested measures and agrees to hold additional meetings in the coming 12 months in hope of concrete action 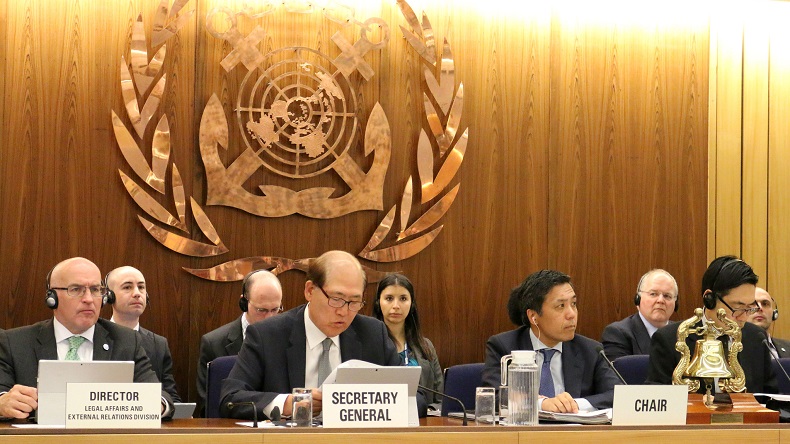 THE International Maritime Organization closed discussions on important procedural issues Friday, but barely progressed the discussion on emissions reductions measures, leaving much of the heavy lifting for a series of negotiating rounds that will take place during the next year.

The IMO Marine Environment Protection Committee met in London this week, following four days of preliminary negotiations, to implement the initial GHG strategy it adopted almost exactly a year ago.

Negotiations throughout the two weeks, however, showcased the difficulty of the task at hand, especially the deliberations regarding emissions reductions measures.

While there were proposals for short-term measures on the table, most of which had to do with operational and technical efficiency, as well as speed, the MEPC did not directly address any of them and instead chose to do that in the future.

Intersessional meetings are a round of preparatory negotiations that do not make final decisions but do much of the legwork ahead of committee meetings.

The MEPC did not prioritise measures either, as some delegations wanted, and instead agreed to effectively categorise them based on their type.

MEPC 74 instructed these next two inter-sessionals to consider measures on operational energy efficiency, on reduction of methane slip and emissions of volatile organic compounds and those that encourage the uptake of alternative, low-carbon and zero carbon fuels.

Though the MEPC pushed back the bulk of the discussion on the measures, it did resolve a key procedural issue that will affect if these and other measures are ultimately adopted.

The committee agreed on an impact assessment procedure for each proposed measure. Assessments, which are meant to evaluate the effect of a measure on states and emissions, will last between one and four meetings per measure.

Delegates agreed that the MEPC 75 and the inter-sessional held the week immediately before it will count as one meeting as far as the impact assessment procedure is concerned.

An assessment of an individual measure can entail up to four separate steps that can range from an assessment attached to the actual proposal to a comprehensive impact assessment.

The MEPC had also agreed the parameters for a GHG study that will examine emissions between 2012 and 2018, including black carbon emissions.

It will also recalculate the sector’s emissions in 2008, which is the base year used for the goals set out in the initial strategy.

IMO rejects push for immediate fuel switch in the Arctic