The IMO has officially opened what will likely be a heated discussion on harmonising rules for scrubber discharges around the world. The negotiations, which concern the operation of open-loop scrubbers, will kick off next year during a technical meeting and are scheduled to conclude in 2021 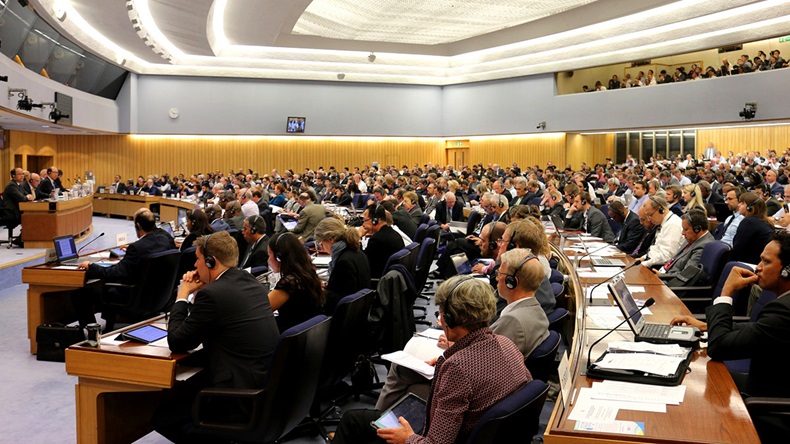 IMO MEPC 74 is meeting in London this week.

THE International Maritime Organization has agreed to start negotiations to develop rules on the waste water discharge of scrubbers.

The IMO’s Marine Environment Protection Committee, meeting in London this week, has endorsed a proposal by the European Union to “evaluate and harmonise the development of rules and guidance on the discharge of liquid effluents from exhaust gas cleaning systems, including conditions and areas”.

The EU made the proposal earlier this year amid the inconsistent global response to open-loop scrubbers, which are permitted by the IMO to meet the 2020 sulphur cap but have faced restrictions, in places such as Singapore, Fujairah and China, about concerns that in fact these devices pollute the water.

Vessels with a scrubber installed will still be allowed to burn fuel with more than 0.5pc sulphur content after the cap is implemented on January 1, 2020.

The EU does not suggest any actual measures that could be taken, but does float, as an example, a restriction in open-loop scrubber use, leading some to fear this is an effort to ultimately ban the abatement technology that some shipowners have spent millions of dollars on.

The proposal will be developed further in the technical sub committee for pollution prevention and response, known as PPR, which meets next year before the next MEPC. Discussions on the subject are set to conclude in 2021.

The next PPR will likely be a challenging gathering. The sub-committee must flesh out exactly what the scope of this harmonisation efforts is and countries and organisations make proposals on the fate of scrubbers.

Non-EU countries at the MEPC were overwhelmingly supportive of the proposal, stressing that more scientific studies are needed to understand the real impact of open loop scrubbers.

However, some requested clarity on what exactly is the goal of the EU paper is and warned that any future action on scrubbers must be based on solid scientific data.

The European Commission has raised its concerns about the impact of open-loop scrubbers, warning it could be “extremely problematic”.

Separately, the IMO is reviewing its guidelines for scrubbers, which although not binding are a thorough manual for the installation and use of the systems. It has to conclude the revision next year.

A PPR meeting in February agreed that more research is needed on the effects of open-loop scrubbers.

The discussion this week came on the heels of a public call for a complete ban of scrubbers by some environmental lobby groups, citing legal challenges that Carnival, one of the largest proponents of scrubbers, faces in the US.

After paying a $40m settlement fee with the US Department of Justice in 2017 and being put on a five-year probation for environmental violations committed by its company Princess Cruises, a court-appointed monitor found that between April 2017 and April 2018 Carnival reported more than 30 scrubber-related incidents on its vessels, many of which were related to unexpected shutdowns of the systems.

In a joint letter, the groups wrote to IMO secretary general Kitack Lim demanding a temporary moratorium on scrubbers.

“We are calling on the IMO to take the lead on avoiding the inevitable failures and resulting environmental and health impacts of scrubbers by putting in place a moratorium while the IMO reviews the technology’s marine and air pollution impacts,” they said.

Pro-scrubber lobby group the Clean Shipping Alliance 2020 said it was “dismayed” about the “unsupported” statements made by the non-governmental organisations and was unable to fathom their motives given what they identified as a clear scientific record favouring scrubbers.

“Many of these statements are counter-productive and do little to help the global shipping industry’s ongoing efforts to prevent emissions of sulphur, black carbon, particulate matter and other substances from having a detrimental impact on the environment and on human health,” the lobby group argued in an e-mailed statement.

The International Energy Agency estimates that about 5,200 vessels will have scrubbers fitted by 2024.

It forecast that scrubber installation will run at 1,900 vessels this year and a further 1,500 in 2020, but levels will then fall to about 200 installations a year by 2024 as the fuel oil differential becomes less attractive.

IMO rejects push for immediate fuel switch in the Arctic