No group has yet claimed responsibility for the damage to the tankers. Meanwhile, Iran-backed Houthi rebels have added to geopolitical tension by using drones to attack two pumping stations on pipeline that connects oilfields in Saudi Arabia to the Red Sea port of Jeddah 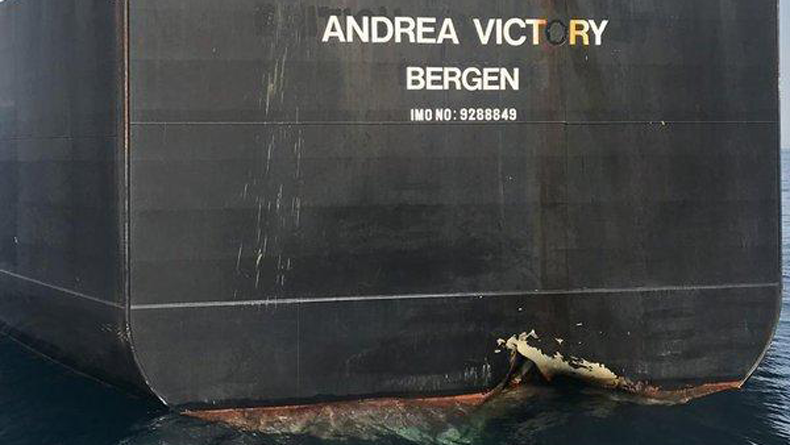 Source: UAE National media Council Damage to the Norway-flagged tanker Andrea Victory can be seen just above the water.

LLOYD’S Register has surveyed damage sustained by two of the four tankers alleged to have been “sabotaged” in waters off Fujairah at the weekend, as Norway upgraded security warnings for its vessels visiting ports in the Middle East region.

According to an unidentified US official in Washington cited by the Associated Press news agency, initial assessments showed Iran may be behind the attacks on four vessels, including the Norway-flagged product tanker Andrea Victory, two Saudi-owned tankers and an Emirati bunker tanker.

As US allies in the Middle East condemned the attack, Iran-backed Yemeni Houthi rebels added to geopolitical tension by using drones to attack two pumping stations along an east-west pipeline that connects oilfields in Saudi Arabia to the port of Jeddah in the Red Sea. The pipeline can potentially bypass of the Strait of Hormuz, a key artery for shipping crude from the Middle East Gulf.

No group has yet claimed responsibility for the damage to the tankers, which included the Bahri-owned very large crude carrier Amjad, also classed by Lloyd’s Register, and aframax product tanker Al Marzoqah, as well as the United Arab Emirates-flagged, 6,711 dwt bunkering tanker A.Michel.

“We are in the process of assessing the situation in close consultation with Emirati authorities, it’s too early to say what caused the damage,” Per Bardalen Wiggen, senior adviser for the Norwegian Ministry of Foreign Affairs, told Lloyd’s List.

He said Norway could not comment on US claims Iran was involved, nor whether the Norwegian government deemed the event as an act of terrorism.

The Norwegian Maritime Authority, which runs the Norwegian International Register, cited regional political and security sensitivities for the information vacuum, and said the classification society would be investigating the incident in line with normal procedures.

He added: “We are closely talking to the ship and the company behind the ship, there are things we can’t go public with at the moment.”

Military-level training and precision was needed to attack four ships at once, according to Michael Frodl, a Washington DC-based maritime security and intelligence consultant who runs C-Level Maritime Risks.

He said a limpet mine may have been used on the vessels, or a remote-controlled underwater drone.

“If the Iranian Revolutionary Guard is found to be the cause, or some unit of it, [there is a] query as to the legal impacts on insurance contracts, now that the US government has officially designated the revolutionary guards as a terrorist organization,’’ said Mr Frodl. “This could impact coverage and pay-outs.”

The Saudi, Kuwaiti and UAE governments have all condemned the attacks. Fujairah is a major world bunkering hub, and where around 100 vessels are often at anchor or in the vicinity at any one time.

An estimated 16.8m barrels per day of crude is shipped through the Strait of Hormuz, according to Lloyd’s List Intelligence.

Lloyd’s Register confirmed it had attended Andrea Victory and Amjad to survey damage, ensure the vessels’ safety and recommend repairs, but it did not elaborate further on any findings.

The Norwegian Maritime Authority said it was not conducting its own review, but was leaving it to the classification society.