Security alerts issued as Saudi Arabia and United Arab Emirates confirm four tankers were attacked on Sunday. But with details still yet to emerge, industry analysts have been left questioning what happened 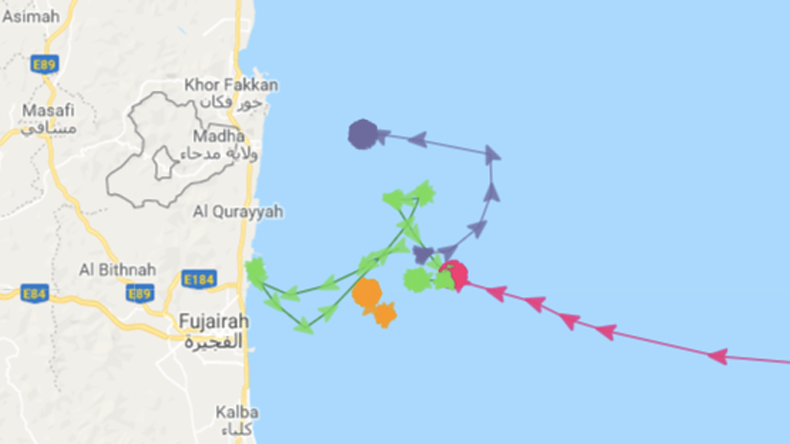 Source: Lloyd's List Intelligence Vessel tracking shows the location of the four tankers attacked at the Fujairah anchorage over the past three days.

VESSELS transiting the Strait of Hormuz are keeping security levels under review after four tankers were subject to unspecified “acts of sabotage” off the world’s biggest bunkering hub of Fujairah on Sunday.

While details of the apparent attacks remain opaque, the incident has already heightened fears that shipping lanes in the Gulf could once again become a flashpoint as tensions escalate between the US and Iran.

Both the Saudi Arabian and United Arab Emirates governments condemned the attacks in statements to their national press agencies on Monday, but without naming the ships involved, or providing further details about what happened.

Saudi Arabia’s energy minister Khalid al-Falih said the vessel structures of two Bahri vessels, which were not named, experienced “significant damage” but there were no casualties or spills. UAE officials reported four ships were targeted without providing further details.

The very large crude carrier Amjad and the aframax product tanker Al Marzoqah were reported as the Saudi-owned vessels involved. This could not be confirmed by Bahri, although both tankers were signalling they were in the area in the early hours of Sunday morning, when reports said the incident happened.

Norwegian-flagged medium range product tanker Andrea Victory sustained hull damage, shipmanager Thome Ship Manager confirmed. The ship was “struck by an unknown object on the waterline in the way of the aft peak tank while located in anchorage B off Fujairah on Sunday”, the Singapore-based company said in a statement.

West of England P&I confirmed that it provided coverage for the 58,141 dtw Al Marzoqah, which was involved in Sunday’s events, and said in a statement it was “working with the owner and authorities to deal with the situation”. Gard, the P&I provider for Amjad, declined to verify whether the vessel was involved, citing confidentiality clauses.

Bunkering tanker A.Michel was named as the fourth vessel subject to “sabotage”. The owners of the 6,711 dwt vessel, Dubai-based Al Arabia Bunkering Co, declined comment when contacted by Lloyd’s List.

Three international maritime security companies told Lloyd’s List they had been unable to independently verify the identity of any vessels involved except for the Andrea Victory. Scant information outside of government statements was available.

Intertanko confirmed the organisation sent an email to its membership warning of increased shipping risk in the region, stating there were photos of two ships with holes in their sides “due to the impact of a weapon”. The London-based organisation representing independent tanker owners and operators declined to elaborate. The Intertanko employee who had viewed the photos was unavailable for comment, said spokesman Phillip Blanshard.

The Saudi government said the incident threatened to disrupt maritime traffic including crude shipments through the Strait of Hormuz. An estimated 16.8 million bpd of crude is shipped through the strait, according to Lloyd’s List Intelligence. Vessel-tracking shows 102 ships are currently at anchor or in the waters just off Fujairah, also raising security issues for the world’s biggest bunkering port and hampering the clear identification of ships involved.

“Saudi reticence to report the incident accurately within their own media channels and the current failure to provide imagery evidence of the attack raises important questions as to the nature of the attack”, said maritime security company Dryad Global in a note to clients.

“It remains unlikely that the risk to safety of vessels and crew will increase significantly in the short term however delays to commercial operations and the potential for interactions with military/militia forces has increased,” the report added.

Ship agencies at Fujairah reported they were unable to substantiate government reports or explain what happened because it was a criminal offence in the UAE to circulate information viewed as harming the emirates’ reputation.

Gard, the P&I provider for Amjad, declined to verify whether the vessel was involved, citing confidentiality clauses.

Tensions between Iran, the US, and its Middle East allies in Saudi Arabia and the UAE have heightened since May 2, when US sanction waivers on Iran crude expotts ended. No Iranian crude shipments have loaded since then, vessel tracking shows.

A day before the attack, news emerged that the US was moving additional warships and missiles into the Middle East region. A spokeswoman for the Bahrain-based US Naval Forces Central Command declined to comment and referred inquiries to the White House.

Earlier on Sunday unsubstantiated reports circulated of explosions at the port of Fujairah affecting seven ships. These were later found to be baseless, adding to confusion. Last year the Saudi government twice claimed Houthi rebels attacked crude tankers in transit in waters off Yemen, and threatened to divert ships from the Red Sea. Houthi forces are now withdrawing from Red Sea ports under UN supervision and handing control to local coastguards.

The Saudi and UAE delegations at the International Maritime Organization both made statements at today’s Marine Environment Protection Committee meeting about the “criminal act”. Delegations highlighted the serious threat to the safety and security of maritime traffic and said it was detrimental to regional and international security.