What should Kitack Lim tell the Extinction Rebellion kids?

Whatever measures the International Maritime Organization devises to tackle maritime carbon dioxide emissions over the next five years, they need to be credible and they need to be implemented as soon as possible 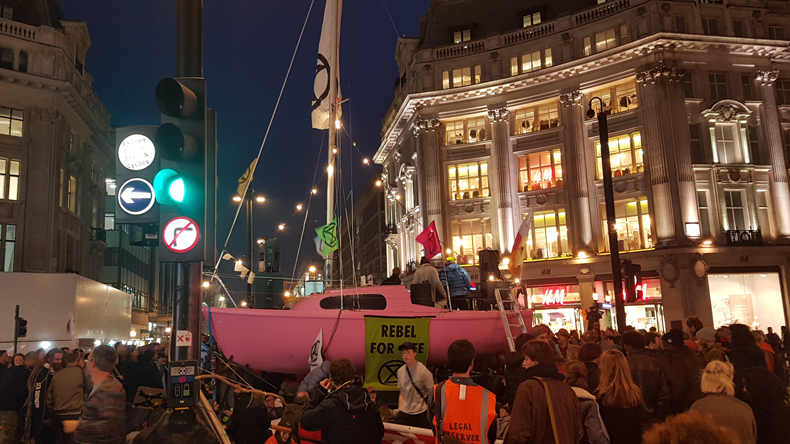 MY TEENAGE daughter is participating in the Extinction Rebellion protests that — even as I type — are disrupting large areas of central London. While I harbour natural fatherly concern about the poor girl getting busted, I can’t say I morally disapprove.

Having marched in favour of nuclear disarmament at a similar age, I understand the unshakeable conviction of each successive cohort of youth that doddering senile fools like their parents are hell-bent on destroying our one, our only, our fragile planet.

So what if XR’s demands — which centre around a transition to global net zero carbon emissions by 2025 — are of questionable practicality and perhaps stark raving bonkers? Not for nothing did the slogan ‘Be realistic, demand the impossible’ resonate so famously on the barricades in Paris 1968.

For a long time, the maritime industry seemed to shrug off its environmental responsibilities, endlessly reciting the mantra that while 90% of everything goes by sea, shipping accounted for just 2.3% of the carbon pumped into the atmosphere each year.

That’s way less per tonne-mile than our counterparts in trucking, rail or aviation, so we can just sit back and polish our green and clean halos, right?

But that’s more statistic than sound argument and trotting it out as a television interview soundbite is hardly likely to mollify the young people disrupting traffic around London’s Marble Arch.

The better informed among them may even be aware that shipping successfully lobbied for exclusion from the 1997 Kyoto Protocol and the 2015 Paris Agreement. That, in their eyes, amounts to no small scandal.

Shipping thus gets away with pollution to the tune to 800m tonnes of carbon dioxide per annum, equivalent to the entire output of Germany, Europe’s undisputed industrial powerhouse.

What’s more, burning bunkers results in significant emissions of so-called black carbon. In plain English, we call that soot and it is even more environmentally deleterious than other forms of CO2.

Given the firm scientific consensus on the need to cap the planet’s warming below two degrees Celsius, 3.6 degrees Fahrenheit, the industry has a moral responsibility to join concerted efforts to get there.

That it is trying to do, at least on paper. In April 2018 the International Maritime Organization adopted a strategy formally committing it to phasing out greenhouse gas emissions from shipping entirely, as soon as possible.

But inevitably, there is plenty of wriggle-room in the small print. For a start, ‘as soon as possible’ is clearly interpreted as ‘not in my lifetime’, and possibly not in my daughter’s lifetime, either.

The concrete objective is to reduce emissions to half of 2008 levels by 2050, and it is taken for granted that they will rise even beyond today’s level over the next few years.

While the specific reference to “a pathway of CO2 emissions reduction consistent with the Paris Agreement temperature goals” may sound admirable, read that carefully-contrived bureaucratic euphemism once again.

Deliberately or otherwise, it obfuscates the fact that even if all goes to plan, shipping would be left well outside the Paris Agreement framework, with only vague aspirations to fall within it.

Nor is the strategy binding; the language is purposely couched in terms of ‘vision’ and ‘levels of ambition’ rather than the language of legal obligation.

Even that is too much for some countries, with President Donald Trump’s US predictably leading the laggards.

The head of its delegation to the GHG talks described the very notion of an absolute target as “premature”. Small island nations — who face being wiped off the map by rising sea levels — begged to differ.

Such publicly-expressed reticence leaves cynics with the nagging suspicion that the basic motivation for the deal stems as much from the need to fend off the fiendish attentions of regulatory bureaucrats than sudden conversion to the environmentalist cause.

Finally, the mere act of setting a target doesn’t guarantee getting there. Many advanced economies are missing Kyoto and Paris GHG reduction targets by a country mile; that a handful are in compliance is more down to deindustrialisation than anything else.

XR’s strategy is to select some of those they see as the worst offenders for a dose of high-profile direct action. Some of its activists might even be contemplating gluing themselves to IMO headquarters in Albert Embankment. It is just over the river from Westminster, after all.

So, what should officials of the London-based UN agency say, should they be remonstrated with by campaigners?

Sure, there is a case for the defence; sure, in the slow-moving world of international politics, things never happen overnight. But while the IMO’s GHG strategy is well-intentioned, you don’t have to be a young hothead to regard it as singularly unambitious.

Even IMO secretary-general Kitack Lim, in his speech to mark the strategy’s adoption, explicitly acknowledged that while it amounts to a good start, it needs to be beefed up. A revised — and hopefully tougher — version is planned for 2023.

And as classification society ABS recently urged, getting tough on carbon dioxide output should now be an immediate industry priority.

As a simple journalist and not a climate change scientist, I have no idea as to the next steps that should be taken. That’s one for the boffins, and luckily, breakthroughs in new fuels and more energy-efficient designs can reasonably be expected.

None of this is likely to satisfy the wilder demands of XR’s headbanger anarchist fringe. But whatever GHG mitigation measures the IMO does devise over the next five years, they need to be credible and they need to be rolled out rapidly.