Stars will ‘start to align’ by third quarter, says Alphatanker

But demolition activity will need to rebound over the next six months and only a modest upturn is projected, the analysis shows

SUPPLY and demand models indicate the stars will start to align for tanker markets by the end of the third quarter, Paris-based shipbroker BRS said in its latest monthly Alphatanker report.

The analysis cautions that demolition activity will need to rebound over the next six months, and only a “modest” upturn is projected.

“This should then lay the foundations for a strong year in 2020 which we currently predict will be similar to 2015,” Alphatanker said in the April shipping market monthly monitor. “Although not a return to ‘the good old days’, such a rebound should propel tanker freight rates to levels permitting shipowners to make healthy returns but not to levels which would narrow arbitrage opportunities and thus hit tanker demand.”

Spot rates are now equivalent to operating costs across key routes traversed by the crude fleet, following on from a protracted period of low earnings over 2018.

Both VLCC and suexmax deliveries hit their second-highest level on record from January through to March, with each vessel class having 19 units hitting the water, according to BRS data.

Some 12 of the 19 VLCCs were held over from 2018 but the newbuilding “avalanche” reflected increased growth in long-haul voyages that outstripped the growth in shorter trades, the report said. Some 40 medium range tankers (34,000 dwt and above) were delivered to the MR tanker product tanker, swelling the fleet to 1,561 units. 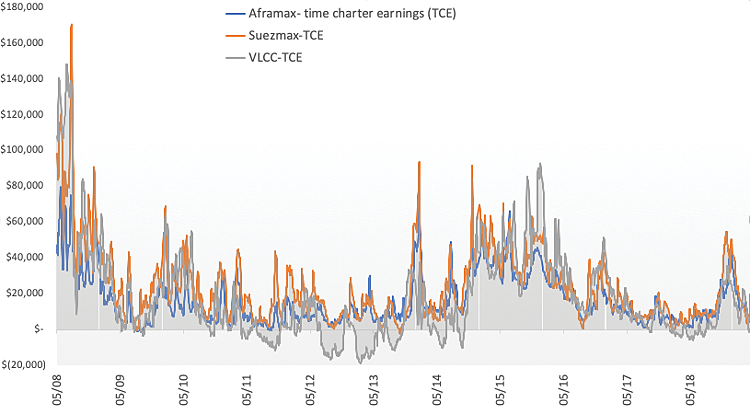 BRS estimates the avalanche of new deliveries will continue for the remainder of 2019 with a further 50 VLCCs, seven suezmaxes and 12 aframaxes to be delivered, even accounting for construction delays.

Oil demand growth is forecast to grow by 1.4m barrels per day in 2019, according to the International Energy Agency, although this figure is expected to be revised lower. There are expectations that demand will be dented as crude prices this month reached five-month highs amid unrest in in oil producer Libya and US sanctions curbing Iranian and Venezuelan production.

The wide spread between WTI and Brent crude prices that has fuelled record volumes of transatlantic arbitrage trades from the US Gulf to Europe in the last six months is seen narrowing.

The spread is now at $7.57 per barrel according to data from ICE Futures Europe, down from levels above $10 per barrel late last year. This reflects additional pipeline capacity from the Permian region to ports in the US Gulf that eliminated the bottlenecks that increased transport costs for crude reaching ports. That has lowered the WTI price, and hence narrowed the spread, altering traders’ arbitrage calculations.

The biggest crude exporter and generator of tonne-miles, Saudi Arabia, has also cut shipments this year.

The Alphatanker report observed that interest in tanker scrapping remained low so far in 2019. This was attributed to older vessels seeking short-term floating storage opportunities or owners with aged tonnage awaiting greater clarity over fuel prices and vessel economics ahead of the January 2020 switch to lower-sulphur fuel oil for international shipping.

Incremental US and Brazilian exports to Asia would also add to tonne-mile demand, the report added, alongside an additional 2m bpd of refining capacity commissioned in the east of Suez region this year. Exporters from the Middle East and Atlantic basin would be meeting this demand, the report concluded.