Not a subscriber?
Find out about tailored subscription packages:
T: +44 (0) 20 3377 3792
E: subscription.enquiry@lloydslist.com
Sign In
New to Lloyd's List?
Tags:
Sanctions

Ships appear to be collecting oil cargo at Venezuela before stopping off at Trinidad and Tobago and then setting off again, raising suspicions that cargoes are being hidden 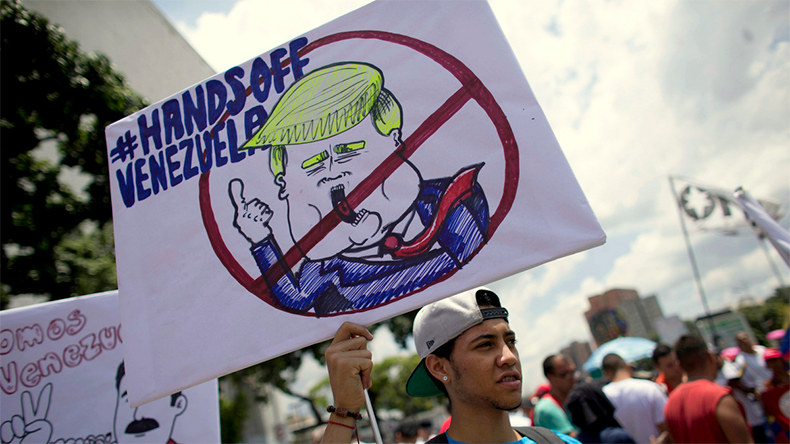 Venezuelan people protest against the actions of the US.

VENEZUELA’S national oil company is using co-loads and “false berthings” into nearby Trinidad and Tobago to disguise cargo origins as P&I clubs warn the hardening rhetoric from the hawks in Washington could sweep non-US owners and shippers into the sanctions net.

Three PDVSA tankers that loaded oil cargoes in Venezuela since March 21 then diverted to areas close to Trinidad and Tobago for several hours, according to vessel-tracking data. After spending a short time in the waters of the Caribbean island, the tankers then departed for their final long-haul destinations.

The practice was identified as “false berthing” and similar to those used by Iran’s national oil company, Kpler, a Paris-based company that analyses cargo flows, said in a report. This was likely an attempt to get new bills of lading stating Trinidad and not Venezuela, according to Kpler, which added that the cargoes were fuel oil.

Tankers identified making this trajectory include the aframaxes Mindoro and Amore Mio and long range one tanker Serengeti, according to Lloyd’s List Intelligence. Mindoro is owned by George Economou’s TMS Tankers, while Serengeti is beneficially owned by another well-known Greece-based shipping company, Dynacom. The owner for Amore Mio could not be determined.

There is no suggestion that any of the shipments were in breach of US sanctions.

The obfuscation in Trinidadian waters is the second PDVSA tactic noted to complicate the destination and origin of petroleum and crude exports.

Two suezmax and two aframax tankers that loaded in Venezuela since the imposition of US sanctions on January 28 were also involved in ship-to-ship transfers off Gibraltar over March, data shows.

Rolling power blackouts that disrupted port loadings on top of US sanctions are shrinking crude exports from Venezuela to 17-year lows. Over March, just under 1m barrels per day was loaded on 33 tankers, according to Lloyd’s List Intelligence. That is the second-lowest volume seen since 2006.

Sanctions currently restrict the sales of crude and petroleum products from PDVSA to the US unless revenues are placed in escrow, cutting off the government of President Nicolás Maduro from its biggest export earner.

On April 12, the US Office of Foreign Assets Control expanded sanctions for a second time to include companies and vessels transporting crude to Cuba.

That prompted two P&I clubs to warn shipowners outside the US they could be affected.

“While initially thought to have limited direct impact on non-US persons engaged in trade with no US nexus, statements emerging from the US administration during March and April 2019 included warnings that non-US persons dealing with PDVSA might be exposed even in the absence of a US nexus,” Skuld said in an update published April 15.

The American Club also highlighted that sanctions were unclear.

“While there are no specific prohibitions aimed at non-US persons transacting business with PDVSA, there is the potential that non-US persons could nevertheless be subject to sanctions either for operating in the Venezuelan oil sector, or for providing material assistance to, or support for, PDVSA,” the club said in its April 12 circular to members.

“Ofac has obliquely indicated that a non-US person could continue to purchase petroleum and petroleum products from PDVSA, as long as there was no US nexus,” the circular added.

Two of the Trinidad cargoes are now sailing around the Cape of Good Hope and signalling Singapore, a typical destination for fuel oil cargoes. Serengeti is making a transatlantic crossing and signalling its next port as Gibraltar. The value of an 80,000-tonne fuel oil cargo would be around $33m in the Mediterranean, ICE Futures Europe data shows.

The Iranian-owned National Iranian Tanker Co, known as NITC, was the first to stymie vessel-tracking efforts while subject to US sanctions. NITC’s fleet of very large crude carriers and suezmax tankers have used ship-to-ship transfers and co-loading in areas off the United Arab Emirates and elsewhere to avoid detection. They have also turned off vessels’ satellite transponders.