Chief executive Jeremy Nixon says his Japanese line will have scrubbers on up to 10 vessels in early 2020, while the company still expects the majority of its fleet to use compliant fuel to meet the upcoming global suphur requirement. But Alphaliner analyst Tan Hua Joo argues that carriers have strong incentives to downplay their demand for the onboard refinery. 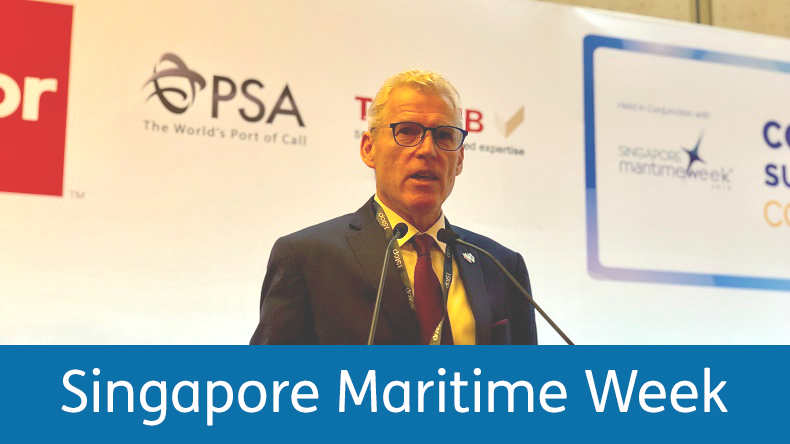 Nixon: Not a fan of scrubbers.

OCEAN Network Express has joined its competitors by installing scrubbers on its vessels, as uptake of the exhaust cleaning equipment increases in the run-up to the 2020 sulphur cap.

The carrier — formed by the three Japanese giants NYK, MOL and K Line combining their respective box shipping businesses — would have the onboard exhaust gas cleaning system on up to 10 vessels in early 2020, according to its chief executive Jeremy Nixon.

The plan is to fit a few self-owned vessels when dry docking, while at the same time having in place some short-term chartered vessels on which the owner is already installing scrubbers.

“We will not take core vessels out of operation to fit scrubbers,” Mr Nixon told the audience at the TOC Asia conference in Singapore.

ONE, which operates the world’s sixth-largest containership fleet with more than 200 ships, still preferred compliant fuel to meet the global sulphur rules, he added, but there was demand for the onboard refineries on a hedging basis.

“We are effectively not a great fan of scrubbers.”

His remarks come as adoption of scrubber technology among major carries is picking up pace.

Alphaliner estimates that over 10% of the containership fleet by the number of vessels, or 20% by carrying capacity, will have scrubbers installed by end-2020, with Mediterranean Shipping Co and Evergreen currently leading the move.

Tan Hua Joo, principal analyst at the consultancy, said there was significant incentive for carriers to downplay their appetite for scrubbers as it is arguable whether the equipment is a sustainable solution for shipping emission problems.

“But the economy of scrubbers is simply too compelling that even companies such as Maersk would change their minds,” said Mr Tan.

The Danish firm recently unveiled plans to place scrubbers on a small proportion of its fleet despite previously admitting being a long-term scrubber sceptic.

If the price gap between low- and high-sulphur fuel becomes wide enough, scrubber-fitted vessels that can burn dirtier but cheaper bunkers would gain a cost advantage.

“It remains to be seen how different carries will price the lower into their freight rates to compete for more market share,” Mr Tan added.

Mr Nixon said his company was looking at some newbuilding ideas for between 2021 and 2023, although no immediate orders were being considered owing to uncertainties created by the new environmental rules.

“When you order tonnage, you’ll have to think about not just the size of vessels, but also the technologies,” he said. “Do we go with engines fuelled by liquefied natural gas? Do we fit the ships with scrubbers or choose other solutions?”