Viking Sky engine blackout was due to low oil pressure

Owners Viking Ocean Cruises have already inspected sister ships after the two-year old cruise ship narrowly avoided disaster over the weekend as 1,300 passengers caught in a storm with no power 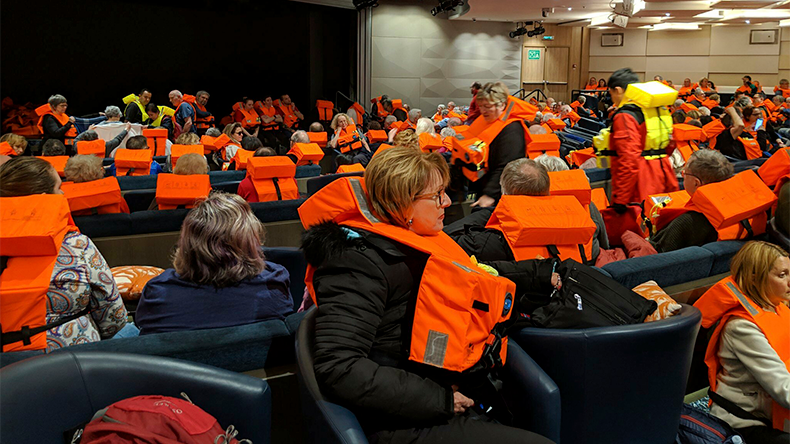 Viking Sky passengers sit on board the vessel as air crews work above to airlift some passebgers to safety by helicopter.

A COMPLETE engine blackout on board the Norwegian cruiseship Viking Sky in the middle of a storm over the weekend was caused by low engine pressure, according to the initial findings of the Norwegian Maritime Authority.

Investigators boarded the vessel on Monday following dramatic scenes of senior citizens being airlifted off the stricken cruiseship in storm conditions over the weekend after all four of the vessel’s engine’s failed and crew were initially unable to restart them.

Surveyors from the NMA and the vessel’s classification society Lloyd’s Register have now completed their initial assessment of the vessel and concluded that “the engine failure was directly caused by low oil pressure”.

According to a statement issued by the NMA on Wednesday, the level of lubricating oil in the ship’s tanks was within set limits — however relatively low — when the vessel started to cross Hustadvika.

The tanks are fitted with level alarms, however these were not triggered.

“The heavy seas in Hustadvika probably caused movements in the tanks so large that the supply to the lubricating oil pumps stopped. This triggered an alarm indicating a low level of lubrication oil, which in turn shortly thereafter caused an automatic shutdown of the engines,” said a statement from the NMA.

Viking Sky is equipped with four MAN 32/44CR engines and manufacturer MAN Energy Solutions has dispatched a team to Molde to assist in the various investigations currently under way.

The NMA has already drawn up a general safety notice about ensuring a continuous supply of lubricating oil to engines and other critical systems in poor weather conditions.

“This should be done in co-operation with the engine supplier and, moreover, be included in the ship’s risk assessments in the safety management system,” warned the NMA.

“We welcome the prompt and efficient investigation carried out by the NMA and we fully understand and acknowledge their findings,” said the vessel’s owner Viking Ocean Cruises in a statement.

“We have inspected the levels on all our sister ships and are now revising our procedures to ensure that this issue could not be repeated. We will continue to work with our partners and the regulatory bodies in supporting them with the ongoing investigations,” the statement continued.

Norwegian police and Norway’s Accident Investigation Board are continuing their independent investigations into the incident to reveal underlying causes and identify appropriate measures.

Investigators board Viking Sky as questions are raised over engine failure