Investigators board Viking Sky as questions are raised over engine failure 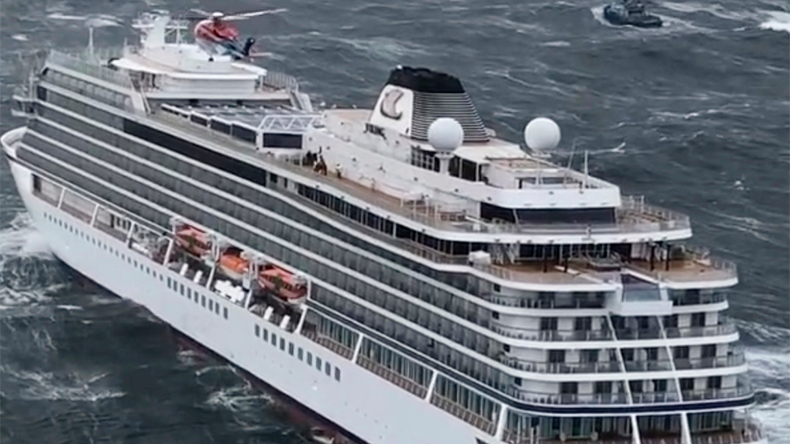 Source: CHC helicopters via AP Viking Sky after it sent out a Mayday signal because of engine failure in windy conditions off the west coast of Norway, Saturday March 23, 2019.

TEAMS of investigators, local police and class surveyors boarded the cruise ship Viking Sky on Monday shortly after the final passengers were disembarked in Molde, west Norway, having narrowly escaped disaster when the ship’s engines failed during a storm.

Both Norway’s Accident Investigation Board and Norwegian police have confirmed that they will be conducting separate investigations into the incident.

Rescue services airlifted 479 people after the Viking Sky sent out a mayday signal on Saturday as it drifted in rough waters in the Norwegian Sea to within 100 metres of land.

Rescue teams hoisted passengers — many of them senior citizens — one by one on to helicopters before the weather subsided on Sunday and the ship could be towed to port.

With the rescue operation now over questions are being asked about why the Viking Sky was sailing through storm conditions and how all four engines on a 2017-built cruise ship could fail simultaneously.

A spokesperson for Viking Cruises, owners of the Viking Sky, stressed to Lloyd’s list that the vessel had been built to the highest standards, but said that it was too early to speculate about the causes of the engine failure.

Viking Sky is equipped with four MAN 32/44CR engines and manufacturer MAN Energy Solutions has already dispatched a team to Molde to assist in the various investigations.

According to reports, possible explanations for the cause of the incident include overheating of the engines caused by air being sucked into the cooling system, which in turn could have been caused by waves as high as 15 metres. The waves could have also led to precipitates in the fuel tanks meaning the engines were not getting enough fuel.

“Prior to any assessment onsite we don’t want to indulge in any guesswork on what may have caused the incident,” a spokesman for MAN told Lloyd’s List. “We will do a thorough analysis and take the next steps together with our customer, Viking Cruises.”

“The main goal for us is to find out what caused the ship to lose the engine power,” a spokesperson for the Norwegian Maritime Authority told Lloyd’s List.

The Viking Sky is flagged by the Norwegian International Ship Register.

“We all want to know how this could have happened,” said Torstein Hagen, the billionaire chairman of Viking Sky’s owners, Viking Ocean Cruises.

“Something like this shouldn’t happen, but it has,” he said talking to Norwegian media network TV2 on Saturday.

In a statement issued to Lloyd’s List, Mr Hagen said: “The past few days have been stressful and hectic for both guests and crew alike. I would like to personally apologise for what our guests experienced. I would also like to say how impressed and grateful I am for the efforts of the national rescue services, rescue personnel, local authorities and the people along the Møre coast, and thank them for the concern and generosity they have shown our guests. I would also like to express my thanks to the crew on board the Viking Sky for their efforts and dedication.”

A spokesperson for Viking Cruises added: “We have already begun our own internal investigation and our goal is to establish a complete and thorough understanding of what happened, and we welcome the investigations that have been launched, and will fully support them.”

Viking Cruises expects the Viking Sky to be back in service in April.