Crew of general cargo vessel Hagland Captain, which also suffered engine failure in the same storm, are also rescued in a weekend of dramatic scenes off the west coast of Norway

UPDATE: Investigations begin after almost 500 of the 1,373 people on board were airlifted off in bad weather. Three of the ship’s four engines were later restarted for its trip to port 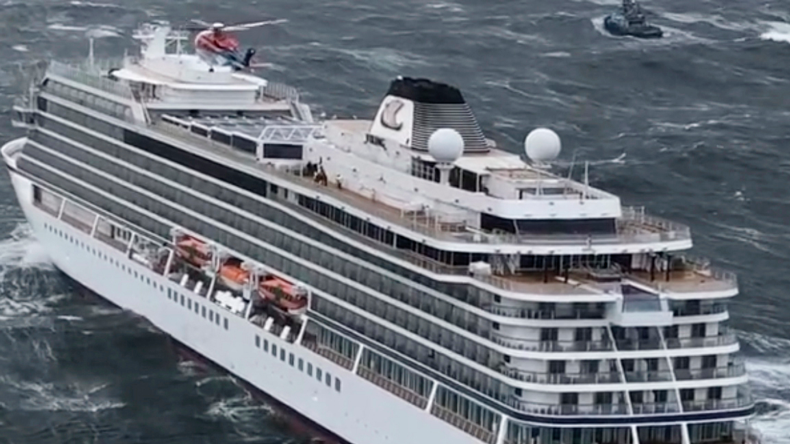 Source: CHC Helicopters via AP A rescue helicopter hovering over Viking Sky at the weekend.

THE Norwegian cruise ship Viking Sky arrived safely at the port of Molde on Sunday afternoon after the dramatic rescue of hundreds of people.

A total of 1,373 people had started the voyage and about 900 people were still on board when the vessel safely berthed in Molde on Norway’s west coast at 1620 hrs on Sunday, according to Lloyd’s List Intelligence Casualty reports.

The Viking Sky (2017-built, 47,842 gt) lost power on Saturday in bad weather and sent out a distress signal after it began drifting towards land.

Three of the ship’s four engines were later restarted for its trip to port aided by the tugs Ocean Response at the bow and Vivax steering at the stern.

The vessel will now be subject to a survey and investigations.

“It was very nearly a disaster. The ship drifted to within 100 metres of running aground before they were able to restart one of the engines,” police chief Hans Vik, who heads the Joint Rescue Co-ordination Centre for southern Norway, told TV2.

“If they had run aground we would have faced a major disaster.”

Rescue attempts had been further complicated by a second casualty nearby on Saturday, when the Hagland Captain (2012-built, 2,984 gt), experienced main engine and propulsion problems at Hustadvika, Møre og Romsdal county, at about 1900 hrs on Saturday. The vessel lost parts of a deck cargo of timber and rescue helicopters were diverted to rescue the crew.

According to Lloyd’s List Intelligence Casualty Reports, all nine crew members on board Hagland Captain were rescued.

The Hagland Shipping-owned general cargo vessel had been headed for Fiborgtangen carrying a cargo of timber.

Rescue services airlifted 479 people from Viking Sky, hoisting them one by one on to helicopters, before the weather subsided on Sunday and a tow could begin. Many of them were senior citizens.