Rising oil export volumes from Iran will likely intensify US resolve to slash the waivers given to eight countries allowing them to continue limited imports of Iranian oil. Waivers will be reviewed in May

February crude and condensate exports reached 1.38m barrels per day according to Lloyd’s List Intelligence, the highest volumes since October and the most since US sanctions were re-imposed in November.

The revival in shipments coincides with 36 National Iranian Tanker Co tankers switching their flag registry to Iran from Panama over the past six weeks, the data shows. 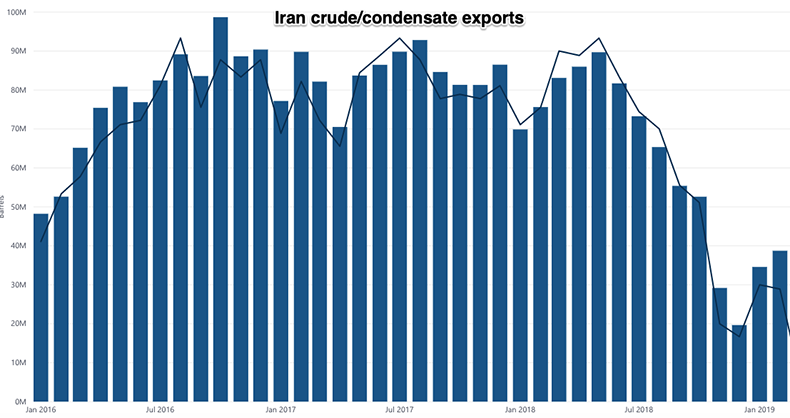 The changeover in flag registry has been under way on a vessel-by-vessel basis since early February, with at least two very large crude carriers in the NITC fleet reporting the switch as recently as March 19, according to the data.

Rising export volumes will likely intensify US resolve to slash the waivers given to eight countries allowing them to continue limited imports of Iranian oil. Waivers will be reviewed in May.

The US Department of Treasury’s Office sanctions enforcements branch, Foreign Assets Control, did not immediately respond to requests for comment.

Most of Iran’s tankers have changed flag registry, P&I club and classification society as well as switched off their AIS transponders to stymie vessel tracking since sanctions were first flagged in May. All of the fleet is listed by Ofac, covering at least 54 tankers, including 38 VLCCs and eight suezmaxes according to Lloyd’s List Intelligence.

“The pace [of exports] has picked up since February,” said Samir Madani, co-founder of TankerTrackers.com, which has highlighted NITC’s subterfuge to limit tracking of export volumes to their ultimate destination over the past four months. There have been five shipments of condensate alone lifted from floating storage off Asaluyeh this month he said.

Iranian-owned tankers have also engaged in ship-to-ship transfers in the United Arab Emirates and other locations outside Iranian waters. Transponders signalling their vessel location, draft and destination have been turned on only when changing flag, or sailing through waters in the Suez Canal, Singapore and ports in China, India, South Korea, and Turkey, according to Madani and data compiled by Lloyd’s List.

Overall, exports had been slashed by more than 50% over the last nine months, falling under 1m bpd in November and December to the lowest levels since early 2016, when the first round of European and US sanctions were lifted.

As well as reflagging, the NITC fleet swapped classification societies ahead of the new round of sanctions. The NITC fleet left Korea, BV, DNV, and Lloyd’s Register classes for China Classification, the Polish Register of Shipping and RINA from September through to November, according to Lloyd’s List Intelligence.

RINA said the six tankers classed for NITC were in the registry for a short period of time on the basis of agreements dating back to early 2018. RINA “stopped performing any activity in November 2018” according to an emailed response to Lloyd’s List. The ships “are all going through transfer of class procedure, with four actually completing it and no longer classed by RINA”. The ships left RINA class for “external reasons” the statement said adding that RINA was compliant with the requirements within the sanctions.

The Polish Register of Shipping, which also classed six NITC tankers in past months confirmed that the vessels are now with the register.