Ocean Infinity hired by the South Korean government has detected the wreck of Stellar Daisy, the very large ore carrier that sank in high seas off Uruguay two year ago. The wreck is located at a depth of 3,461m in South Atlantic Ocean

The survey team, hired by the South Korean government, found the vessel in less than 10 days after sailing from Cape Town 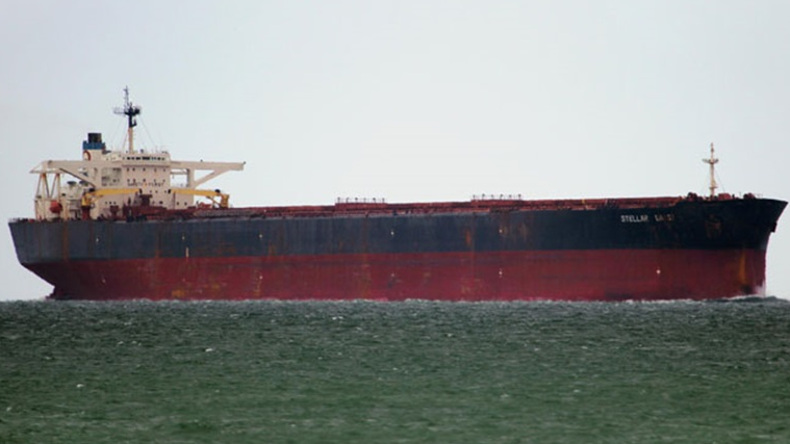 Stellar Daisy, owned by South Korea’s Polaris Shipping, was carrying a load of iron ore from Brazil to China before the accident occurred.

OCEAN Infinity, the seabed survey and ocean exploration company, has located the wreck of the lost very large ore carrier Stellar Daisy, which sank in high seas off Uruguay almost two years ago.

The ship was at a depth of 3,461 meters in the South Atlantic Ocean and was located approximately 1,800 nautical miles due west of Cape Town, the US-based company said in a statement.

The survey team, hired by the South Korean government, found the shipwreck in the less than 10 days after sailing from Cape Town.

Representatives of both the South Korean government and the families of Stellar Daisy’s crew, were present throughout the operation.

Oliver Plunkett, chief executive of Ocean Infinity said: “We are pleased to report that we have located Stellar Daisy, in particular for our client, the South Korean Government, but also for the families of those who lost loved ones in this tragedy.

“Through the deployment of multiple state of the art AUVs, we are covering the seabed with unprecedented speed and accuracy,”

Ocean Infinity said that its AUVs were capable of operating in water depths ranging from five to 6,000 meters. The AUVs are not tethered to the vessel during operations, allowing them to go deeper and collect higher quality data for the search.

Stellar Daisy, owned by South Korea’s Polaris Shipping, was carrying a load of iron ore from Brazil to China. It had 24 crewmen on board when it reportedly split and sank in high seas in the South Atlantic in March 2017. Only two Filipino seafarers survived.

The Marshall Islands, which has been investigating the cause of the incident, has yet to publish its findings.