A ‘mating dance’ is picking up pace between large refiners and large shipowners seeking to mitigate the risks of an uncertain marine fuel market, analyst says

Large shipowners in constant dialogue with large refiners stand to have first dibs on fuel types and availability; smaller shipowners who have to count on traditional middlemen, may choose to manage the uncertain transition by plumping for marine gas oil 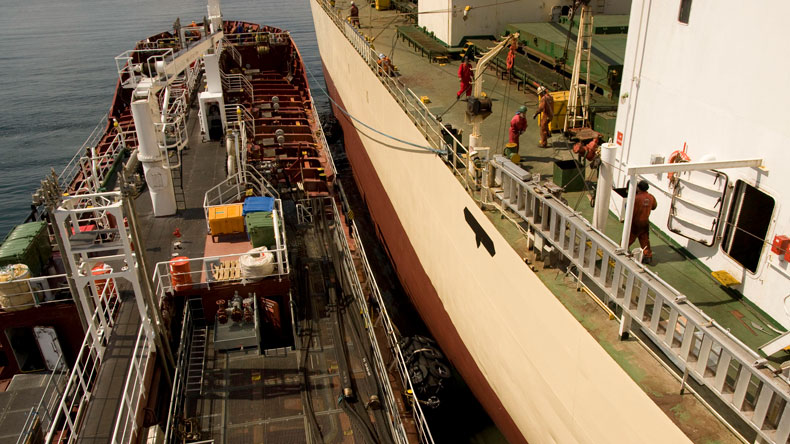 Size matters when making calls on bunkering operations in the lead up to 2020 and beyond.

TO NAVIGATE uncertain waters in the run-up to the looming sulphur cap deadline, shipping lines may choose to apply one timeless business principle: size matters.

This tenet has guided some of the decisions taken to comply with the International Maritime Organization’s global cap that will limit sulphur content in marine fuel to 0.5% from January 1, 2020.

Its intention is to run smaller ships that ply coastal trades on low-sulphur fuel oil, where compatible blends can be found, or to burn compliant marine gas oil.

The fact is, ocean-going ships tend to consume more fuel.

Scrubber investments are justifiable for these ships insofar as high sulphur fuel oil will stay the most price competitive through to 2020 and beyond.

Adrian Tolson, senior partner of consultancy 2020 Marine Energy, pointed out that by and large, the cost of installing scrubbers does not differ by ship sizes.

Shipping lines would thus far count on shorter payback periods from scrubber investments made on larger ships, which he has loosely defined as tankers and bulkers of at least panamax size.

“It may not be economical to install scrubbers on box ships that are under 7,000 teu,’’ he said. “These are typically the class of ships that ply regional or coastal trades.”

On the flip side however, scrubber investments can still make sense for “small- to medium-sized ships if they ply routes where ‘distressed high-sulphur fuel oil’ is available,” according to Mr Tolson.

Clearly, more factors will weigh in though size still appears to matter, in another sense of the word, when it comes to making bunkering decisions for the low-sulphur future.

Mr Tolson noted that a “mating dance” has picked up pace since the second half of last year between marine fuel buyers and sellers wanting to cement partnerships that will help mitigate risks in the marine fuel market in the future.

The harsh reality however, is that it is never going to be a level playing field out there.

“Smaller shipowners” are generally left out of such discussions. Mr Chiang suggested that owners in this category may likely include funds and others who do not operate ships.

Mr Tolson believes that such owners are unlikely to get priority supply of very LSFO with integrated suppliers that have refining clout.

That said, no deal appears to have been firmed up as yet between “big refiners” and “big shipowners” because LSFO supply availability outside major ports remains uncertain and no one is inclined to commit on fuel prices at this juncture.

If recent developments are any indication however, the market at large can bank on at least more clarity on LSFO prices in the months to come.

Argus Media analyst Sammy Six pointed out that since the start of this year, Taiwan’s CPC has emerged as the first large, state-owned refiner to have started publishing a daily basis price for all the grades of compliant LSFO it offers.

Beyond these price guidelines, smaller shipowners can still turn to intermediaries in the bunker trade for support.

Mr Tolson said these traditional middlemen — traders, blenders and physical suppliers to name a few — will continue to account for two-thirds of bunker lifted by ships through to post-2020.

However, given these shipowners are unlikely to get early dibs on available fuel types or specifications, they may well turn to one compliant fuel option that offers supply assurance — marine gas oil.

PIL and other larger shipowners have also cited MGO as the back-up fuel option they will turn to for smaller ships on their fleet.

Taking all this into account, it is unsurprising that Singapore made the decision, as the top bunkering hub, to mandate the use of mass flow meters for MGO and distillates delivery as marine fuel from this July.

Closed-loop scrubbers are not feasible in international shipping, says PIL

Malaysia readies refinery in time to profit from low-sulphur transition