The east coast's busiest port is set to improve on record volumes in 2017 with total volume growth in 2018 expected around 7%. Investments in dredging and the raising of the Bayonne Bridge have allowed the port to benefit from the large containerships increasingly calling at east coast ports 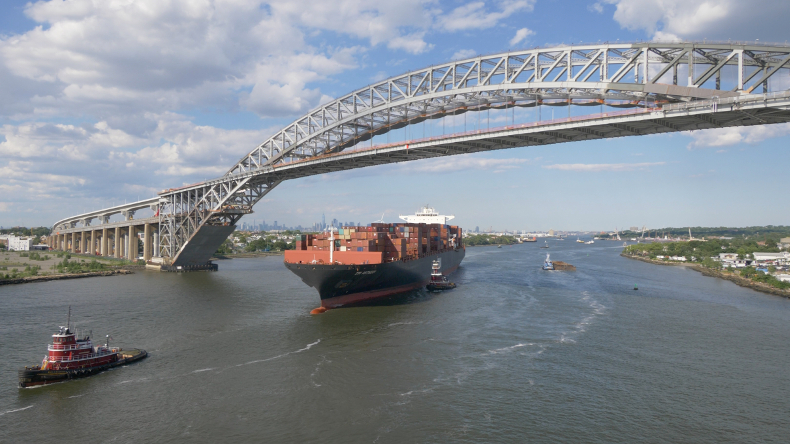 The port upgrades have helped attract bigger vessels and higher volumes but this has come at a cost of several billions of dollars.

THE Port of New York and New Jersey will see cargo volumes increase by about 7% in 2018 over the previous year, well above the 3% to 3.5% growth that had been typical years earlier.

The higher rate of growth is similar to the rapid increases seen at other US east and Gulf coast ports since an expansion of the Panama Canal has meant greater numbers of large post-panamax vessels are calling.

Over the past five years the Port of New York and New Jersey has seen a dramatic shift in the ratio of small to large ships, said port department assistant director Beth Rooney.

The port authority has invested billions of dollars in recent years to accommodate those larger ships.

Dredging the New York-New Jersey channel came with a $2.1bn price tag, and with the raising of the Bayonne Bridge, completed in 2017, the port enjoyed a 170% year-over-year increase in calls from vessels larger than 10,000 teu this summer, according to a report from Deutsche Bank.

That report notes that containerships larger than 15,000 teu make up just 10% of global capacity, but account for 45% of newbuild capacity.

Ms Rooney said there was continued investment in infrastructure and associated technology as all six of the port’s terminals worked on new improvements.

Situated within 36 hours of 125m people, those investments are about maintaining market share in a very large local market.

Ms Rooney said that as the port worked to accommodate larger vessels, she had seen evidence of a sort of specialisation developing both within the Port of New York and New Jersey and along the east coast.

The port’s four major terminals are able to handle ships of up to 18,000 teu while the two others cater for smaller ships.