Getting Closer to the Customer


There is growing interest and investment in Port Tampa Bay, the port closest to Florida’s fastest growing region.

Significant non-maritime factors are behind the current rise in fortunes and interest.

A major influence is economic growth within Florida itself. Two years ago, the state overtook New York to become the US’s third-largest.

Another is a series of land-side developments in trucking, including driver shortages, ELD (Electronic Logging Device) requirements which govern driving hours, and rising fuel costs. Between them, they are dramatically improving the viability of bringing containers to Florida from farther afield.

“Shippers and distribution companies are seeing the advantages of being able to bring goods ashore in Florida. For those looking to access the major population centres here, using Port Tampa Bay instead of — for example — Savannah, Georgia saves about $1,000 a container and a five to seven-hour drive,” says Wade Elliott, Port Tampa Bay’s VP Marketing & Business Development. “It’s pushing those in the freight sector to realign their movement strategies. That includes relocating their distribution and fulfilment centres closer to final markets.”

Port Tampa Bay is Florida’s largest in terms of tonnage and geographic area. Handling 34m+ tonnes of cargo a year, it covers some 5,000 acres. In 2016 it was recognised as North American Port Operator of the Year by Lloyd’s List, and in 2017 was named Logistics/Transportation Provider of the Year by American Metal Market at its annual AMM Awards for Steel Excellence.

“What really sets us apart is our diversity,” continues Elliott. “Our lines of business include containers, liquid and dry bulk, break bulk, refrigerated cargo and ro-ro. This includes construction and building materials, consumer goods, food and beverages, and energy and agricultural products. The big shipping companies are getting it — on 3 December COSCO announced it was adding Port Tampa Bay to its Gulf of Mexico Express service, offering direct container service from Asia, with the first vessel scheduled in Tampa in 1Q19.

“We’re also a major cruise homeport, welcoming over 1m passengers a year, and an important hub for shipbuilding and repair.” 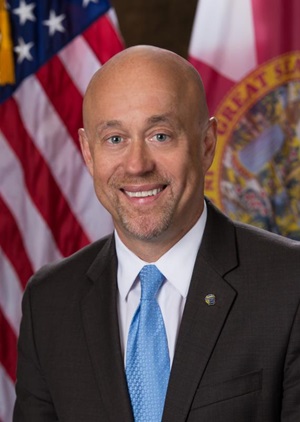 Its location at the geographic centre of the state places Port Tampa Bay closest to Florida’s largest and fastest-growing market: the Tampa Bay/Orlando I-4 Corridor. Home to almost half of Florida’s 21m+ residents and welcoming the majority of the 120m tourists visiting the state annually, Central Florida is a large, expanding consumer market.

The I-4 Corridor hosts Florida’s largest concentration of distribution centres. From that central location, importers/exporters achieve significant truck delivery cost savings Florida-wide, the Southeastern US and beyond. For those dealing with the demands of same-day service, tighter delivery windows and shorter lead times, the advantages are obvious, Wade adds.

“Port Tampa Bay’s proximity to the major global trade lanes, including Latin America and Asia via the expanded Panama Canal, means it is also ideally positioned to handle Florida’s growing exports/imports. The growing populations and markets in Florida and Texas, as well as the increased industrial activity throughout the (US) Gulf region, are driving cargo volumes and making this market increasingly attractive in the eyes of the ocean carriers, particularly as they upgrade their services with post-Panamax tonnage,” he says.

“Together with container terminal operator partner Ports America we have invested in post-Panamax cranes and developed a phased build-out plan to quadruple the size of the deep-water terminal. Dedicated truck ramps connect the port directly to the interstate system and on-dock unit train rail access provides smooth connections to markets across Florida and the US. Another recent development was the opening by Port Logistics Refrigerated Services of a state-of-the-art on-dock refrigerated warehouse. This will serve the region’s growing need for food and beverage products and its significant grocery retail presence.”

That master plan, named Port Vision 2030, is a supply chain-driven strategy, being developed in partnership with local BCOs, says Wade.

“Port Vision 2030 underpins some $1.3bn of capital expenditure over the next 10 years. That’s in addition to downtown real estate development by several different organisations which will amount to $3bn and which will benefit our cruise offer.”

A seven-point approach will:

“Port Tampa Bay’s significant real estate holdings are one of its greatest assets,” concludes Elliott. “They include significant parcels of industrially zoned waterfront property available for lease for new manufacturing, industrial development and distribution projects focused on exports and imports.”

The future for expansion looks particularly bright in light of the US public policy Brookings Institution lifting Tamp Bay 120 places in its 2018 ranking of the top 300 expanding metropolitan areas globally.