Next year will be a transitionary one for shipping and environmental regulations. In 2019, the industry and the International Maritime Organization will have all eyes on the 2020 0.5% sulphur cap and much commercial interest will not be given anywhere else. But progress, or a lack thereof, that regulators make on reducing greenhouse gases next year could have far greater consequences than the new sulphur rules 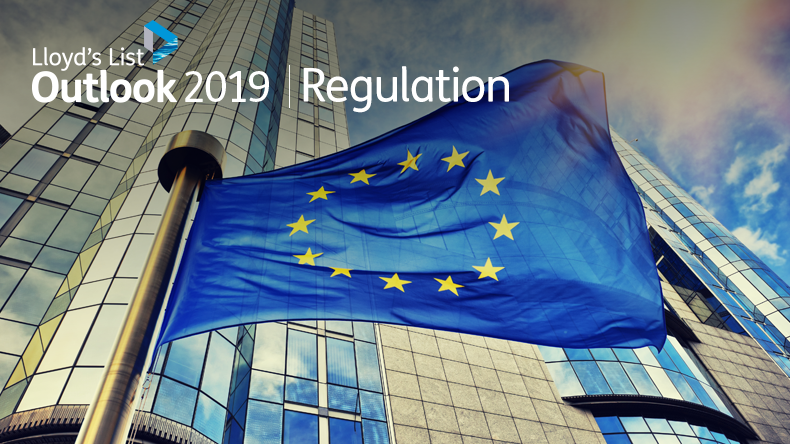 THIS year was one of crucial achievements, heightened dispute and loose ends that were never fully tied up in the maritime regulatory landscape.

Next year should start to offer some more clarity, but if we had one forecast to make with some certainty it would be that environmental regulation will continue to dominate both companies’ and policymakers’ attention.

There will only be one high-level International Maritime Organization environmental meeting in 2019, in mid May, preceded by an IMO working group meeting dedicated solely to greenhouse gas emissions.

Expect this Marine Environment Protection Committee meeting to be even more intense than the two that took place in 2018, and make consequential decisions on the 2020 sulphur cap, new decarbonisation measures and the future design of ships.

The sulphur cap’s January 1, 2020 introduction date will not change but 2019, and the first half of the year in particular, should definitively answer any questions over a sanctioned phased implementation.

MEPC 73 thwarted in October an attempt to introduce an experience-building phase after the sulphur cap comes into effect, which some perceived as a covert effort to ease in implementation, amid vocal concerns about the safety implications of 2020-compliant fuels.

Instead, it agreed to hear new proposals on strengthening data collection and analysis around the cap and in particular fuel quality.

But the immovability of the introduction date and the MEPC’s decision do not mean that an implicit transition period, where enforcement will be more lenient, is impossible.

Nor do they mean that there will not be renewed efforts at the IMO to introduce a phase-in or transition period. That there is one MEPC left before 2020 means that any such attempt will likely be forceful, well thought-out, and is perhaps already being planned.

Proposals to the MEPC can be submitted up to between seven and 13 weeks before it convenes, so expect early 2019 to see moves towards co-ordination among those who might seek an explicitly lenient enforcement approach in the early phases of the cap.

The IMO will also finalise a set of guides to help ships implement the cap, including a standard format for reporting non-availability of complaints fuels, known as FONARs.

After making a landmark decision in the spring, the IMO came back down to reality in the autumn and it is clear that wider political considerations will supersede any technical ones on the issue of cutting greenhouse gases.

The IMO adopted an initial GHG strategy in April that commits to slashing shipping’s total annual GHG emissions by at least 50% by 2050 and phasing them out within the 21st century, as soon as possible. It also agreed to reduce shipping’s CO2 emissions per “transport work” by at least 40% and aim towards 70% by 2050, compared to 2008.

Though in a broader sense it means carbon intensity, “transport work" will need clear-cut definitions for each vessel type soon and MEPC 74 may well touch on that.

It may appear to be a semantic detail but the sector is beyond making vague commitments and regulators will need to address ambiguities of this kind urgently to enable the actual applications of the strategy.

But perhaps before they get to that, regulators will begin developing short-term emissions-cutting measures they will officially adopt before 2023, as per the new pledge they made during MEPC 73.

Next year, and MEPC 74, will see a struggle between those who want immediate adoption of expedient GHG emissions reduction measures and those who will seek to extend deliberations, particularly on account of the potential negative effects these measures could have on developing and less developed states.

This will be a lasting political dispute, which shipping lobbies can do little to control or affect, aside from joining the camp that benefits them the most. But the outcome of these discussion will have a considerable impact on the shape and timing of new rules the industry must follow.

Vessels worldwide will also have to begin submitting data on their emissions to the IMO beginning on January 1, 2019 under the organisation's data collection system.

This IMO’s strategy will be revised in 2023 based on a several factors, including an upcoming IMO GHG study that will examine shipping’s emissions between 2012 and 2016, and the IMO DCS between 2019 and 2021.

The European Union’s more stringent data collecting scheme, the monitoring, reporting and verification system (MRV) came into effect in 2018. This is particularly important, not least because the European Commission will publish the first round of MRV data in mid-2019.

And unlike the IMO DCS, which will also be public, the MRV will explicitly identify individual vessels.

Aside from putting pressure on individual companies to improve their performance, we should expect the MRV to form an important part of the evidence delegations use to advance their own agendas in the IMO and thus affect the short-term GHG emissions reduction measures that the industry has to follow.

Long before the controversy around the 2020 sulphur cap and disagreements over shipping’s GHG emissions targets, there was the EEDI.

The efficiency-improving measure, which was adopted by the IMO in 2011 after a very rare roll call vote at MEPC to help curb GHG emissions, mandates that newer vessels are built to be more efficient than the average performance of their fleet type between 1999 and 2008, known as the reference line, by a certain rate, known as the reduction rate.

The second phase of EEDI rules kick in during 2020 for all vessels, but EEDI phase 3 is up for grabs and the story so far foretells varying standards for different types of ships. Many hoped that in 2019 all the details would be finalised, but that will not happen until 2020.

Amid sharp divisions among delegations, MEPC 73 pushed back deliberations to MEPC 74, foreshadowing another challenging negotiation with no likely victor at the moment.

Any decisions MEPC 74 makes will be preliminary. Owners and yards will know the new rules only in 2020, when MEPC 75 convenes and makes its final compromises in 2020.

The European Union has given the IMO and the industry quite a few headaches over the past few years with its insistence on applying regional rules, one of which is the EU Ship Recycling Regulation.

Beginning on January 1, 2019 all vessels sailing under an EU flag at the end of life will have to be recycled at one of the yards on a list sanctioned by the EU. With just a few weeks to go, the EU has only approved EU yards, which claim a negligible share of the global scrapping market, two Turkish yards and one in the US.

While additions to the list do not stop at the end of the year and could happen at any point, the fact that the list is heading for implementation without any Indian yards approved is important and perhaps a sign of things to come.

A lot has been made about whether the new rules are really enforceable or if owners will just opt to change to a non-EU flag right before selling the vessel to cash buyers who then scrap the ship.

Dutch reefer owner Seatrade was prosecuted earlier this year for breaking EU waste laws by illegally recycling ships. Seatrade is disputing the decisions but the case is evidence that at least some European authorities will be keen to investigate potential violations of the new recycling regime.

The new European rules come in just as China exits the global scrapping market. The country, which has traditionally been among the big five recycling countries, will ban imports of steel for scrap beginning in 2019.