There’s a greater hurdle for shipping to cross in its quest for efficiency than tardy regulators or complacent senior managers, an industry briefing at SMM was told 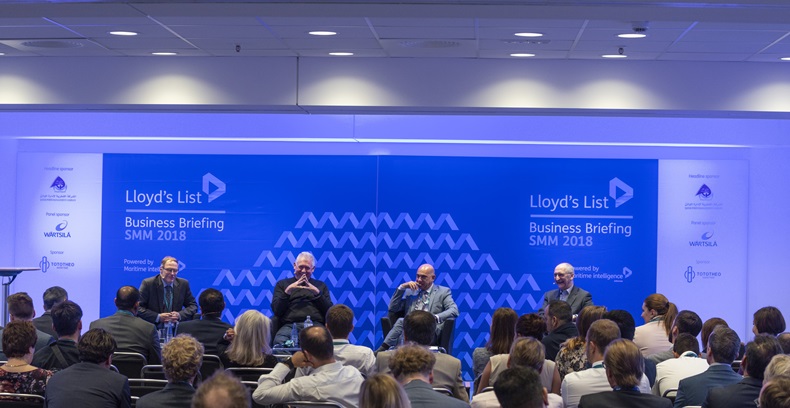 The real obstacle faced by shipping today is a business model that’s no longer fit for purpose. That was the conclusion reached by speakers at the Lloyd’s List Business Briefing in Hamburg last month.

The drivers of improved efficiency stumble at a higher hurdle than whether regulators are too slow, whether technology is evolving too fast, or whether human resources are really being used appropriately. The main obstacle is a traditional way of working that fails to provide the regulations the industry needs, fails to recruit managers from non-maritime businesses with the remit to challenge traditional thinking, and fails to recognise that new equipment is just another level of complexity unless it is an integral element in a solution to a defined problem.

Andreas Chrysostomou, chief strategy officer at Limassol, Cyprus-headquartered Tototheo Maritime, has a background in the regulatory environment. He agreed that there is too much legislation but it is not volume that worries him, it’s the disjointed nature of that legislation that forces seafarers to become “fantastic scientists, fantastic biologists.” Regulators are regulating in the same way as they used to regulate in 1948 [when the IMO was established]. However, he cautioned, “don’t blame the regulators… some legislation takes seven or eight years until it comes into force”, by which time the industry has changed.

Mr Chrysostomou recognised that the industry is developing far faster than legislation. However, rather than isolating the International Maritime Organization for criticism, he believes “the model will break by itself. Let’s get our act together; let’s make transformation happen in the way communities and society wants.” He urged international regulators to start thinking how this could be done. The process of getting new legislation in place is time-consuming and expensive at a time when finance is in short supply.

Concurrently, “the human resources landscape is changing faster than shipping is dealing with it,” declared management consultant Chris Wincott. He was unimpressed with the way shipping companies in general, and top executives in particular, are managing change. Senior officers on board ship have told him they are uncomfortable. Their role has radically changed over the past decade yet, according to Mr Wincott, the shore side mistrusts seafarers. “Seafarers are smart, dedicated, and intelligent. We need to involve them more in drafting regulations, and before putting technology onto ships.”

Senior executives “think they are there to do what the business did last year, only a bit better. You only change something when it goes wrong”

Among the immovable obstacles he sees is the attitude of very senior managers who have come up through the industry but who struggle who accept ideas from external sources. These managers “don’t know what their role is; they are not at all comfortable with the idea that leaders are there to develop vision. People think they are there to do what [the business] did last year, only a bit better. You only change something when it goes wrong.”

He believes many companies have vision and will start doing things no one has even thought of regulating. They will recruit from outside and change the business without knowing how to run ships. Some companies bring in people deliberately to shake up the business.

The need to transform the business model of most shipping companies and the attitude towards change of almost all the industry was echoed by Frank Coles, then chief executive of Wärtsilä Voyage Solutions and now chief executive at Wallem (Wallem Group). Technology on its own won’t achieve much headway in the pursuit of efficiency, he conceded. “You can’t keep laying technology on top of what’s there, without changing the business model and attitude: it starts at the grass roots level…. Technology is an enabler, not a panacea.

“The office ashore still tells the ship’s captain what to do even though the captain still has responsibility. Anyone who denies that is living in a fantasy land”

“Today the office ashore still tells the ship’s captain what to do even though the captain still has responsibility; anyone who denies that is living in a fantasy land – it’s a strong master who says ‘no’.” He added, “We should be moving towards a collaborative environment; you have to start again. Technology is useless until we do this.”

The change to digitalisation requires a “complete re-engineering of the corporate culture” and the way business is done. Shipping must transform its technology, processes, and attitude, he said. That starts with the chief executive and the board: if they are not willing to change, neither will the company.

All three speakers agreed that neither autonomy nor blockchain, digitalisation or AI would be the gamechangers the industry hopes (or fears) unless something more granular happens: the transformation of the traditional risk-averse, siloed, just-about-managing business model into a nimble, externally-connected, logistically-driven maritime solution. If that does happen, in a generation’s time smart technology will link the entire supply chain — including ships.

There will still be regulation, insisted Andreas Chrysostomou — and it will be international in nature, rather than regional or national — but it will be seen as beneficial to the industry and not an obstacle. It’s likely there will still be people on board and in offices, said Chris Wincott, however he reiterated the greater need was for a change of managerial culture rather than a reduction in the number of seafarers. And although there are plenty of technology-based solutions available, Frank Coles concluded, until there is a higher degree of standardisation and improved human-technology interface, the quest for a more efficient industry would be held back.

The speakers were fully aligned in that none of the elements — technology, regulation, and human resources — are sufficient in themselves as drivers of maritime efficiency. Co-ordination is urgent, but even more urgent is the necessity to rethink the way shipping works. Already 20 years behind some parts of the logistics supply chain, shipping has a great deal of catching up to do.