The UK Chamber of Shipping chief executive — head of Britain’s main shipowner trade association — has been fascinated with the sea since his boyhood in 1960s Gibraltar. Now his modern-day priorities include Brexit, the sulphur cap, diversity and free trade, but he says the first task is to meet Chamber members 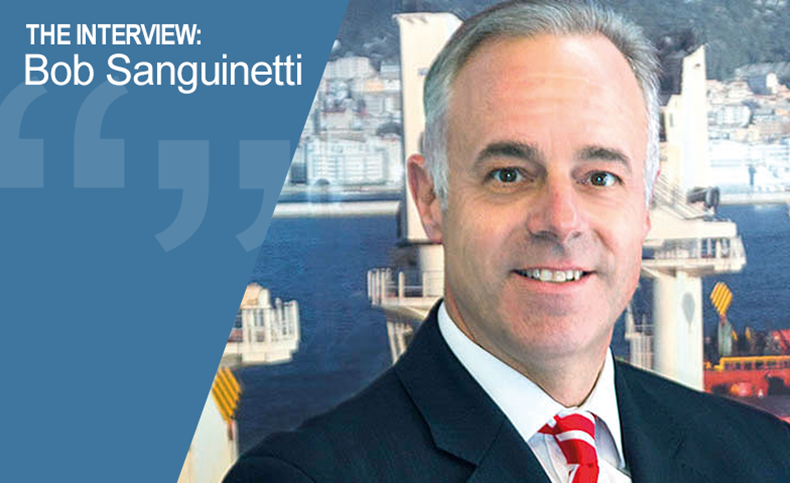 The UK Chamber of Shipping chief executive — head of Britain’s main shipowner trade association — has been fascinated with the sea since his boyhood in 1960s Gibraltar. Now his modern-day priorities include Brexit, the sulphur cap, diversity and free trade, but he says the first task is to meet Chamber members

UNSURPRISINGLY for a schoolboy growing up in Gibraltar in the 1960s and 1970s, Bob Sanguinetti was always captivated by the sea.

Half a century later — after three decades in the Royal Navy and more recently a stint running Gibraltar Port Authority — he finds himself sitting behind a desk a stone’s throw from Southwark Cathedral, as new chief executive of the UK Chamber of Shipping.

Running a trade association is a long way from commanding warships in battle conditions, as Mr Sanguinetti did in both the first Gulf war and the Kosovo conflict.

But he is confident that many of the skills he learned in the Royal Navy are eminently transferable.

“The principles of leadership are the same in any environment,” he notes. “I’ve always believed that if you want to get most out of your team, you treat them collectively and individually exactly as you would want to be treated yourself.”

The secret is to show respect, ensure that people are aware of their roles, and an awareness that a team can only perform as well as its weakest link, he says.

After starting his latest position as recently as last July, his immediate priority is getting properly acquainted with the UK merchant shipping scene.

In the first instance, that entails sitting down for face-to-face discussions with the Chamber’s 200 members, who range from shipowners of all shapes and sizes to tug companies, offshore operators and maritime services firms such as shipbrokers, law firms and marine insurers.

“My first task is to get a really good understanding of what the concerns and what the issues are. I’m going out, I’m engaging directly, and it’s something that I need to do not just in London, but across the UK shipping community.”

But it already seems clear that one issue is going to be top of the ‘to do’ list for much of the coming period, and that issue, of course, is Brexit.

Mr Sanguinetti has already set out stall on this one, at least in part, in an earlier interview with Lloyd’s List. A no-deal Brexit, he warned then, would have a huge impact on trade, and not a positive one either.

“It effects, to a greater or lesser extent, the wide shipping community. On the one hand, it effects the ferry operators who are offloading 8,000-9,000 trucks a day through Dover at one end of the UK to Holyhead at the other end of the UK,” he comments.

Doug Bannister to take over the port in March 2019, just before Brexit, Dover’s biggest concern, kicks in

In addition, there is also a need to understand the post-Brexit regulatory framework, so that the shipping industry can support logistic companies and satisfy the demands of both the business community and consumers.

Cruiseship operators need to know the implications of leaving the EU for duty free goods and visa requirements for passengers who wish to come ashore in the UK.

If the UK can strike new trade deals, that will lead potentially to new trade, perhaps with some emerging markets in southeast Asia and Africa, and thus increased demand for container shipping.

And all British shipping employers, whether they are hiring seafarers or professionals for shore-based roles, need the ability to attract best people to jobs in the UK and on UK flag vessels. Work visas and mutual recognition of qualifications are necessary to ensure a continued flow of talent

“I expect we will go through some sort of transition phase, so we do not have to have all the answers and all the infrastructure and protocols in place by 29 March.

“But it would certainly help to get an idea — sooner rather than later — of what the destination looks like, so we can plan to get there, with interim arrangements in the meantime.”

While shipping is never going to have the electoral salience of commuter rail fares or building new bypasses, politicians do on the whole get its centrality to the UK economy, Mr Sanguinetti insists.

He cites in evidence the Maritime Growth Study of 2015, the subsequent review, and Maritime 2050 strategy.

The CoS is guaranteed an input into the relevant policy areas, and has built a good relationship with government.

“The relationship across government departments interested in shipping is working much better than it might have been a number of years ago. It is not just the Department for Transport, it’s Business, Energy & Industrial Strategy, it’s the Department for International Trade. The relevant departments are engaging much more closely than they were in the past.”

Second only to Brexit in the new man’s in tray is the sulphur cap. Is British shipping ready for 2020, I ask him?

“There is still an element of wait and see. But by and large, most companies have devised their own strategies for dealing with the introduction of the sulphur cap,” he says.

Solutions are based around the fitting of scrubbers or the use of low-sulphur fuel oe distillates, or some mixture of the two. Meanwhile, shipping companies are talking to suppliers to ensure that all the necessary infrastructure is in place by 2020.

“One concern I have is the need for uniformity in enforcing and policing the new regulations, to ensure that the UK shipping community is operating on a level playing field with the wider international shipping community.

“What is still not totally clear is how that will be implemented across jurisdictions. But that is something we will be working very closely with the DfT to ensure.”

Cargill, DNV GL and Rainmaking positively surprised by the loud response from start-ups to help offer decarbonisation solutions for the industry

The sulphur cap may even go some way to improving the industry’s image with the wider public. But Mr Sanguinetti believes that in recent years, shipping has come a considerable way in presenting itself in a much cleaner, fairer and more accurate light.

“Clearly, there will always be tensions between adhering to environmentally-driven regulations and the commercial imperative.

“But there’s no reason why they can’t both live in the same space, and in the UK shipping community, that is very much the case.”

Mr Sanguinetti welcomed the International Maritime Organization’s stated intent to halve carbon emissions by 2050 and eventually eliminate it altogether, which he described as a challenging but realistic target.

Another of his priorities will be safety, which he has since his time in the Royal Navy regarded as something of paramount importance. Safety is something that P&I clubs have long taken a lead on. But Mr Sanguinetti believes the buck stops with the owners.

“It’s a job for everybody. As the representative body of the shipping industry, we represent shipowners and we represent seafarers working on their vessels, so this is something that spans across the divide.”

Welfare at sea is another important issue. In an era of increased automation and leaner manning, we need to understand the impact on individuals at sea, who are still spending considerable amounts of time away from their loved ones.

He is also an advocate of diversity, and readily admits that the industry hasn’t exactly covered itself in glory in opening up opportunities for women to serve at sea.

“Women represent about 3% of the seafaring community,” he says “We can do better, and I welcome initiatives such as Women in Maritime, being spearheaded by Maritime UK. We’ll continue to support that.”

Finally, he also believes that a trade association representing the shipping industry has a responsibility to promote free trade. Free trade brings prosperity, shares prosperity, and leads to growth to all concerned, he maintains.

“It is perhaps of a little concern that we have heard rumblings of protectionism over recent months. We are very much supporters of free and open trade.

“If Brexit brings with it the opportunity for further trade across the globe, we very much welcome that.”

Bob Sanguinetti was born in Gibraltar in 1965 and studied civil engineering at Oxford University and a war studies MA at King’s College London on a Royal Navy scholarship.

After graduation, he spent the best part of three decades with the RN, rising to commanding officer on both a minesweeper and a frigate.

He also undertook a wide range of desk jobs for the senior service, with involvement in naval procurement, ending up as head of intelligence at the RN’s national operational headquarters in Northwood.

In 2014 he took his first civilian job, as chief executive of the Gibraltar Port Authority, turning around declining volumes of bunker sales and cruiseship calls and instituting double-digit growth.

Now that three grown-up daughters have fled the nest, Mr Sanguinetti lives with his wife, his springer spaniel Tinto and his “very lazy cat” Toffee in Petersfield in Hampshire. That gives him a one-hour rail commute into London, and a 15-minute walk the other end.

“I like historical novels, because I like history, but I like history brought to life and made more vivid,” he says of his relaxation pastimes. He particularly enjoyed Edward Rutherford’s book London, which follows a number of families from the Celtic era to the late 20th century.

His favoured music is 1980s rock, including bands such as the Eagles, Dire Straits, Robbie Williams and Coldplay.