First time at Pride for many seafarers who represented UK shipping companies BP Shipping, Wightlink, as well as Maersk 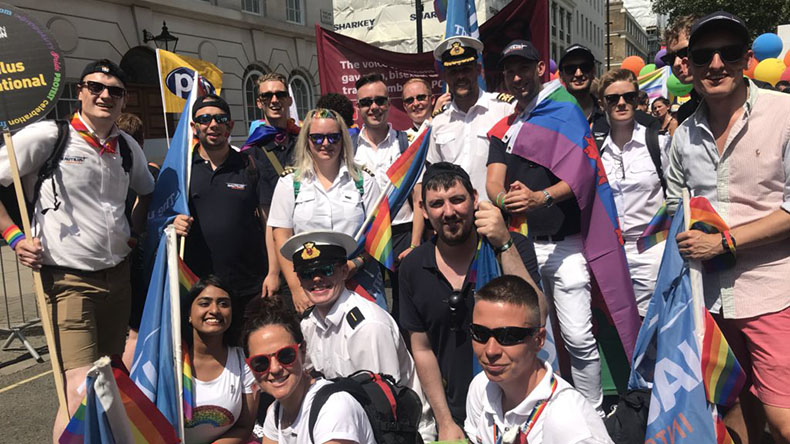 Pride: Friends and family walked in support of LGBT+ seafarers.

NAUTILUS International, the union for maritime professionals, took part in London Pride this weekend with a 20-strong contingent of supporters from across the maritime industry.

This was the third year Nautilus has taken part in London Pride and was the only entity representing the maritime industry.

Nautilus marched in the Trade Unions section of the parade alongside Unison and the Train Drivers’ Union.

“Nautilus International is a trade union for everyone regardless of sexuality, race or gender, and taking part in London Pride shows that,” strategic organiser Danny McGowan, who organised the union’s presence said.

Nautilus International’s council member Ross Cleland said that it was important to show support from the maritime industry at Pride, as LGBT+ seafarers often still lack official support structures within the industry.

Many of the seafarers were taking part in London Pride for the first time, and represented UK shipping companies BP Shipping, Wightlink, as well as Maersk, among others.

Some 30,000 people took part in the parade on Saturday, which set off from Portland Place at midday, moving down Oxford Circus, along Regent Street to Piccadilly Circus, Lower Regent Street, Pall Mall and then passing Trafalgar Square before finishing on Whitehall. As many at 1m people watched the parade, according to Pride In London.

“The parade provides a platform for every part of London’s LGBT+ community to raise awareness of LGBT+ issues and campaign for the freedoms that will allow us to live our lives on a genuinely equal footing,” Pride In London said on its website.