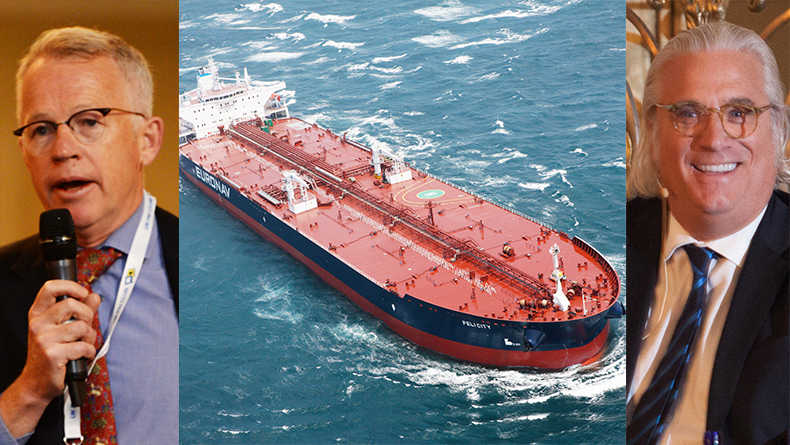 Bigger is not just better, it's necessary for survival according to shipping's consolidation crusaders

'There's a long way to go on sexual harassment'

Autonomy - walk before you run

Grains trades emerge as a top performer for bulker owners

EURONAV ends 2017 by becoming the owner of the world's largest crude tanker fleet, a move designed to further enhance its comprehensive stature among customers and investors in the age of shipping consolidations.

After announcing its all-share deal worth $490m to acquire the whole of Gener8 Maritime, the Belgium-based tanker giant told Lloyd's List: "It's our feeling that this is a trend - we feel we can see the future and where this trend is going."

Bigger is not just better, it's necessary for survival according to shipping's consolidation crusaders

WHILE a tone of cautious optimism has apparently settled as the dominant boardroom narrative heading into the New Year, we would do well to remember that 2017 has been a year of refinancing, rescheduling, restructurings and insolvencies, writes Richard Meade.

Consolidation makes sense for Euronav and Gener8 - their investors and customers demand it - but more broadly, consolidation is necessary in a tanker sector that has been roiled by energy markets in transition, over-supply of tonnage and a desperate need to find finance for growth amid dwindling supplies.

INTERNATIONAL Seaways has said it has agreed to buy six very large crude carriers for $434m from the company being created by the merger of Euronav and Gener8.

"We are pleased to have entered into this compelling en bloc transaction that positions the company to further increase its earnings power and industry leadership," chief executive Lois Zabrocky said.

What is in it for their shareholders? The Big Five US-listed tanker companies will soon be the Big Four, assuming the merger between Euronav and Gener8 goes through, with a little help from hard-charging International Seaways. All eyes are now on DHT and Frontline for their next move.

'There's a long way to go on sexual harassment'

THE first-person accounts of sexual harassment and misogyny in the shipping industry we have recently heard are heart-breaking, writes Julie Lithgow.

Not because the incidents are shocking (they're not a surprise) but because almost every woman I have worked with in shipping can offer similar stories.

Autonomy - walk before you run

THE debate about maritime autonomy, which is beginning to resemble the endless circular arguments over Brexit, has at least reactivated a few jokes that I thought had died 40 years ago, writes Michael Grey.

The one about an "autonomous ship having to appoint both a master and a ship's dog to stay on the right side of international maritime law" is surely a recycled saying that was doing the rounds in the final days of the Tyneside tramp ship.

CHINA has lifted restrictions on coal imports, but the benefits for freight markets may be less than expected.

The National Development and Reform Commission, China's top economic planning body, delivered a verbal message to temporarily remove restrictions on coal imports, according to a report by Caijing Magazine, citing an anonymous source familiar with the matter.

Grains trades emerge as a top performer for bulker owners

GRAINS trades are under the spotlight in the dry bulk spectrum after almost a decade of steady, healthy growth, attracting an increasing number of high-profile owners, even as climate change and the vessel costs related to stricter standards of hygiene pose trading risks.

Although iron ore and coal are the main areas for bulker employment, the solid grains trade has become an important source of revenue for shipowners and operators, especially for panamaxes on long-haul routes and geared vessels in regional shipments.

THE amount of capital needed to finance current newbuilding orders substantially overshadows the total market capitalisation of all the listed shipping firms, according to the Asian transportation consultancy Crucial Perspective.

Although the global newbuilding orderbook has dropped to a record low of 10% amid calls for more disciplined ordering by shipowners, an estimated $231bn is still needed to finance orders - whereas total market capitalisation currently stands at $191bn, it said.

SOUTH Korea's Hyundai Merchant Marine intends to order a series of 22,000 teu mega containerships in order to raise its competitiveness in the global market by boosting tonnage to more than 1m teu.

SHIP manning expenses are unlikely to see an uptick anytime soon, despite the market recovery witnessed so far as shipowners and operators continue to face financial headwinds. What is more, wage rates have been affected as more personnel enter the industry to alleviate an officer shortfall, said shipping consultancy Drewry in its Manning 2017 report.

SOUTH Korea's Daewoo Shipbuilding & Marine Engineering has said it has reached a provisional agreement with union members over a wage demand.