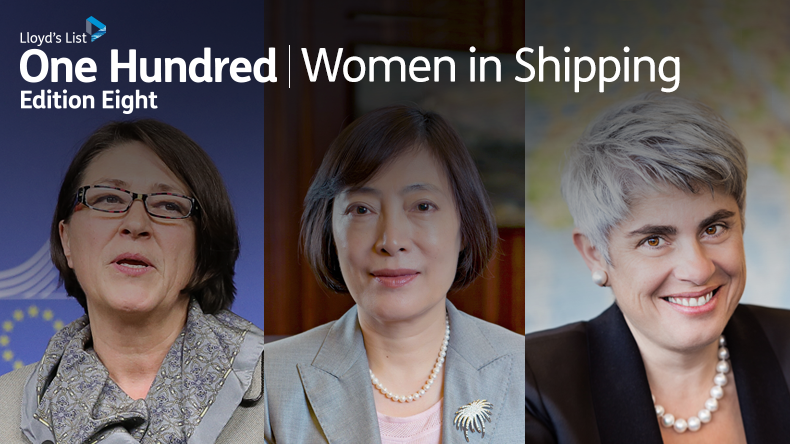 SHE may keep a low-profile, but as the boss of the leading Chinese policy lender in shipping and shipbuilding, Hu Xiaolian is the driving force behind many state-backed initiatives.

Indeed, the bank reckoned it had issued more than $15.1bn in ship loans since the beginning of 2016, which supported the construction of 688 vessels and offshore projects in China.

VIOLETA Bulc has the unenviable position of being the ringmaster in chief of the maritime related factions at the European Union’s tripartite institutions — the council, the parliament and the commission, which have become more vocal, and less patient over environmental regulations, specifically carbon reduction, post-Paris Agreement in 2012.

On top of that, she is the conduit between European regulators and global maritime regulator, the International Maritime Organization — a tricky position given the challenges it faces reaching a global consensus on decarbonisation.

So far, Ms Bulc has backed an international solution, but has also urged the IMO to deliver. This may not be the last time the IMO receives a nod of approval combined with an indirect push from the commission

BACK in expansionist mode after a rocky year, as of the end of 2017 Navios Group has a total fleet of up to 195 vessels — 55 tankers, 39 container vessels and 101 dry bulkers, including 26 bulkers on long-term charters.

Dry bulk remains Navios’ core strength under Ms Frangou’s leadership and positioning itself for the anticipated dry bulk recovery will be a key to the group’s fortunes over the next few years.

Navios is a highly diversified public shipping group with a profile that includes the South American river transport, port and cabotage business of the logistics arm alongside its mainstream oceangoing shipowning activities across the dry bulk, tanker and container sectors.

Ms Frangou remains unchallenged in her position as standout leader of the shipowning / operating business.

A delicate balancing act tests Kristin Holth who has to help clients access more diversified sources of investment while her bank slowly pulls back from from ship lending.

She has predicted big changes to come in bank financing, suggesting that the days of banks lending 70% of industry capital (as they have done for the past 10 years) will end soon, with a new norm of 30% likely five years from now.

For now, DNB is still the largest lender in shipping. However, a recent announcement that $10bn, or 40%, of its shipping and oil-related loans will be transferred to a separate “non-core” division could spell the beginning of the end of that dominance.

WHILE 2017 may have been a comparatively quiet year for ExxonMobil’s vessel chartering arm SeaRiver Maritime, its wider activities point to more seaborne shipping in the long run.

The energy firm is buying shale production and logistics assets in the Permian Basin, Texas, including a 100,000 barrels-per-day terminal in Wink that can transport upstream production to Gulf Coast refineries and marine export terminals.

This year, it completed the acquisition of Jurong Aromatics production facilities, bringing its aromatics output to more than 3.5m tonnes per year in Singapore.

Known for her acute sense of timing, she has a keen sense of when to strike, making decisions just at the right time. Her stand-out deal for 2017 was the purchase of Quintana Shipping’s entire fleet of 14 vessels in exchange for shares. A deal that improved Golden Ocean’s market capitalisation and added to its already large fleet.

That hard work has paid off. The company posted its first profit for a number of years in 2017 and will consider a dividend when it has free cashflow.

THE incoming chief executive of BP’s shipping arm takes the role at a time when the energy major is consolidating its power in the spot charter markets. It fixed 444 clean tankers to carry 20.2m tonnes of petroleum products in the first 10 months of 2017, up from 351 ships for 15.4m tonnes in the same period of 2016, data from Clarksons showed.

Ms Howle will also oversee BP’s operated fleet, whose renewal programme is almost complete. With a strong background in petroleum trading and experience in finance and operations, Ms Howle has held the positions of trading manager for global liquefied petroleum gas and chemicals and head of operations for the eastern hemisphere business in Singapore.

Her most immediate priority will no doubt remain the mitigation of environmental impact of shipping, given the upcoming regulations on ballast water treatment and bunker sulphur.

CEFOR is the main representative body for the largest single marine insurance market outside London and as such it holds a considerable sway.

Perhaps best known for its statistical accounting of the industry, Cefor keeps a keen eye on claims trends, including insured values and reported premiums.

Ms Hammer also defended Nordic insurers’ role in salvage operations this year, as the use of Lloyd’s Open Form contract continues to evolve.

Ms Hammer chairs the political forum at the International Union of Marine Insurance, giving her a formidable degree of influence in the niche.

SABRINA Chao heads up the family shipping dynasty first launched by her grandfather Tsong-Yea Chao, which controls a fleet of 17 dry bulkers and five tankers. Having taken over the company in 2016, she is regarded as a strong-minded and innovative leader. One of her first moves was to supplement the top management with more Chinese staff.

For the past two years, Ms Chao was chairman of the Hong Kong Shipowners’ Association. More change was made when Arthur Bowring, the group’s ex-managing director, made his way for new blood after 20 years of service. HKSOA also launched a more informative new website.

DESPINA Theodosiou has been described as a ‘problem-solver’ with a sharp mind. She heads the Women in Shipping and Transport Association networking group. This has matured into a targeted global presence and is growing in clout.

Ms Theodosiou takes the helm of Wista during a time of fast-moving social change in which sexual harassment at work is coming increasingly under the spotlight in the wake of scandals in Hollywood and elsewhere. Wista has a chance to really stand up and be counted on that issue; let us see what it makes of it.

Ms Theodosiou is joint chief executive of Tototheo Maritime, a technology and satellite communications business based in Cyprus. She is also a board member of the Cyprus Shipping Chamber and chair of its development committee.