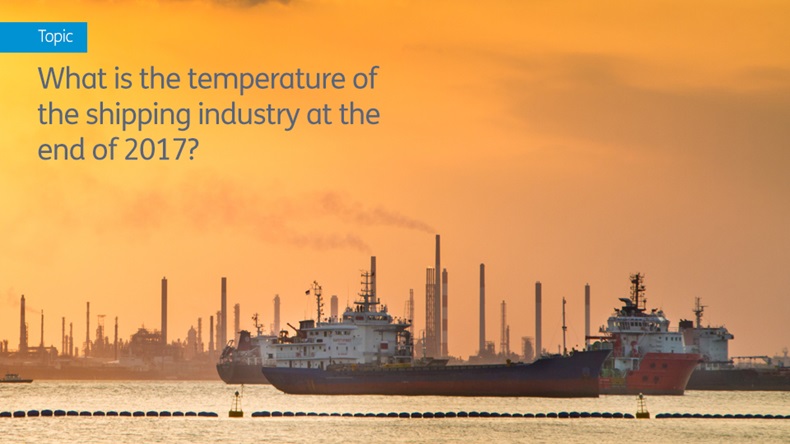 What is the temperature of the shipping industry at the end of 2017?

THE REVOLUTION about to sweep over the maritime industry will not be primarily a consequence of new technology, believes Transas CEO Frank Coles, rather it will be driven by a change of attitude at every level from senior management through to the newest recruit. The opportunities presented by disruption will be lost if maritime persists in tweaking the current business model, and in simply applying a thin veneer of digital to an existing analogue process and calling it digitalisation. 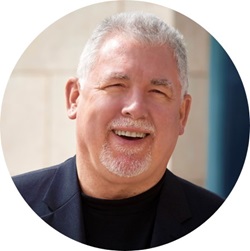 Transas CEO, Frank Coles
Mr Coles was speaking alongside Lloyd’s List managing editor Richard Meade at a Lloyd’s List-hosted webinar. Both speakers looked beyond the immediate issues that dominate the maritime industry at the beginning of 2020 – including ballast water treatment, the global sulphur cap, and shipyard overcapacity – towards the characteristics of a ‘new normal’ that will emerge over the next decade. There was agreement that ship owners have been complacent in their attitude to change, however Mr Coles was concerned by owners’ attachment to business as usual. 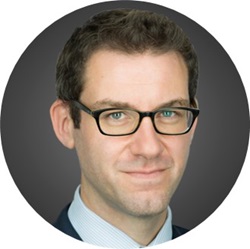 Lloyd’s List managing editor, Richard Meade
“Shipping as it exists today won’t be the way it will exist tomorrow,” he insisted. “Logistics and connectivity will be controlled by cargo owners and e-commerce businesses that think differently.” The container sector went from zero to hero in less than 10 years, Mr Coles added, “so there’s reason to believe the traditional shipping business model might disappear by 2028.”

Richard Meade anticipated a “seismic transition” that will feature not only artificial intelligence, robotics, and 3D printing but also regulatory pressures coming from consumers. Transition has begun, and it has begun far outside the confines of the maritime sector. “Ship owners and managers are hedging their bets: they know something is happening but they don’t know how to react.” 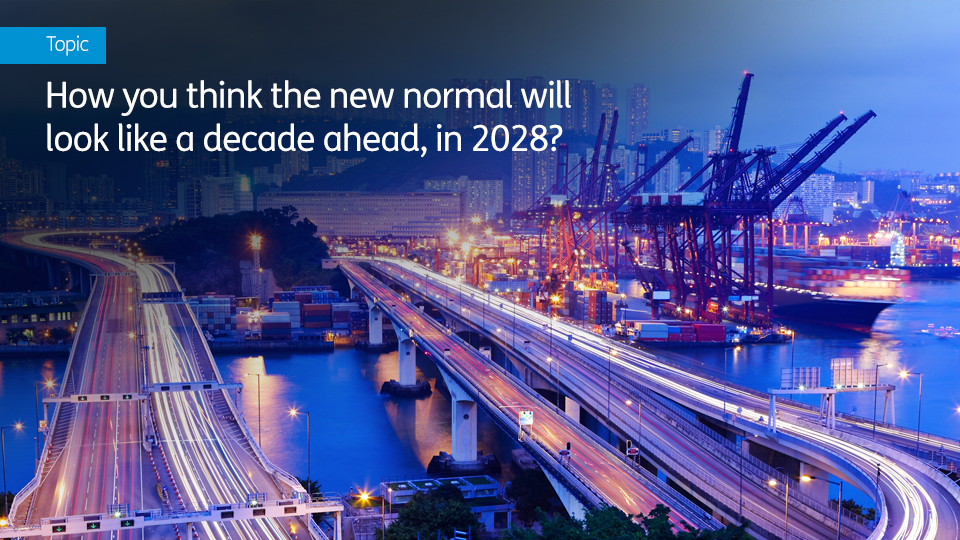 This disruption will take shape in 2018 as trade is influenced by rail links between Asia and Europe and as speculative ordering in the hope of catching a market upturn is replaced by global commodity players build specific ships to serve specific trades. “Cargo owners will demand a different business model,” said Mr Coles, “and if established ship owners can’t comply, new owners and managers will be created.”

Whether disruption would be sparked in 2018 or become established over the coming year was uncertain. Mr Meade urged caution. “We have to be realistic about the time scale. Containerisation was the last revolution for shipping, and it was a gradual shift as competing technologies started but failed. That revolution took 10 years to settle.” The upcoming digital transformation will be swifter, he said, and will be marked by a shift in attitude to data and management systems rather than just new technology. Be assured, ship owners “will not be the Uber of shipping, they will be the Uber drivers.”

“The general trend will be an explosion of innovation and a meltdown in communication costs”
Transas CEO, Frank Coles

Disruption has begun slowly, Mr Coles agreed, however the pace is picking up. “The general trend will be an explosion of innovation, a commoditisation of shipyards, and a meltdown in communication costs.” The signs of disruption are already in evidence. “Steps taken by Rolls-Royce Marine, Wärtsilä, ABB Marine, Kongsberg, and Transas all relate to disruption. But until ship owners and managers run their companies differently, they will be struggling with technological change.”

There are signs of confusion and not enough clarity about how shipping businesses can stay on board. Richard Meade focused on the difficult change in mindset from current short-termism to a medium-term outlook. “Ship owners need sufficiently forward-thinking investors and backers to sustain the existing business model when the new business model is just over the horizon.”

This is likely to bring about a two-tier structure to the industry depending on which business model is in the ascendant. “Look at BHP, Cargill, Rio Tinto, Alibaba, and Amazon,” said Mr Coles. “These companies will all build green ships that are fit for purpose for their particular trade. They will deliver what the cargo owner wants.”

The issue of cyber security, often regarded as the Achilles’ heel of digitalisation, is not the weakness many people think, the speakers agreed. “Cyber security is not about passwords; it’s more about a change of business model, a change to the processes within the company,” Frank Coles believed.

However, there was less clarity about whether businesses that adopt the new business models, new attitudes, and new technologies would gain an advantage over their competitors or lose out. Richard Meade pointed out that nowhere have early adopters stolen a march on their rivals, however Frank Coles countered that “early adopters won’t be at a disadvantage if they are building ships in partnership with cargo providers who need a specific ship.” External interests will drive shipping: early movers could do worse than hitch a ride.

The coming year will see executives preparing a more robust cyber security strategy, consolidation within the communications market as pricing reacts to pressure. Aviation pays only about one-fiftieth of what maritime pays for communications, observed Mr Coles. “There is three times more communications capacity as is needed. It’s an enabler, not the solution, so it’s simply a question of the ship owner being given the level of service he needs at a price he can afford.” 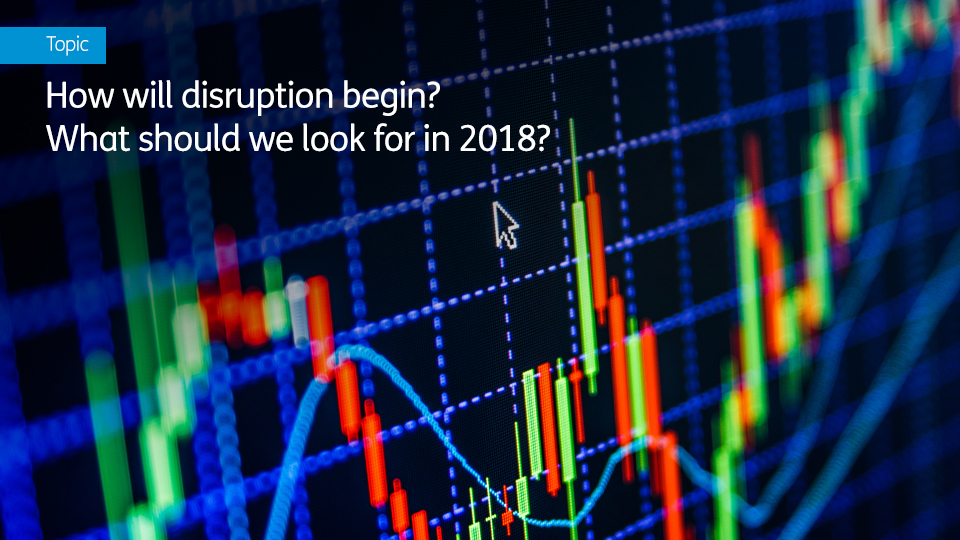 Insurers are feeling their way into this disruption, Mr Meade said, “moving towards their own revolution, slowly digitalising and innovating, and trying to modernise what is an extremely traditional business model.” Seafarer training is beginning to respond, using augmented reality to transform training methods. “There will soon be the ability to come off a shift, put on a virtual reality headset and do the training for the day,” Mr Coles predicted. It will be an easier and much more flexible way to train seafarers: characterised by “anytime, anywhere, anyhow”.

And it’s these transformations – to the business model, to the working environment, to training, and to career prospects – that will keep shipping attractive to the next generation. “Shipping will become a hotbed of innovation, logistics, and trade that will prove attractive to mathematicians, data scientists, and robotics experts as well as to traditional shipping professionals,” Richard Meade believed. Disruption will provide a much-needed fresh perspective.

Mr Coles warned that the next generation would not be interested in old-fashioned management structures, bureaucracy, or paper-pushing. “The current business models no longer appeal. But as we move into a disruptive world, millennials who have grown up in a games environment, connected and interconnected, who care passionately about the environment, will see shipping as very interesting.”

The coming year must see a change to the way the concept of transformation is understood. Simply putting data onto the blockchain isn’t transformational. “Until we change out attitude to the way a ship is managed, an office is managed, and the processes are managed, there won’t be transformation,” Mr Coles stated. “Cyber security isn’t solved by class societies sending out brochures, or software companies releasing new guidance. It will only be solved when everyone from the CEO to a member of the ship’s crew understands the behaviour and processes required to transition to a fresh mindset.”

“Shipping will continue to be held back until there’s a complete visualisation of what digitalisation is,” the speakers agreed. If this happens in the next year, 2018 could prove to be the start of the next maritime revolution.