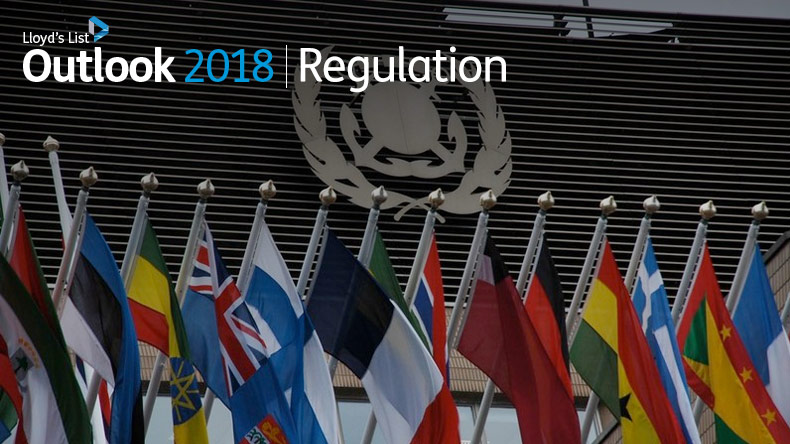 Outlook 2018: Regulation: A turning point in the environment debate

Salvage Union calls for mandatory reporting of LOF side agreement

China's Belt and Road is about investment in people

Korea's Sungdong Shipbuilding in talks for up to 12 orders

A turning point in the environment debate

THE shipping industry will have to clean up its act in 2018 as it enters a new phase of transparency, augmented responsibilities and increased scrutiny by regulatory authorities.

Next year will mark the introductory stages of various obligations for shipowners, bringing home the fact that things are really changing in terms of environmental and data regulations. These are no longer conceptual discussions about changes happening in the future.

While regulators will have their work cut out for them in enforcement, compliance with emission reporting and controls will certainly be the dominant regulatory challenge for owners looking ahead.

The party is over for the polluters, so to speak.

The International Maritime Organization will adopt a five-year strategy on the industry's reduction of greenhouse gas emissions in April 2018 during its Marine Environment Protection Committee 72.

The strategy, which will be revised in 2023 in favour of a final version, will directly affect every part of the maritime sector.
This will include an ambition for GHG emission levels, which could translate into CO2 reduction rates, to be achieved by a given date - likely to be 2050. The exact meaning of the level of ambition is still up for debate, however, and the IMO will have to decide in April 2018.

A set of mitigation measures the industry will have to apply to meet this level of ambition will also be included in the strategy. With regulators also expected to agree on the timelines of short-, medium- and long-term measures, the shipping industry could be looking at the adoption of new short-term measures in 2018. That is, of course, if regulators manage to agree on both the strategy and new measures at the same time.

Emission controls will ultimately mean a monumental shift in daily vessel operations. It may not be all bad news for the industry; for example, slow steaming can reduce emissions and overcapacity at the same time.

Moreover, regulators could learn from some of the shortcomings of other recent environmental regulation.

In July, the application of the Ballast Water Management Convention on the existing fleet was pushed back for two years, with many of the arguments in favour of the delay claiming that the existing technology was insufficient.

In a similar vein, the IMO agreed on a 2020 sulphur cap, leaving owners and refineries wondering how to best deal with the restrictions amid limited alternative fuel availability and the high cost of investment in liquefied natural gas-powered engines.

A clear IMO target on decarbonisation rates and dates, taking into account how the industry is evolving, could instead signal to potential investors that shipping is committed to a zero carbon future, providing a better business environment for the relevant technologies to be developed.

Early in November this year, the shipping industry learnt that European Union negotiators agreed to add shipping to the bloc's revised Emissions Trading System text, but that regional action will potentially only be taken from 2023 onwards while the European Commission keeps tabs on the IMO's progress.

The industry, though, is not completely off the hook. Under EU rules, as of January 2018, owners using EU ports will have to begin monitoring their vessels' emission levels and fuel consumption. They will begin submitting the data to the commission from April 30, 2019 onwards, on an annual basis.

European regulators are not the only ones turning the screws on vessel operations. Following the introduction of the EU Monitoring Reporting and Verification period, the IMO's emission Data Collection System comes into effect on March 1, 2018.

The IMO DCS is generally seen as less stringent than the EU MRV. Among the main differences, is that the commission requires emissions data per voyage, whereas the IMO records total fuel, time and distance covered.

Until the EU aligns its system to the IMO's, shipowners will have to report to two separate authorities and comply with two different set of demands.

The massive growth of personal data and its use have yet to be addressed from a regulatory perspective. But that will soon change.
Beginning on May 25, 2018, shipping companies that are either based in Europe, with EU-flagged vessels, or employ EU crew, will have to abide by the EU's General Data Protection Regulation.

Under the GDPR, employees have control over data that companies have on them and how they use it. The regulation requires that employees give their consent before employers collect data that affects them, and can request to see how the data has been compiled.

This has immediate impacts on crewing managers and shipping agencies, and is not something that owners can afford to fiddle with; non-compliance could result in fines of up to 4% of annual global turnover or €20m ($23.6m), whichever is greater.

The continual transition to onboard digital systems will also continue in 2018.

Non-tanker cargoships between 10,000 gt and 20,000 gt constructed before July 1, 2013 must have an Electronic Chart Display and Information System by the first safety survey conducted on or after July 1, 2018.

The Ecdis expansion comes in place as the IMO launches a coping exercise, from 2018 to the mid-2020s, to potentially develop regulations for autonomous vessels.

SPOT charter rates for liquefied natural gas carriers have risen to their highest in three years, boosted by rising US exports, strong Asian demand and general tightness of tonnage.

DNV GL has retained the top spot in our annual ranking of classification societies thanks to an increase in gross tonnage, fending off tight competition from ClassNK.

Under the leadership of maritime chief executive Knut Ørbeck-Nilssen, the society showed upremacy in the general cargo fleet and a strong presence elsewhere.

Sign up to our daily email to receive your Top 100 updates.

Salvage Union calls for mandatory reporting of LOF side agreements

THE International Salvage Union has called for mandatory reporting of all Lloyd's Open Form 'side agreements'.

Side agreements, or 'side letters', typically seek to cap some payments for an LOF agreement,  for example a cap on salved values or an agreement to calculate the salvage award based on day rates for equipment.

China's Belt and Road is about investment in people

IT IS easy to envisage China's ambitious Belt and Road Initiative as an aggregation of massive infrastructure projects. The reality, however, is far more complex than that.

China is exporting its influence under the BRI through various aspects, one of which is human capital.

THE shipping community is no stranger to hedging tools. It has forward freight agreements after all, which allow shipowners, operators and charterers to take positions on freight rates in the future. FFA values provide a guide when negotiating period charters, mitigating the risks associated with it.

Lately, bunker hedging has come into the spotlight ahead of the new 0.5% sulphur cap on bunker fuel that is coming in from 2020. Analysts are predicting exciting times ahead as a lot of discussion will be had around the topic.

CONTAINER lines have all published their third-quarter reports for 2017, giving us the opportunity to review how the 2017 peak season affected carrier operational returns.

SECONDHAND sales in the dry bulk market have fallen after the recent price rise, while newbuilding orders have taken off amid renewed optimism following a surge in freight rates.

With 40% of its current electricity production coming from 59 coal-fired power plants, South Korea is the world's fifth-biggest thermal coal importer.

FRENCH container carrier CMA CGM signed a 10-year supply agreement with Total that will see the oil major provide 300,000 tonnes of LNG from 2020.

TAX changes passed in the US Senate this weekend will have the effect of reducing essential tax dollars that fund infrastructure investments including those at sea ports, according to the American Association of Port Authorities.

Korea's Sungdong Shipbuilding in talks for up to 12 orders

SOUTH Korea's Sungdong Shipbuilding & Marine Engineering rejects a media report claiming its creditors have stopped the shipbuilder from signing letters of intent for a total of 12 vessel orders.

AUSTRALIA and the United Arab Emirates elevated their role within the International Maritime Organization's executive arm, entering into Category B of the IMO Council at the expense of Argentina and Bangladesh.

NEW York-listed Nordic American Tankers made an agreement to sell three suezmax tanker newbuildings to Ocean Yield for $129.6m or $43.2m per ship.

NASDAQ-listed Diana Containerships has secured a roughly 64% increase in its charter agreement with Wan Hai Lines (Singapore) for a post-panamax boxship as the sector sees a recovery on the back of resurgent growth in global trade.