Winners include Radhika Menon, who was involved in a daring rescue in the Bay of Bengal, and Tamer Masoud, who has been key in driving Fujairah’s rise as a global bunkering hub 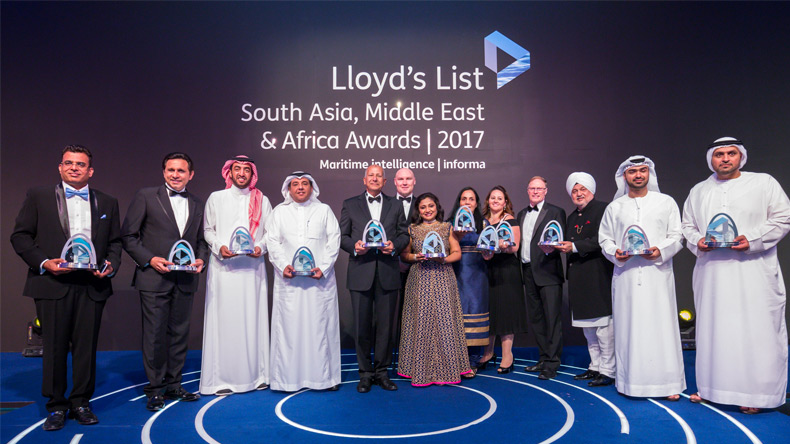 THE winners of the 2017 Lloyd’s List South Asia, Middle East and Africa Awards have been announced, with Radhika Menon named as the first woman to clinch the coveted Seafarer award.

Capt Menon was recognised not only for leading the way for women seafarers in India, where she was the country’s first female radio officer and master mariner, but also for exceptional bravery in saving the lives of seven fishermen from a sinking boat in the Bay of Bengal amid lashing winds and heavy swells in heavy rain.

More than 300 guests and senior executives attended the ceremony at the Palazzo Versace Hotel in Dubai on Tuesday evening.

The event also recognised Tamer Masoud for his contribution to the development of the Port of Fujairah with the Outstanding Achievement Award.

For over 25 years, Capt Masoud has been closely involved in the rapid expansion of the port, its oil and dry bulk terminals, its fleet of harbour tugs, and the offshore anchorage area. With 5,000 ships calls annually, Fujairah now ranks as the world’s second-biggest bunkering port, after Singapore.

Accepting his award, Capt Masoud said: “I have always worked with total dedication and professionalism, and I consider myself lucky to see the fruits of my hard work within Port of Fujairah.'” He said he shared his success with “an astonishing team which has worked together really hard to develop new parameters of success in the maritime industry”.

Among other winners was Drydocks World Dubai, which took the Hutchison Ports Environment Award and the Safety Award for its Zero Harm programme, which applies to the environment as well as people, and with detailed metrics to show what has been achieved in terms of waste recycling, spill prevention, and designed to ensure all personnel are safe in a potentially hazardous working environment.

Another winner was Bahri, which received the Ship Operator Award for the way it is developing across several sectors, from oil to dry bulk to logistics services.

The Saudi Arabian company also won the Lloyd’s List Innovation Award for using Big Data through its BRISO programme to improve operational efficiencies and savings of $71m since inception in 2015.

Jawarharlal Nehru Port Trust took the Port Operator Award, impressing the judges with increased volumes despite considerable challenges and keeping the port congestion-free through initiatives such as improved infrastructure and a move from manual to electronic processes.

“In a world of uncertainty, constant change, and fear of what might be, shipping must continue to provide a trade lifeline to regions far to the east, west and north,'” Lloyd's List chief correspondent Richard Clayton said. “That trade lifeline depends on innovation, best practice, and the determination to get the best job done.”

The Topaz Excellence in Logistics Award

Sponsored by: Topaz Energy and Marine

Seafarer of the Year

The Next Generation Shipping Award