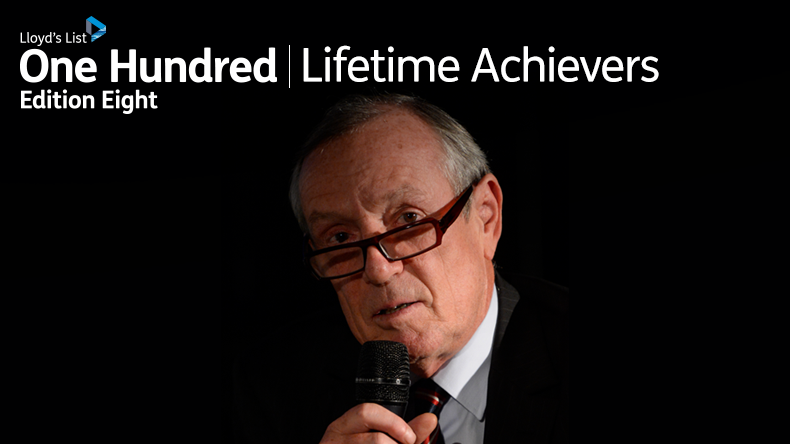 FRANCIS Vallat worked with the Dutch company Van Ommeren for 27 years, rising to chairman and chief executive of Van Ommeren Tankers and chairman of Van Ommeren Transport. It was during this time that he joined the board of the French Shipowners’ Association.

He represented France on the European Maritime Safety Agency from 2002-2012, acting as chairman in 2005. Also in 2005, he co-founded the Cluster Maritime Français, gathering more than 400 companies and professional federations, and followed this by helping to set up the European Network of Maritime Clusters.

His contribution to maritime safety, quality, and professionalism is unmatched across Europe. In his 70th year, he was appointed president of the French arm of SOS Mediterranée, set up to alleviate the suffering of migrants leaving Libya in leaky boats.

KISHORE Rajvanshy sailed deepsea as an engineer with Shipping Corp of India. He came ashore to a position of superintendent with a Hong Kong shipmanager, where he was promoted to director and general manager.

In November 1994, he founded Fleet Management with a single ship. Twenty-three years later, the business has grown to encompass a diversified fleet under management of more than 450 vessels valued at $15bn. This was achieved without mergers or acquisitions, but through old-fashioned customer relationships.

Fleet Management employs 18,000 seafarers and about 800 people ashore. Mr Rajvanshy’s vision for both his company and for shipmanagement as a profession is world-class.

03 / Jeffrey Lantz, director, commercial regulations and standards for the US Coast Guard

JEFFREY Lantz spent many years on active duty with the US Coast Guard before retiring in 2001 at the rank of Captain.

Aside from serving the US domestically, he has been a prominent member of the international maritime community. Mr Lantz heads the US delegation to the International Maritime Organization’s Marine Environment Protection Committee, where he is tasked with representing US policy on various regulatory fronts.

His duties and commitments at the IMO extend beyond those of promoting US interests. He is the chairman of the IMO’s council and was a candidate to become the organisation’s secretary-general in 2012.

Well known for his diplomatic and negotiating tact, Mr Lantz has played an important role in setting IMO policy on a number of matters including climate change, ballast water management and ship recycling.

PAVLOS Ioannidis is best known for his long and successful career with the Onassis Group. But he was also the first person to apply aviation training methods and culture to shipping.

This not only benefited the Olympic fleet but also, through Mr Ioannidis’ activities on the boards of the Union of Greek Shipowners and Helempa, the Greek shipping industry at large.

AFTER 12 years at sea with an Egyptian company and two as master of a special support vessel, Captain Tamer Masoud spent four years as a harbour pilot in Fujairah before stepping up to Port of Fujairah harbourmaster in 1992.

Over 25 years, he has been closely involved in the rapid expansion of the port, its oil and dry bulk terminals, its fleet of harbour tugs, and the offshore anchorage area.

While 5,000 ships call at the port each year, three times that number call at the offshore anchorage to load bunkers, transfer crew, take on spare parts, and await orders to lift cargo in the Gulf region. Fujairah is the world’s second-largest bunker port, after Singapore.