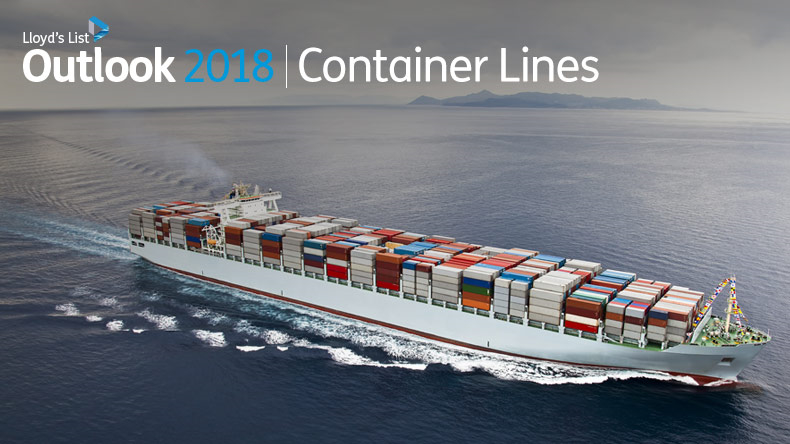 The man behind Bocomm Leasing

On the bus ride to digital disruption

Adoption of LNG as a marine fuel slower than anticipated, says DNV GL

CONTAINER shipping faces another year of upheavals as mergers and acquisitions continue to reshape the industry.

But industry conditions are undoubtedly improving.

Fundamentals are the best for several years, with cargo volumes expanding at a respectable pace, both in the east-west and north-south trades. The mature markets of Europe and North America are posting healthy growth figures, while emerging markets such as Brazil, West Africa, the Middle East and Russia are also picking up, helped in part by higher oil prices.

At the same time, fleet growth is back under control, despite some ordering activity toward the end of 2017.

While freight rates remain a little volatile, there has been no sign of another price war, just the occasional speed bump, as Maersk Line likes to phrase it.

But it will be the inauguration of a new Japanese line and the takeover of two household names that are likely to be watched most closely as boxship operators consolidate into just a handful of genuinely global operators.

Ocean Network Express, the new line being formed from the container shipping divisions of Nippon Yusen Kaisha, Mitsui OSK Lines and Kawasaki Kisen Kaisha, will start services on April 1, at the beginning of the new shipping season 2018.

That will be exactly a year after the Ocean Alliance of CMA CGM, Cosco Shipping, Orient Overseas Container Line and Evergreen Line introduced joint services. So too did The Alliance of Hapag-Lloyd, the three Japanese carriers and Yang Ming Marine Transport.

The phasing in of those new service networks went relatively well, with little of the disruption some observers feared.

The arrival of ONE, which will rank number six in the world, should go relatively smoothly, given that the three carriers are already members of the same vessel-sharing agreement.

But that will not be the only major event of 2018. Maersk will have completed the takeover of Hamburg Süd, while Cosco Shipping is in the process of buying OOCL.

Both new owners have promised to retain the brands and maintain separate business units of two of the most respected lines in the industry, but their loss of independence will still have consequences for both cargo interests and business partners.

By the end of the current round of consolidation, there will to all intents and purposes only be six or seven truly global carriers. This unprecedented concentration follows years of price wars and financial losses. This was perhaps best illustrated by Hanjin Shipping’s bankruptcy in 2016, which forced the others to team up. Even the top two, Maersk and Mediterranean Shipping Co, had little choice but to form an alliance.

The question is whether the survivors of this punishing shake-up will be able to regain control of their prices and establish an industry that can deliver solid profits.

As 2017 draws to a close, there are some promising signs, with freight rates in better shape as global demand growth picks up.

What has also helped was a suspension of newbuilding activity, with virtually no new orders placed for container ships during 2016 and much of 2017.

The 2017 figure was also running at a very low level, with the orderbook down to about 13% of the existing fleet against as much as 60% a few years back. Then suddenly, both CMA CGM and MSC signed contracts for 22,000 teu ships, the largest yet. The two deals together are probably worth close to $3bn.

Each has a good reason to order, with CMA CGM well behind its competitors in terms of ultra large boxships in its fleet, and MSC continuing to expand through fleet acquisitions rather than corporate takeovers.

The question, though, is whether those orders will trigger another round of building activity that will wreck the fragile recovery, as has happened so many times in the past, or if these two orders prove to be the exception.

Either way, a large number of ships of 18,000 teu or more are still in the pipeline and heading for the Asia-Europe trade lines, with the inevitable cascade effect on other routes.

At the beginning of 2017, there were 47 ships of this size or larger in service. By the end of the year, that figure will reach about 70, and increase to almost 100 by late 2018. Soon after, the CMA CGM and MSC ships will start to be delivered.

It is not just supply and demand trends that will be monitored in boardrooms. The top three lines, all European, now face a very serious challenge from China as Cosco Shipping buys OOCL to muscle into the third slot in terms of fleet capacity. With the Cosco group also buying terminals around the world and developing new supply chains, others will have to respond.

Maersk is doing so by bringing its container shipping, ports and terminals operations together into a single business unit in order to fully exploit the synergies between the different activities.

So the shake-out of the past two or three years is far from over, with the battle lines between Europe and Asia now being drawn up.

That could be the next big confrontation that has the potential to send container shipping spinning off in another direction.

CMA CGM founder and chairman Jacques Saadé is finally stepping down from his role at the top of the company and appointing his son Rodolphe to the newly reformed role of chairman and chief executive.

“The group is strong. I am very confident in its future. That is why I have decided to entrust to Rodolphe the chairmanship of the group in addition to his current responsibilities as CEO,” Mr Saadé said. News of the long-anticipated generational shift came on Friday evening, just as the company released its third-quarter results showing a marked improvement over the corresponding period last year. Volumes were up 11% and revenues up by more than 25%, leading to a net income of $323m for the quarter, reversing a loss of $268m in the third quarter of last year.

The man behind Bocomm Leasing

In an upbeat assessment, he predicts that the trading of vessel assets between leasing houses will become more prevalent and new players will enter the market, while lessors will have to get used to steady but lower margins, with freight markets becoming less volatile.

“We’ll just need to get used to more reasonable returns in the long term.”

TWO more British P&I clubs have confirmed in recent days they have plans to set up subsidiaries in EU countries, in a bid to circumvent possible loss of ‘passporting’ rights in the wake of Brexit.

The UK P&I Club said it would set up shop in the Netherlands, while Standard announced that it had opted for Dublin, joining North, which previously said it was heading for the Irish capital.

On the bus ride to digital disruption

Shipping recognises that change is inevitable and will happen swiftly because things happen more rapidly in a digital world.

But seeing the disruption through to its end is likely to be a non-stop, one-way ticket ? with some bumps in the road.

VITOL has named Christopher Kernon as its new head of shipping to succeed Paul Thomas, who is taking on another role within the commodities trading house.

THE Hong Kong Shipowners Association is lobbying the city's government to set up an independent statutory body to head up maritime affairs in the special administrative region and to boost its status as a global maritime centre.

ANTWERP Port Authority and Belgium's Federal Participation & Investment Company have bought NxtPort, the company developing a digital data platform for use in the shipping and logistics sectors.

Adoption of LNG as a marine fuel slower than anticipated, says DNV GL

THE adoption of liquefied natural gas as a more environmentally sustainable alternative to fuel oil in powering vessels has taken longer than expected, but with 117 ships already using LNG, DNV GL expects the fleet size to double in the near future.

CANADA has signed a memorandum of understanding with the International Maritime Organization to finance training programmes for seafarers operating vessels in polar regions.

INCHEON-based Inha University will hold a disciplinary committee meeting next month after South Korea's Ministry of Education concluded that its president failed to justify her decision to purchase Hanjin Shipping's corporate bonds.

ONE topic that was hard to avoid during Hong Kong Maritime Week, and related event the Asian Logistics and Maritime Conference, was the future of Hong Kong.