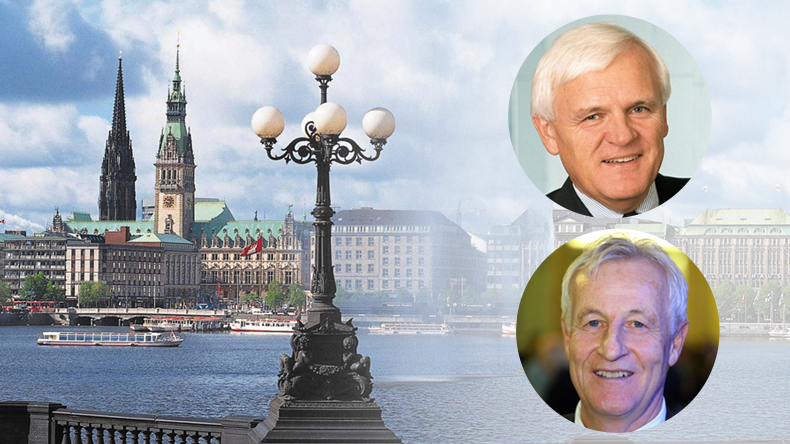 Dry bulk: Why the Year of the Dog can wag its tail

Zim strategy pays off with improved results in third quarter

Second half of 2018 will be turning point for tanker market, says Frontline chief

While the deal would likely have been presented as a merger had it gone ahead, the respective financial positions of the two close friends suggest that what was on offer was by way a rescue.

A SHIPPING shakeout will see the number of operators in Germany shrink from 300-400 to somewhere between 20-40, with even current top 10 players set to vanish, owner Claus-Peter Offen predicts.

Offen — who bills his CPO Holding the strongest boxship outfit in the country, financially speaking — has vowed that he will be among those left standing. What is more, he is going flat out for an international listing in the next few years.

Dry bulk: Why the Year of the Dog can wag its tail

A DELUGE of vessels has meant that the dry bulk shipowners have had to endure years of hardship amid poor freight rates, but a sense of optimism seems to have returned to the segment with the demand for tonnage experiencing a revival.

This newfound hope has been triggered by numerous factors, such as trade in the segment surpassing the global economic growth rate and net fleet growth falling to the lowest levels in the past 13 years. With the Baltic Dry Index close to a three-year high, the owners are betting on further upward momentum.

Call that a trend — if the industry is lucky, 2018 will show better earnings and restore the supply and demand balance in the segment. A Lloyd’s List survey shows the consensus among analysts is for freight rates in 2018 to be well above operating costs.

For the owners who invested in cheaper ships in the last few years, the market is sufficiently ripe for harvesting the benefits of low acquisition costs.

China’s Year of the Dog

But wait — despite the industry’s talk of digitalisation, so much so that BHP (one of the world’s largest charterers) is studying gas-powered autonomous ships, it might serve one better to be a little cautious, or even superstitious, when it comes to China — most importantly because China still remains the deciding factor for the dry bulk market.

Next year, the Year of the Dog according to the Chinese horoscope, can appear to be murky for Chinese demand outlook when taking into account Beijing’s policies to transform China into a low-carbon economy with cleaner fuels, not to mention the curb on steel production from November this year until March 2018.

On paper, those measures are negative for coal and iron ore imports. But they can also point to more demand from China for high-quality imports of those two types of cargoes to feed its gigantic steel industry.

The closure of domestic iron ore and coal mines amid a pollution crackdown in China will require import substitution of high-grade iron ore from Brazil and Australia as well as better quality coal from Australia, the US, South Africa, Colombia and other exporters far from China, Precious Shipping chief executive Khalid Hashim said.

Another key factor adding to the tonne-miles would be the increase in the supply of Brazilian iron ore as Vale’s S11D project is expected to be fully operational in 2018. Additionally, there is also the potential of a restart of the Brazilian Samarco iron ore mine, which was shut by a deadly dam burst in 2015.

The Brazilian miner is seeking permission from Chinese port authorities to allow it to double the amount of iron ore it blends to 46m tonnes in China next year, which clearly shows the growing demand for the longhaul trade. Overall, the tonne-mile demand related to iron ore would be around 8.6bn next year up, from 8.3bn in 2017, Clarksons predicted.

For the long run, President Xi Jinping’s Belt and Road Initiative, which aims to build out infrastructure — new ports, roads, railways, power plants and pipelines — along the old Maritime Silk Road across Asia and Europe, would require huge quantities of cement, steel and wood that Mr Hashim points out would be carried in dry bulk ships.

With the market seemingly poised for further gains as demand is expected to grow by 2%-3% in 2018, the supply side looks even more attractive.

Some analysts even project the fleet to grow by less than 1% in 2018 to around 819m dwt as a wave of scrapping would remove some aged ships.

Banchero Costa Group head of research Ralph Leszczynski expects demolition activity to recover over the next two years on “regulatory pressures and probably a recovery in bunker prices driven by higher crude oil prices, which will put pressure on older, less-fuel efficient ships”. Moreover, newbuilding deliveries should be much fewer in 2018 — about 50% down in dwt terms, Mr Leszczynski estimated.

Additionally, shipping finance — at this stage, and in the near future — plays a critical role in the industry, Karatzas Marine Advisors chief executive Basil Karatzas warned. “Lack of financing keeps the market in control, but any new sources of financing can drive the market out of control and result in a spike in tonnage.”

There remains a lot of idle shipbuilding capacity that begs for new orders, so low offers by shipbuilders plus a hotter freight market with some export credits could lead to a new wave of newbuildings and another phase of an oversupplied market, Mr Karatzas added.

Capesize and newcastlemax vessels are in riskier markets than others as they can be seen as “one trick ponies” that rely heavily on China trades, while the smaller segments will be the catalyst for improved charter rates next year, according to Mr Karatzas. Modern handysize to ultramax vessels offer most flexibility and economics for trading, while panamax tonnage could benefit from grain shipments in existing and new pattern of trades, such as some Atlantic-Southeast Asia movements, he added.

The Lloyd’s List earnings survey provides evidence that the highest growth in freight rates in 2018 would be enjoyed by the panamax segment, whose earnings are expected to rise by 14.9%, followed by supras and handies with an improvement in rates of 11.2% and 10.3% respectively.

Capesizes would show the lowest growth, of 8.4% year on year.

The grain and minor bulk trades, which significantly improved in 2017, will play into the fortunes of the panamax and supramax bulker owners in 2018.

This improvement has been supported by robust demand for grains and soyabeans, as strong population growth and improving living standards across Asia and the Middle East boost food and animal feed requirements that are largely sourced from the Americas, Australia, Ukraine and Russia.

Moreover, grain exports from the US saw spectacular growth of 10% in 2017 on account of strong wheat demand in the Middle East, Africa and Asia, due to US’ pricing competitiveness. This is expected to produce further demand in 2018, impacting the overall tonne-miles positively.

Moreover, the emergence of scrap steel exports from China — with the closure of induction furnace capacity — will open up new trades for handies and supras.

Having been a net importer of steel scrap, China could export 5m-10m tonnes of it next year, Maritime Strategies International analyst Will Fray said.

"Generally sentiment for 2018 is more positive than 2017," chief executive Martin Ackermannn said. He added that market fundamentals will be "tightening by 2%-3%" a year through 2019.

Commercial considerations — not least, price — means the uptake of LNG for ultra large containerships still faces hurdles, according to James Tai, technical director at OOCL, which owns some of the largest boxships in the world.

THERE was a muted welcome to the UK budget from the maritime industry, which said more could have been done.

Zim strategy pays off with improved results in third quarter

ZIM's focus on surviving as an independent niche carrier appears to be paying dividends for the Israel-based line, which reported an adjusted quarterly net profit, turning around a net loss in the same period last year.

A CHINESE engineering vessel sustained a ruptured hull in a collision with a containership in the Bohai Sea about seven miles off Caofeidian port in China.

The Ministry of Ocean and Fisheries says "no significant abuses cases" were found following a review into claims of mistreatment of South Korean males completing their mandatory military service while working as a seafarer.

BW LPG reported a loss in the third quarter, which the gas shipping company described as the most challenging period for the very large gas carrier spot market since 2009.

ANTWERP Port Authority has purchased Nationale Maatschappij der Pijpleidingen (NMP), the operator of a pipeline network, to facilitate the transport of petrochemical products for users of its oil terminals.

SOUTH Korea's shipping industry saw total revenue in 2016 fall to its lowest in a decade amid the collapse of former flagship carrier Hanjin Shipping, according to a report by Statistics Korea.

INVESTMENT in scrubbers is likely to deliver significant payback amid industry-wide complacency about the global sulphur cap of 0.5% on bunker fuels that takes effect in 2020, according to Deutsche Bank Research.

Second half of 2018 will be turning point for tanker market, says Frontline chief

FALLING global crude inventories coupled with an increased pace of scrapping could lead to a turning point for tanker markets in the second half of 2018, according to Frontline chief executive Robert Macleod.

THE shipping industry has welcomed the European Council's approval of the revised emissions trading system, which includes only a forward-looking caveat for shipping. The German Shipowners' Association said it was up to the International Maritime Organization to agree to an effective and realistic decarbonisation strategy.